U of T researchers at Ontario Economic Summit to talk innovation, training students for 'jobs of the future' 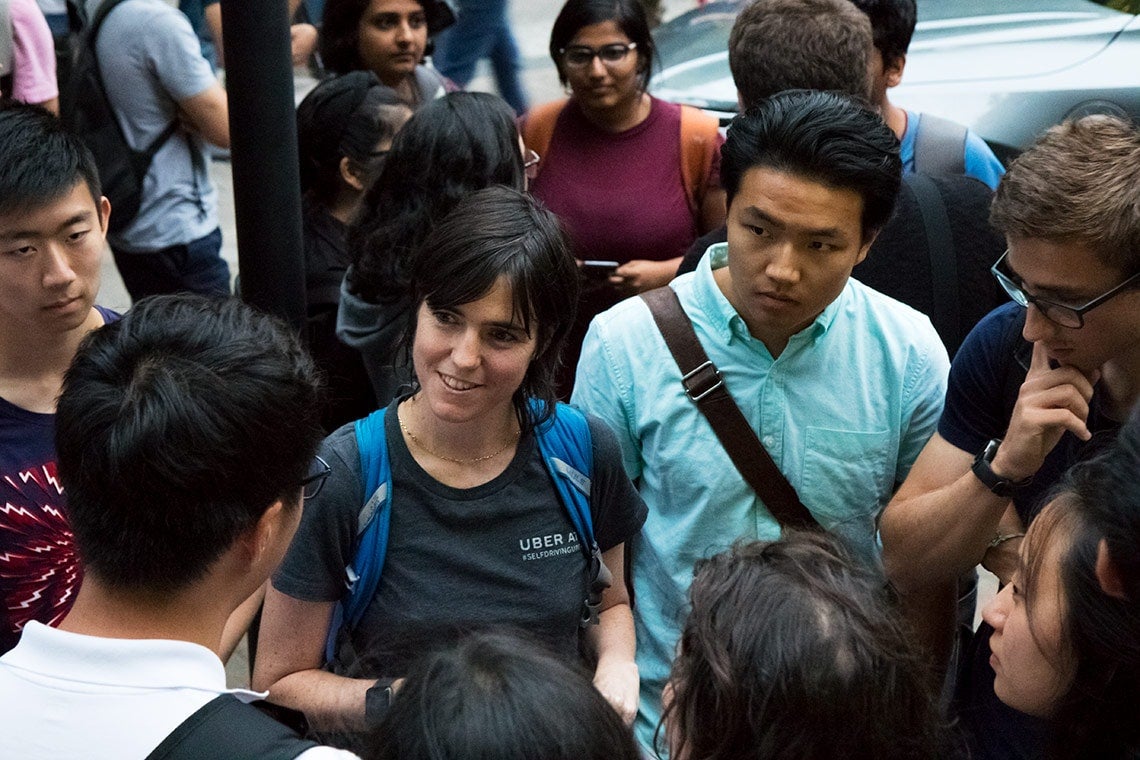 U of T's Raquel Urtasun, who heads Uber's self-driving car lab in Toronto, fields questions from eager students at a career event in September. She is among the U of T speakers at this year's event (photo by Chris Sorensen)

The University of Toronto is taking centre stage at this year’s Ontario Economic Summit as government officials, business leaders and key influencers meet to discuss how to take advantage of new technologies and disruptive business models to promote the province’s growth.

Organized by the Ontario Chamber of Commerce, the annual event is one of the biggest meetings on the economy in the province, featuring addresses from Premier Kathleen Wynne and several members of her cabinet, as well as appearances by other party leaders and representatives from Canada’s biggest companies.

U of T, one of the event’s presenting partners, kicked off the three-day summit in Niagara-on-the-Lake this week by underscoring the critical role the university and other post-secondary institutions will play in driving Ontario’s knowledge economy forward. “Collaboration between academic researchers and industry is a key ingredient in Ontario’s future economic success, allowing new innovations to move more quickly from the laboratory into the private sphere, and training students for the jobs of the future,” said Vivek Goel (left), U of T’s vice-president of research and innovation, who delivered the conference’s opening remarks.

Thanks in part to groundbreaking research at institutions like U of T, Toronto and the surrounding region have emerged as a global innovation hotspot in potentially disruptive fields like artificial intelligence, or AI, regenerative medicine, sustainable energy and fintech, among others.

In the case of AI, Toronto is already well-known for its contributions to deep learning, a branch of AI that mimics the human brain and allows computers to make inferences from datasets without being specifically programmed. The technology, pioneered by U of T University Professor Emeritus Geoffrey Hinton, who also does AI research for Google, is expected to revolutionize a number of industries, from health care to transportation.

In a bid to capitalize on an early lead, U of T earlier this year partnered with the federal and provincial governments, as well as industry, to create the Vector Institute for artificial intelligence research in Toronto.

At the summit, U of T's Raquel Urtasun, an associate professor of computer science and a founding member of Vector, is scheduled to deliver an overview of AI technologies and what they mean for governments and businesses. She will then participate in a panel discussion that looks at the impact of AI on productivity and how best to capitalize on it.

Urtasun, one of AI’s stars, was tapped earlier this year to head up ride-sharing giant Uber’s new self-driving car lab in Toronto – an example of how U of T’s research prowess is luring big, multinational companies to Ontario.

“Uber is here because the talent for innovation in AI and self-driving cars is here,” Urtasun told U of T News in September. She went on to say that Toronto and the surrounding region “has all the right things to become a Silicon Valley of AI.”

Other foreign firms that have either set up shop in Ontario or have dramatically increased their presence in recent months include: pharmaceutical giant Bayer, which is teaming up with Versant Ventures to launch BlueRock Therapeutics, a US$225 million bet on regenerative medicine that will be headquartered in Toronto, as well as New York and Boston, and helmed by U of T researchers Gordon Keller and Michael Laflamme; U.S. health giant Johnson & Johnson, which last year opened the first international location of its JLABS life science incubator in Toronto through a partnership with U of T; and Fujitsu Laboratories Inc., which recently said it was setting up a research and development centre in Toronto in partnership with U of T that will be focused on quantum-inspired computing.

But it’s not just big multinational firms who are capable of turning top talent and groundbreaking research produced by institutions like U of T into high-paying jobs and stable economic growth. The university is also at the centre of a vibrant entrepreneurship ecosystem that’s helping to grow the next generation of great Canadian companies.

In the case of CDL, affiliated with U of T’s Rotman School of Management, the system it developed to rapidly scale science-based startups has been so successful it’s been expanded to business schools across the country, from Vancouver to Halifax. CDL also recently announced its first U.S. location through a partnership with New York University’s Stern School of Business.

U of T is also home to a new ONRamp co-working and collaboration space, located across the street from the MaRS Discovery District. The facility is open to entrepreneurs from across U of T’s three campuses as well as those from partner institutions at McMaster University and Western University.

Among the successful startups that have emerged from U of T’s ecosystem in recent years are: satellite provider Kepler Communications; AI-powered legal research firm Ross Intelligence; WinterLight Labs, which uses AI to analyze speech and track cognitive disabilities; and Deep Genomics, which uses AI to help search for disease cures. Pooja Viswanathan, who did her post-doc at U of T, co-founded Braze Mobilty, which makes obstacle detection devices for wheelchairs (photo courtesy Braze Mobility)

One entrepreneur who has benefited from U of T’s entrepreneurship ecosystem is Pooja Viswanathan, the CEO of Braze Mobility.

Her startup, co-founded with U of T's Alex Mihailidis, a senior scientist at the Toronto Rehabilitation Institute, sells obstacle detection systems that can be attached to wheelchairs, which are often bulky and difficult to manoeuvre. Braze's devices provide users with more freedom to move about without fear of crashing into people or objects.

Viswanathan, who did her post-doctorate in U of T’s computer science department and is scheduled to appear at the summit as part of an entrepreneur showcase, said Braze not only received considerable support from U of T’s Impact Centre incubator, but that Toronto’s Discovery District in general was an ideal place to launch a health technology company.

“I wouldn’t have gone anywhere else,” she said. “We really have an innovation corridor on University Avenue. We were just steps away from MaRS, the rehab sciences department at U of T, as well as Toronto Rehab.

“It’s been really critical for us, actually – the location we’re at – because we’ve been able to tap into all of these resources, which have all supported us to some extent.”