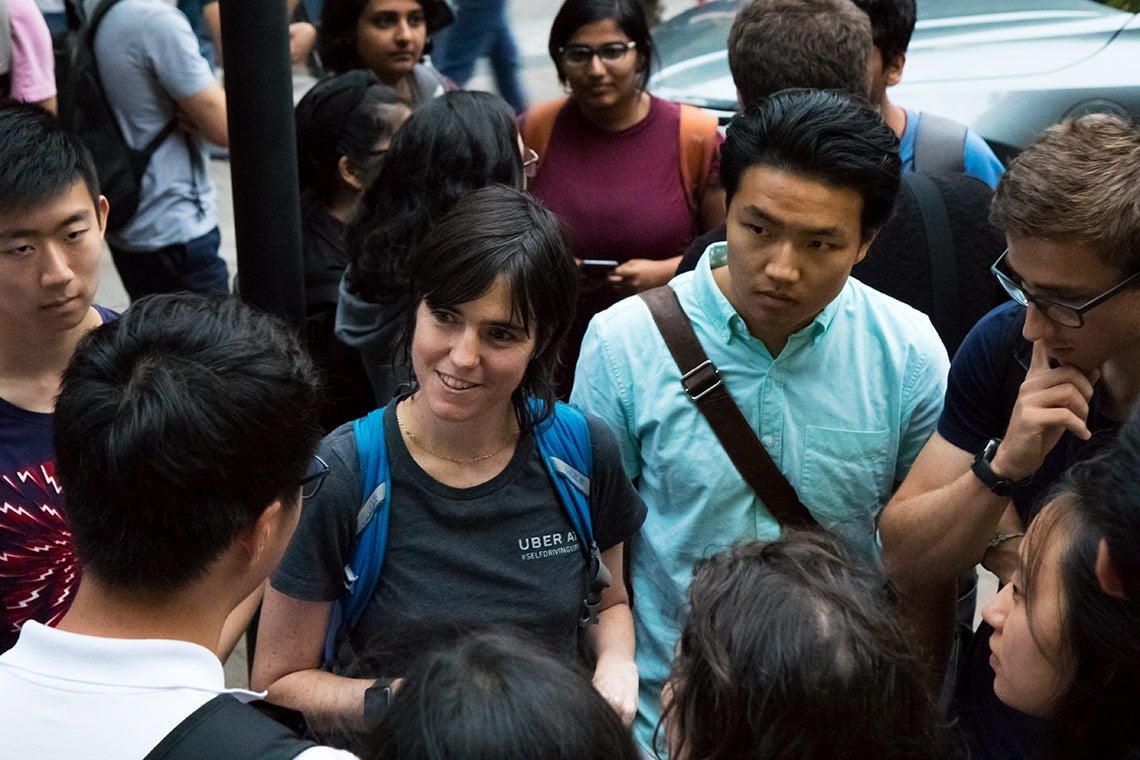 Raquel Urtasun, an associate professor at U of T and the head of Uber's self-driving vehicle lab in Toronto, fields questions from students following her presentation (photo by Chris Sorensen)

A recruitment event by Uber at the University of Toronto this week began as a lecture and ended like a celebrity sighting.

Raquel Urtasun, the head of Uber’s new self-driving vehicle lab in Toronto, was engulfed by dozens of eager, resumé-clutching students immediately following a presentation about her research at the ride-sharing giant.

The scrum occurred shortly after Urtasun, who is also an associate professor of computer science at U of T, told the packed auditorium to head outside to see one of Uber’s sleek, gun metal-coloured test cars, complete with a spinning sensor array strapped to the roof.

She only managed to walk about 15 metres before she was surrounded – one of the many ways Urtasun’s life has changed since she was named head of Uber Advanced Technologies Group Toronto earlier this year.

“My life has become much busier,” Urtasun acknowledged in an interview prior to the event.

“I travel to do academic events and I also travel because we [Uber] have three different sites – Pittsburgh, San Francisco and Toronto.”

An expert in machine learning and computer vision, Urtasun is a walking example of U of T’s – and Canada’s – prowess in the suddenly hot field of artificial intelligence, or AI, and is a key reason why Silicon Valley giants like Uber and Google are setting up research labs across the country.

“Uber is here because the talent for innovation in AI and self-driving cars is here,” Urtasun said.

In just the past four months, Uber ATG’s Toronto operation has grown from a staff of nine to more than 30, including research interns, according to Urtasun. Uber ATG's website shows postings for five additional positions in Toronto.

Urtasun, who was born in Spain and has lived in Europe and the United States, said Toronto is on the cusp of being a global tech centre thanks in part to its leading universities, cultural diversity and a Canadian immigration system that makes it easier to bring in foreign talent.

“Toronto has all the right things to become a Silicon Valley of AI,” she said. “What we’re seeing right now is governments, businesses and academia are understanding this fact. We see important companies coming to Toronto like Uber or Google Brain, but, at the same time, more startups and Canadian businesses are also benefiting.”

A key component of the Canadian strategy was the creation of the Vector Institute for AI research earlier this year. It’s a partnership between U of T, the province and Ottawa, as well as private sector players like Uber. Its goal is to attract, train and retain AI talent in Canada.

Said Urtasun, one of Vector’s co-founders: “We’re developing the ecosystem and training more students such that we can move this even farther.” If this week’s Uber career event was any indication – U of T’s career centre said more than 250 attended – there’s plenty of enthusiasm among U of T students and researchers to participate in Canada’s AI revolution.

Alina Ma, a fourth-year engineering science student at U of T, said she is inspired by the fact that Urtasun is occupying such a leadership position in a male-dominated industry.

“It makes you feel more represented,” she said.

For Urtasun, meanwhile, working at Uber has given her the opportunity to tackle real-world problems she previously could only guess at in the classroom – some of which she discussed during her 30 -minute presentation.

“It’s really taken my research and the research of my students to the next level,” she said.

“If we solve those problems, our impact will be tremendous.”