Bayer, Versant back commercialization of stem cell therapies in Toronto: "We go where the science is best" 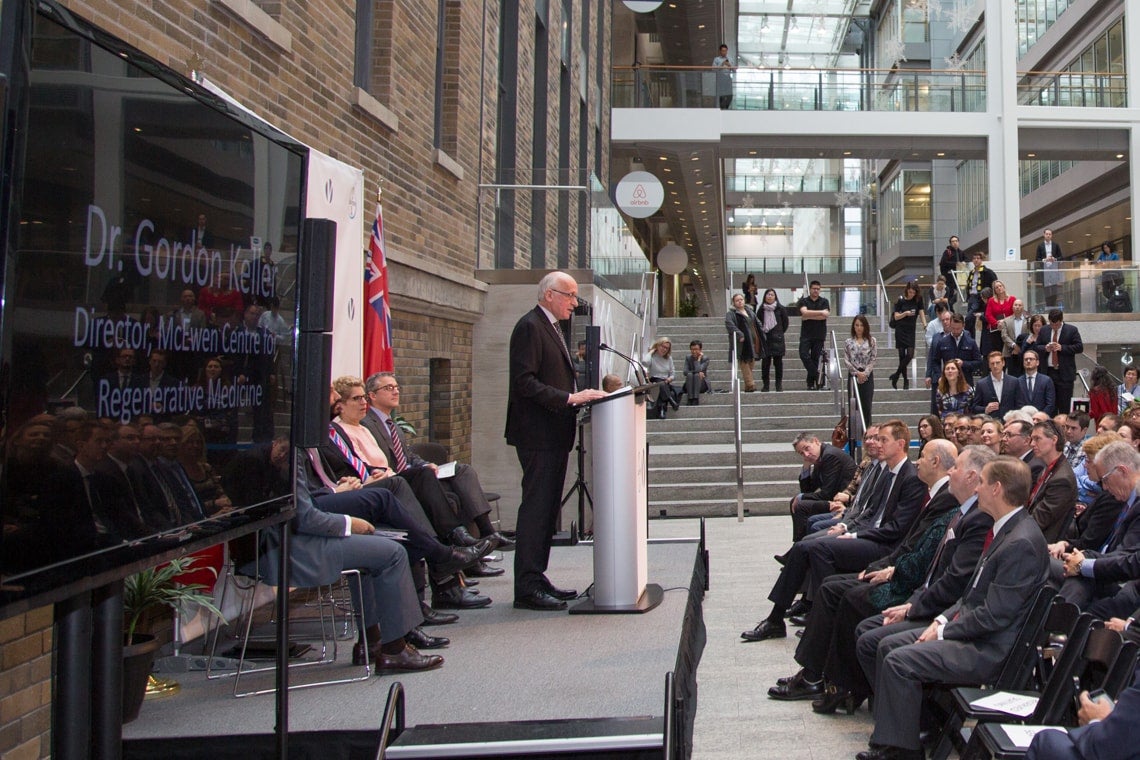 Professor Gordon Keller, director of the University Health Network's McEwen Centre for Regenerative Medicine and a world authority on stem cells, speaks at the announcement today at MaRS Discover District (all photos by Johnny Guatto)

At US$225 million, it’s one of the largest investments the biotech world has ever seen – and it positions Toronto as a world leader in the development of regenerative medicine therapy, experts say.

Pharmaceutical giant Bayer AG and venture capital firm Versant Ventures today announced the creation of  a company that will turn stem cell science into real-world treatments. BlueRock Therapeutics will be based in Toronto’s MaRS Discovery District, as well as in New York and Boston. The company will first work on developing new treatments for the heart and for degenerative brain disease.

“Why Canada? Why Toronto? The answer is simple,” said Jerel Davis, a managing director at Versant Ventures. “We go where the science is best.”

The four-year financial commitment is the second-largest initial investment in a startup in the history of the biotechnology industry, according to officials of Versant Ventures. The U.S.-based funders said they chose Toronto for the new firm because of the city’s strength in regenerative medicine research.

“We all know Canadian scientists are world renowned in how stem cells can be used to repair damaged tissue,” said Navdeep Bains, federal Minister of Innovation, Science and Economic Development. “The considerable investment being made now is validating that expertise.”

The investors said they were attracted to Toronto because of the regenerative medicine “dream team” of Gordon Keller and Michael Laflamme. Keller, director of the McEwen Centre for Regenerative Medicine at the University Health Network and a professor of medical biophysics at the University of Toronto, is a world authority on stem cells. He is perhaps best known for turning embryonic stem cells into heart cells – a crucial first step in the quest to use stem cells to repair heart muscle in patients who have had heart attacks. Laflamme, a senior scientist at the Toronto General Research Institute and an associate professor in U of T's department of laboratory medicine and pathobiology, is at the forefront of developing pioneering techniques to transplant these cells safely and successfully.

“This tremendous news confirms again that the world is taking notice of the remarkable research and talent base here in Toronto, anchored by the University of Toronto and its partner hospitals, and nurtured by key institutions such as MaRS," said U of T President Meric Gertler. "And it builds on the landmark $114-million grant through the Canada First Research Excellence Fund for our Medicine by Design project, which demonstrates the federal government’s strategic approach to supporting research clusters of truly world renown.” 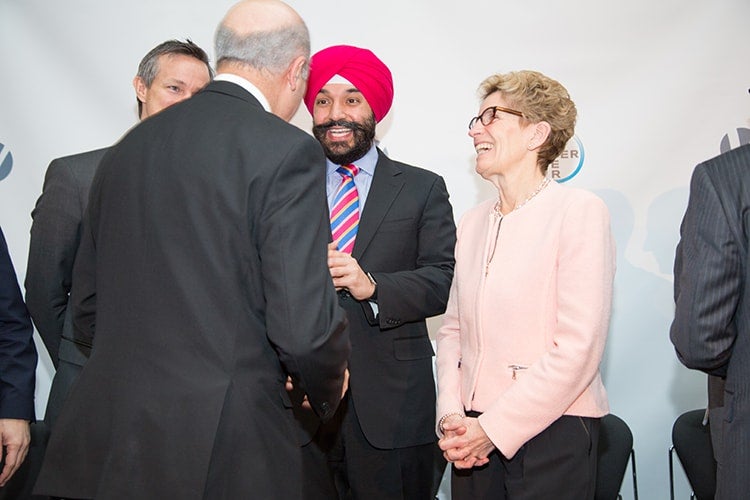 Premier Kathleen Wynne and federal Minister of Innovation, Science and Economic Development Navdeep Bains were part of the announcement for the US $225 million investment in stem cell therapies for heart and degenerative brain diseases

Bains praised the initiative as a model for the kind of investment Canada wants to attract. He was joined during the announcement at the MaRS Discovery District by Ontario Premier Kathleen Wynne.

“This new venture has the potential to impact the lives of people affected by heart disease around the world,” Wynne said “I am pleased that Bayer and Versant selected Ontario to conduct this important research. It will create good jobs and economic growth, and illustrates the confidence global companies have in Ontario’s business environment and capacity for innovation.”

As one of its first priorities, the new company will work with CCRM – a Toronto-based not-for-profit that advances regenerative medicine – to create cells to rebuild muscle damaged by heart attacks and chronic heart failure. That effort will draw on Keller’s expertise creating heart muscle cells derived from stem cells.

“We have closely tracked the field of regenerative medicine for the past five years and believe the time is right to invest in stem cell therapies given recent breakthroughs in cell differentiation, manufacturing and engineering,” said Versant’s Davis. 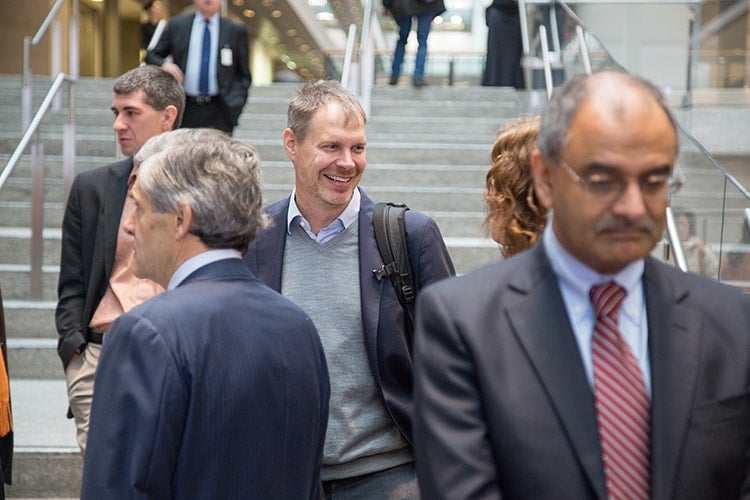 Toronto has been a centre for stem cell research starting with the 1960 identification of blood stem cells by biophysicist James Till and hematologist Ernest McCulloch, both of U of T and the Ontario Cancer Institute/Princess Margaret Cancer Centre. This discovery was instrumental in the use of blood stem cell transplants to treat diseases such as leukemia.

In the decades since the Till and McCulloch discovery, stem cells have come to be seen by scientists as potentially offering ways to treat – and perhaps cure – a host of devastating and costly illnesses such as cardiovascular disease, cancer, diabetes, blindness and neurodegenerative disorders.

In 2015, the federal government gave the University of Toronto the largest single research award in its history – $114 million – to support Medicine by Design, an ambitious initiative led by Professor Peter Zandstra, and including cross-disciplinary researchers such as Professor Molly Shoichet to advance the design of cells, materials and therapeutics to reach this goal.

It harnesses the exceptional expertise at U of T and its affiliated hospitals and fosters unique multidisciplinary collaborations to generate new discoveries in regenerative medicine. Through strategic investments and partnerships, it is also creating a pipeline from research to commercialization that will enable Canada to realize the full value of its research advances and bring them to the world.

And Toronto is home to John Dick, a professor of molecular genetics and UHN researcher, who pioneered the field of cancer stem cells when he discovered them first in human leukemia and next in colon cancer and Keller, who was lured home from New York in 2007 to lead the McEwen Centre for Regenerative Medicine.

The centre was established in 2003 with generous donations from Rob and Cheryl McEwen with a mission to act as a catalyst for regenerative medicine by facilitating collaboration, supporting research and promoting awareness of the field.  Today, it includes 15 scientists from U of T and five hospitals, focusing on the treatment of heart disease, diabetes, respiratory disease and spinal cord injury.

"I truly believe that establishing BlueRock Therapeutics at this time is both a visionary and a bold move that will lead to new therapies for the treatment of cardiovascular disease," Keller said. "It will go a long way, be a major step forward to establishing Toronto as a global leader in regenerative-medicine based therapeutics." 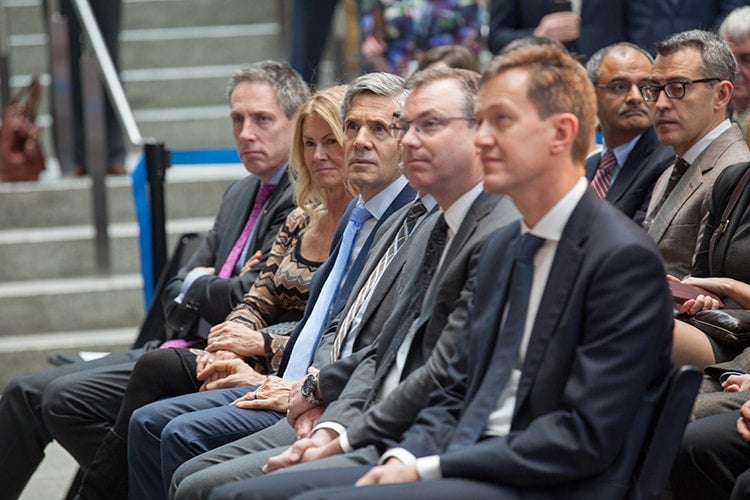