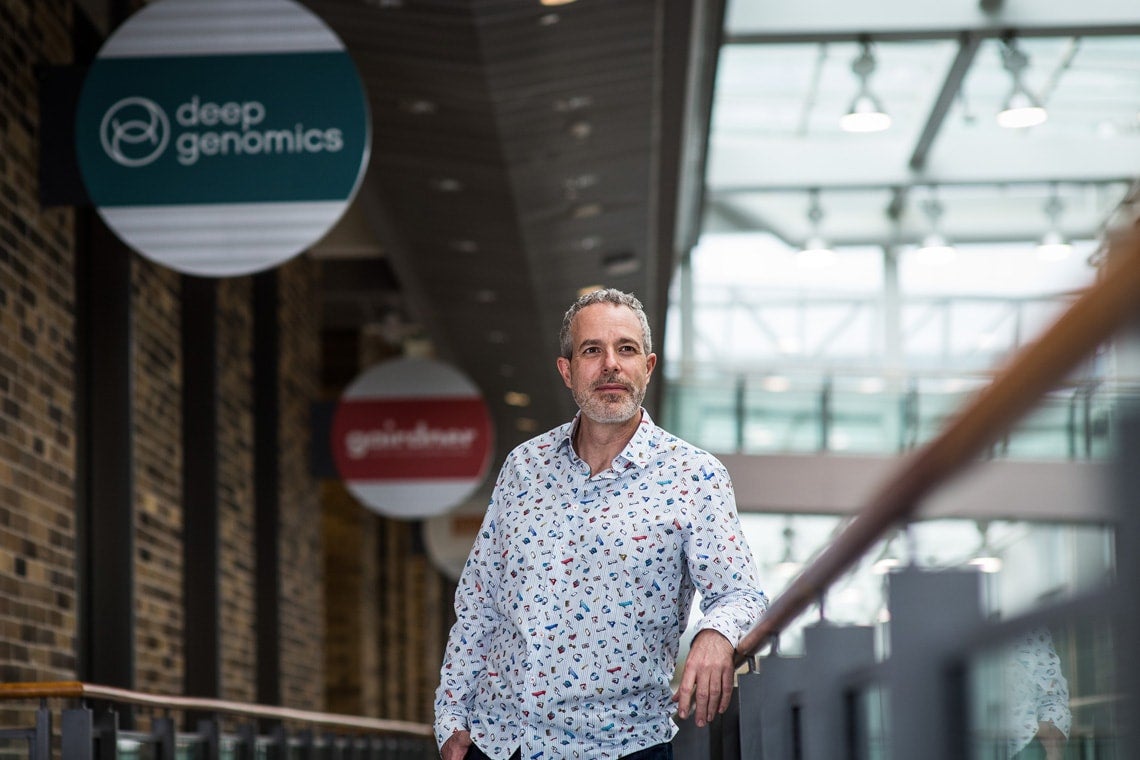 U of T Engineering Professor Brendan Frey is the founder and CEO of Deep Genomics, a startup company applying deep-learning techniques to revolutionize genomic medicine (photo courtesy of Deep Genomics)

Genetic mutations are the cause of countless diseases and disorders, from cancer to autism to cystic fibrosis.

Now, startup company Deep Genomics is applying decades of research into machine learning and genomic science to develop genetic medicines – accelerating treatments that address the root causes of these conditions.

“If you have smoke billowing out of the tailpipe of your car, you don’t just put a filter on the tailpipe – you have to look under the hood and address the original problem,” says Brendan Frey, the co-founder and CEO of Deep Genomics, and a U of T engineering professor with cross-appointments in the department of computer science and the Donnelly Centre for Cellular and Biomolecular Research. “That’s what we’re doing: applying our platform for the discovery-phase development of medicines that address genetic problems.”

Developing new drugs is expensive, slow and inefficient – when researchers identify a protein involved in a disease, pharmaceutical companies often use a ‘guess-and-test’ approach to see whether any of the known drug molecules in their arsenal is a match to the protein’s unique shape. Often, thousands of molecules need to be screened in order to generate a match.

Frey’s team at Deep Genomics is looking at the first biological step in the process: at the genes that contain the blueprints for proteins and instructions on how and when to produce them.

“There are many ways a protein could be causing a problem, resulting from different changes to the genome. We can see those changes at the level of individual genes,” says Frey. “Instead of focusing on proteins, we’re focusing on the genetic mutations that are the source of the problem.”

Most new drugs fail in clinical trials, and the cost of developing a new drug is over $2.5 billion.

Frey hopes that by harnessing the massive amount of genetic data that has become available since the human genome was sequenced in 2001, Deep Genomics can help pharmaceutical companies significantly cut down on the number of failures, and pinpoint the winners earlier. The company plans to collaborate with pharmaceutical companies to develop compounds.

Frey is also a co-founder of the recently formed Vector Institute, an academia-industry-government centre that solidifies Toronto’s position as a global hub for artificial intelligence research and development. With over $200 million in funding, the institute builds on U of T’s long-standing strength in branches of AI such as deep learning, machine learning, neural networks, augmented reality, self-driving and autonomous vehicles and robotics.

“I think in the next 10 to 20 years, almost all aspects of Canadian society will be impacted by artificial intelligence, from farming to medicine to education,” says Frey. “Artificial intelligence, and deep learning in particular, is the best way to interpret data and then make rational, good choices. As the amount of data grows in all areas of society, AI will play a crucial role in making that happen.”

“So far, we’ve been focusing on our core technology: using machine learning to gain new insights into how mutations anywhere in the genome contribute to disease conditions,” says Frey. “Now it’s time to use that platform to help pharmaceutical companies develop genetic medicines for some of these conditions that affect millions of people.”