U of T Entrepreneurship Week: 10 startups to watch 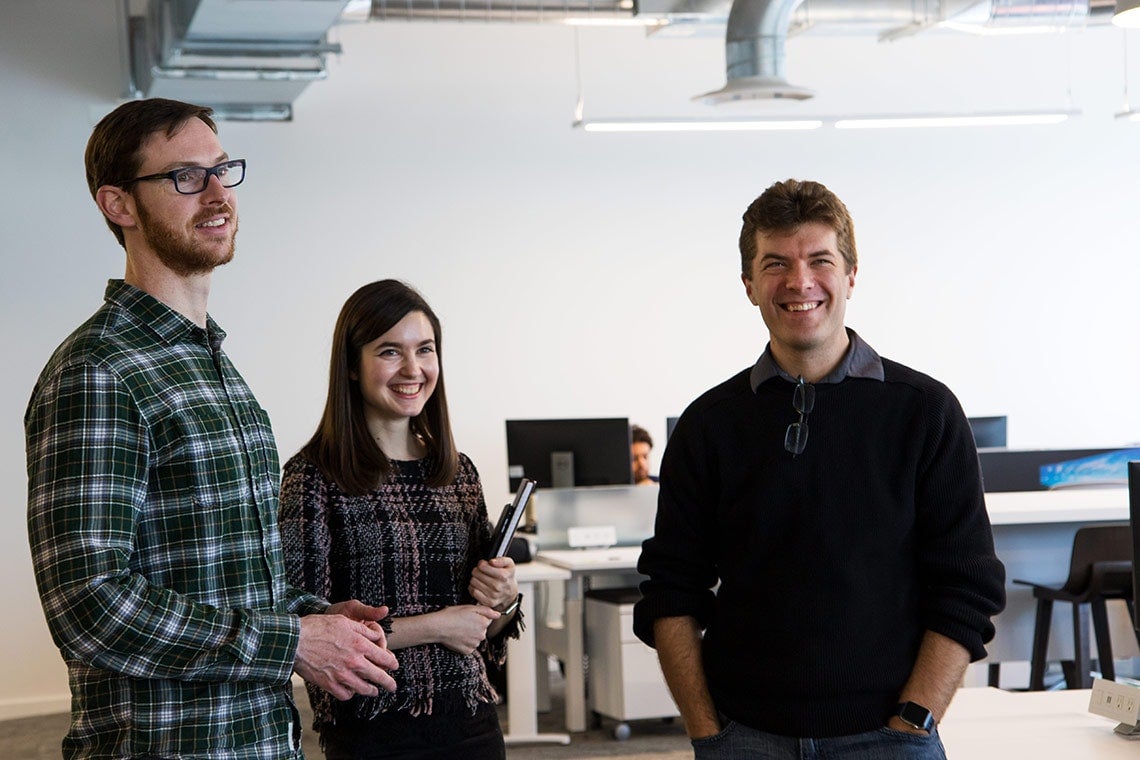 As a leading research institution with nine accelerators, it should come as no surprise the University of Toronto is a hotbed of startup activity.
Over the past five years, more than 150 companies have been created. In total, they've generated more than $500 million in investment.
So, with Entrepreneurship Week under way, here are 10 exciting U of T startups to keep your eye on:

WinterLight Labs (main photo) hopes its unique technology can greatly improve the way dementia is detected and tracked, including for diseases like Alzheimer’s, which contributes to as many as 70 per cent of cases.
The startup – founded by Liam Kaufman, Katie Fraser, Maria Yancheva and Frank Rudzicz, an assistant professor of computer science and a rehabilitation scientist at the University Health Network – uses artificial intelligence, or AI, to monitor speech patterns of patients and look for signs of cognitive decline.
“Speech and language are among the most accurate lenses into somebody’s state of mind,” Rudzicz told U of T News.

The test developed by WinterLight requires patients to describe a picture shown to them on an iPad while the software analyzes their speech, looking for pauses and other telltale signs.
An estimated 50 million people around the world suffer from dementia, according to the World Health Organization. So it’s little surprise WinterLight has already received considerable interest from operators of senior care residences and big pharmaceutical companies. Co-founders Manmeet Maggu and Rahul Udasi were studying engineering at the University of Waterloo when Maggu received devastating news from family in India: His young nephew Praneit had cerebral palsy.
So the pair set to work on developing a child-sized robotic exoskeleton to help Praneit walk.
“Why do mechatronics engineering if you can’t build something to help someone?” Maggu told U of T News last year. “That is the kind of impact that you want to have in life.”

It wasn’t until they got to U of T, where Maggu did an MBA and Udasi a master’s in engineering, that the idea to launch a startup was born.

Since then Trexo Robotics has been racking up pitch competition wins and steadily moving toward the commercialization of its “Iron Man” exoskeleton for kids. Nanoleaf made a splash when it designed what it described as “the world’s most energy efficient lightbulb.”
But the U of T startup, co-founded by U of T's Gimmy Chu, Tom Rodinger and Christian Yan, has since branched out with the launch of Aurora LED panels, which can be arranged like a wall-mounted art installation.
There’s even a model that can be programmed in time to music.
“Every time the bass hits, it will flash the panels,” Chu, Nanoleaf’s CEO, told U of T News. “Or you could have another one where, depending on the frequency of sound it hears, it will pop the light in a different way, so you can feel the music.”
Nanoleaf is now looking at smaller square panels that could be used to cover an entire wall – no more lamps, pendants or overhead fixtures needed. Founded back in 2006 by Allen Lau and Ivan Yuen, Wattpad’s free app allows users to write and share stories.
The startup, based in Toronto, also has a studio to co-produce TV and movies based on its content with industry partners.
“Entertainment is in a period of disruption, and how people find and experience stories is evolving,” Lau, Wattpad's CEO, said in a recent statement.
Wattpad recently closed a US$51 million round of financing led by Chinese Internet giant Tencent Holdings, with some observers now valuing the company at US$400 million. Artificial Intelligence, or AI, is poised to revolutionize any number of industries. But nowhere is the impact as potentially important as in the field of medicine.
Deep Genomics, co-founded by Brendan Frey, a professor in the Faculty of Applied Science & Engineering, is using the power of machine learning to help develop genetic medicines for diseases ranging from cancer to autism.
“If you have smoke billowing out of the tailpipe of your car, you don’t just put a filter on the tailpipe – you have to look under the hood and address the original problem,” Frey told U of T News about the need to develop medicines that address the genetic roots of many illnesses.
Deep Genomics, which recently raised US$13 million to fund its expansion, plans to do just that by applying its machine learning algorithms to the wealth of genetic data collected since the human genome was sequenced nearly 20 years ago. Many startups talk about “launching” a new product, but Kepler Communications is one of the few that can claim to have actually put theirs into orbit.
The U of T startup, co-founded by Mina Mitry and Jeffrey Osborne, successfully deployed one of its nanosatellites aboard a Chinese rocket in January.
The launch was a first step toward the company’s goal of building a constellation of low-cost data communications satellites. Ultimately, Kepler envisions commercial opportunities helping railroads and shipping companies, among others, track their equipment.
“You get a little awe-inspired when you actually put something in orbit,” Osborne recently told U of T News. “That’s pretty cool.” Co-founders Bin Liu and Arjun Mali drew on personal experiences when coming up with the idea behind the BuzzClip, a wearable sensor that detects obstacles for blind and partially sighted people.
Liu’s father was diagnosed with inoperable glaucoma, while Mali worked at an orphanage and school for the blind in India.
“Our goal is to create a long-lasting impact for communities living with blindness or partial sight, empowering them to lead a confident and independent life,” Mali once told U of T News.
The BuzzClip uses ultrasound to detect obstacles in the user’s path and warns them through vibrations.
iMerciv took home the grand prize in a Telus pitch competition last fall, saying it planned to use the funds to boost sales and marketing efforts, and expand its customer base in the 11 countries where it has customers. ROSS Intelligence aims to make lawyers better at their jobs.
The startup, co-founded by Andrew Arruda, Pargles Dall’Oglio and Jimoh Ovbiagele, uses artificial intelligence and speech recognition technologies to speed up legal research, which currently relies on key word searches.
The idea was conceived as part of a course-based project after U of T’s computer science department was selected to take part in an international competition to find novel applications for IBM’s Watson cognitive computing platform.
ROSS ended up taking second place overall.
Now headquartered in California, ROSS earlier this year returned to Toronto to launch a research and development lab.
“We want to work with the best and the brightest,” Ovbiagele told U of T News. “Canada – and Toronto – is the best place to do that.” Benjamin Alarie, of U of T’s Faculty of Law, is co-founder and CEO of Blue J Legal (photo by Lisa Sakulensky)

Blue J Legal’s origins are closely intertwined with those of ROSS Intelligence, the other legal startup on this list.
Co-founder and CEO Benjamin Alarie, of U of T’s Faculty of Law, was invited to be a judge on a panel for the U of T portion of the same IBM competition that spawned ROSS. It was there that Alarie recognized the power of AI to re-shape the legal profession.
Fast forward to today and Blue J has two different products on the market – one that uses AI to predict the outcome of tax law cases, and another that focuses on employment law.
The goal is to eventually expand Blue J’s prediction technology to all areas of the law, making its practice far more accurate and efficient.
“This is about making the law work better,” he told U of T News. The Nymi Band uses a person’s heartbeat as a biometric identifier to wirelessly log them into computers, phones, tablets and any number of other password protected devices.
Yet, while originally launched as a consumer product, the startup co-founded by Karl Martin and Foteini Agrafioti is now focused on industrial manufacturers – starting with Big Pharma.
“You have workers who are entering passwords 100 times per shift,” Martin says of pharmaceutical companies’ need to create an audit trail for regulators.
Martin says the company has already conducted pilot projects with most of the world’s top 20 pharma companies and is “preparing to go full deployment this year.”