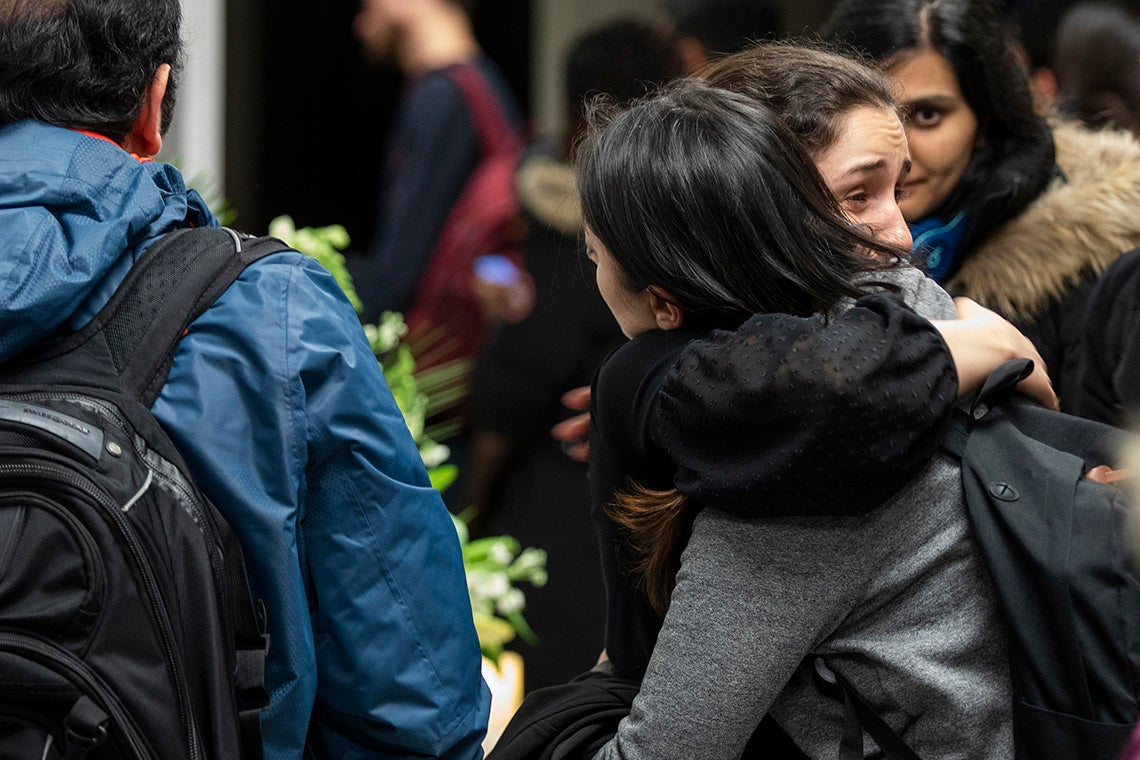 There were tears, fond recollections and poignant messages of remembrance at the University of Toronto’s Multi-Faith Centre on Friday evening as members of the community gathered to mourn the loss of those killed in the recent downing of Ukraine International Airlines Flight PS752.

Students and faculty members were among those who spoke at the ceremony, which took place three days after tragedy that killed all 176 passengers and crew, including 57 Canadians.

Eight members of the U of T community, including six students, were among those whose names were on the plane’s passenger manifest. 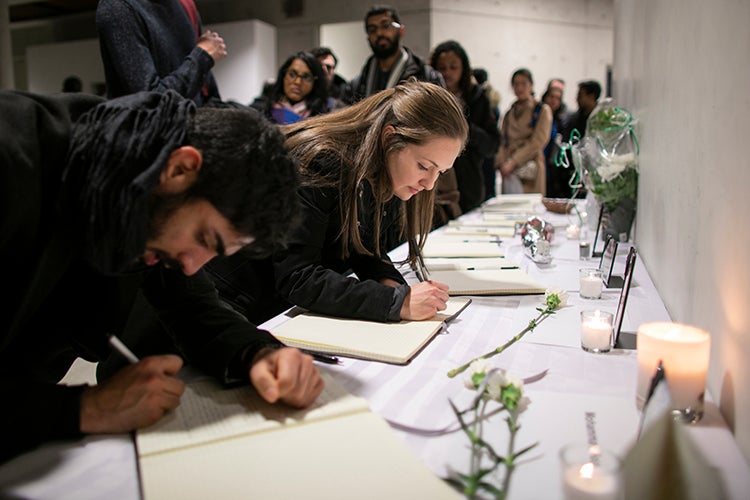 The ceremony, which was also attended by Elizabeth Dowdeswell, the lieutenant governor of Ontario, began with a reading of the names of the eight members of the U of T community who died in the crash:

Photos of the victims were projected on a screen in the front of the room, which was packed to capacity. Others watched the ceremony on a video feed in a separate room. 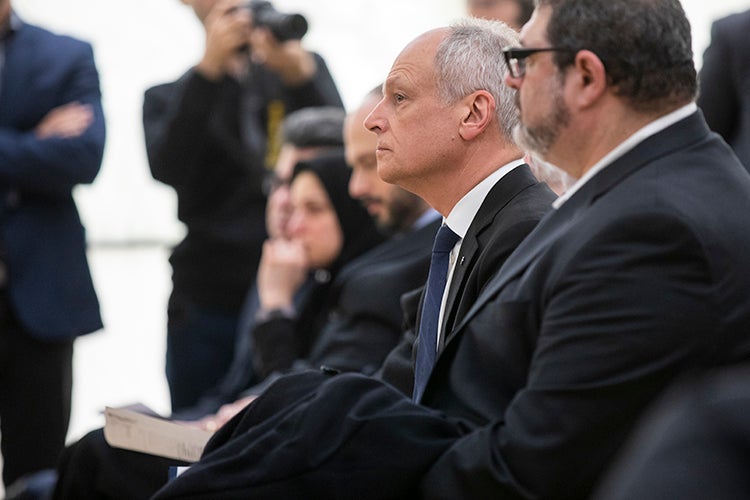 “We stand together in offering our sympathy, our compassion and our support,” President Meric Gertler said in his remarks.

“If there is any solace to be taken from this sad and difficult evening, it is that we have gathered as a caring and concerned community, led by our students and embracing our differences.”

President Gertler said he had received messages of condolences and sympathy from government and university leaders from across Canada, “and universities literally across the globe.”

“The academic world is a tightly-knit community … and that community is showing its support and solidarity at a time when it is badly needed,” he continued.

“To everyone here this evening, thank you for coming together to acknowledge this horrific tragedy, to mourn this unspeakable loss to our university, our city and our country, and to reaffirm our common humanity.” 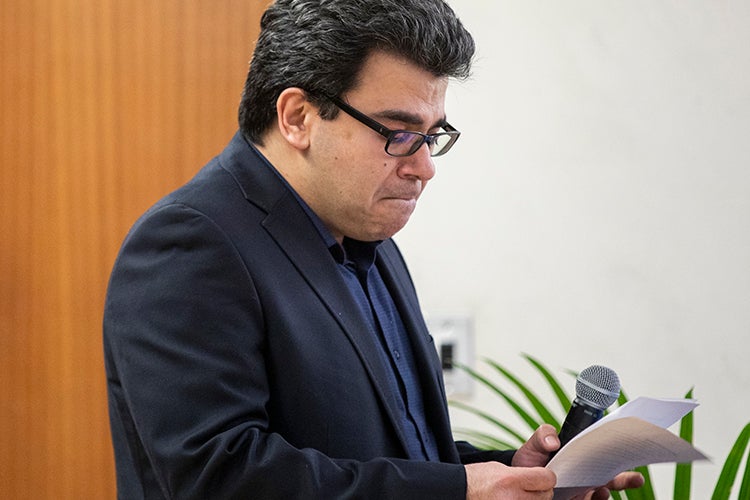 Professor Yashar Ganjali, of the department of computer science, reads a poem in Farsi and English (photo by Nick Iwanyshyn)

Attendees then observed a moment of silence in remembrance of the lives lost after the lighting of a memorial candle.

Among those who took to the podium to speak was Professor Yashar Ganjali of the department of computer science. He remembered Mohammad Amin Beiruti, a PhD student in his lab, as someone who “cared about the impact of his research and wanted to make the world a better place.”

Beiruti was working on designing controllers for the next-generation internet, Ganjali explained.

Ganjali then delivered a moving recitation of a poem in both Farsi and English. He said the following:

“Where are you heading in such a haste?” the desert flower asked the breeze.

“My heart is in torment here. Don’t you wish you could get away from this dusty desert?”

“It’s all I long for, but what can I do with my feet tied like this – where are you going in such a haste?”

“Wherever it may be except here, where I am.” 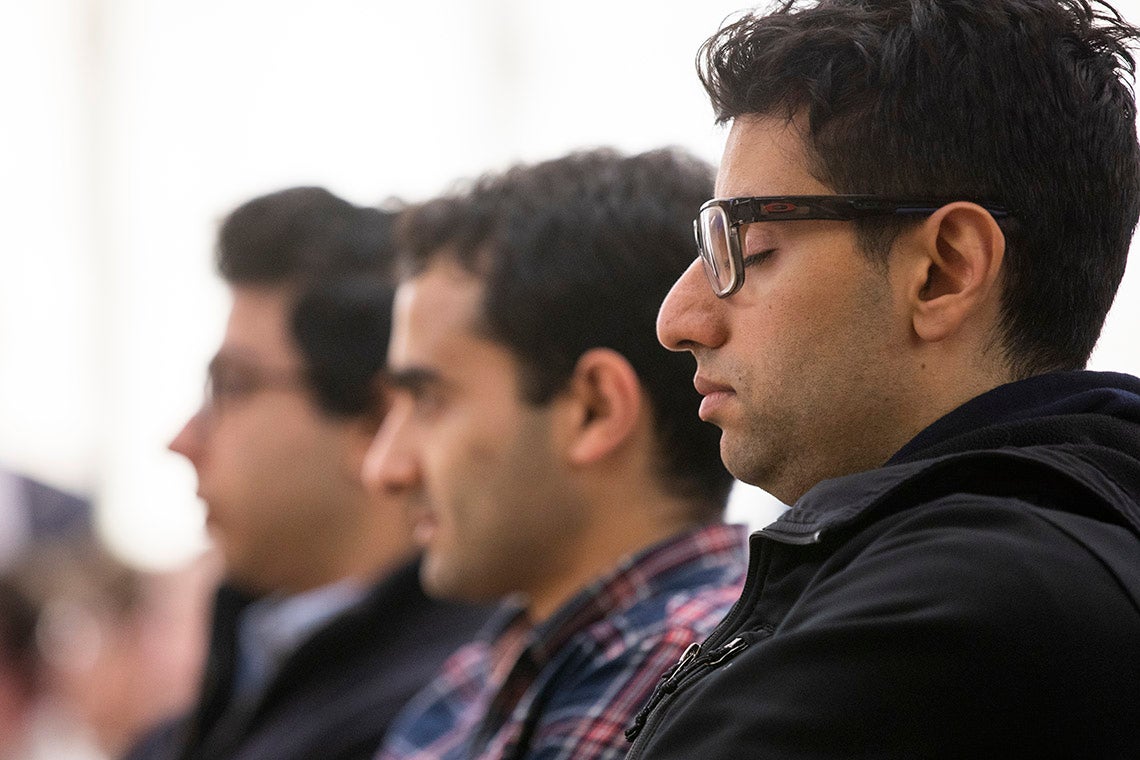 On Jan. 12, an Iranian community memorial ceremony is scheduled to take place at Convocation Hall.