Gender equity and leadership: Women to make up more than half of U of T’s deans 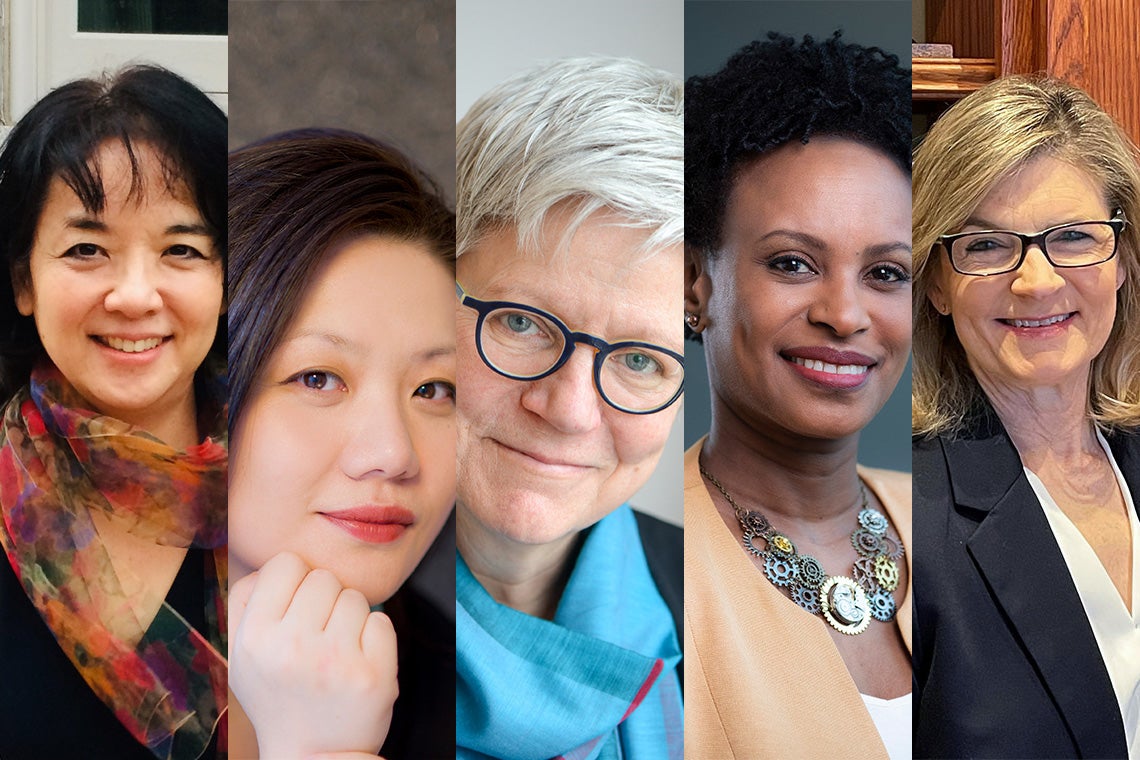 As part of an ongoing effort to support equity, diversity and inclusion in leadership, U of T's recent dean appointments have included (from left to right): Ellie Hisama, Juan Du, Jutta Brunnée, Rhonda McEwen and Gretchen Kerr.

When she was studying violin as an undergraduate student, all of the pieces Ellie Hisama played were composed by men – though she didn’t necessarily recognize them as male composers. She just saw them as composers. Then she heard Ruth Crawford Seeger’s String Quartet 1931.

It was as if somebody flicked on a lightbulb.

“When you see something that’s different, it helps you realize the context in which you’ve been living, thinking and working,” she says.

The epiphany prompted her to devote much of her career to studying Seeger and other musicians whose work was left out of the canon because of their status as women, people of colour or LGBTQ+.

Hisama, who is currently teaching at Columbia University, will be joining the University of Toronto this summer as dean of the Faculty of Music – one of several women who have recently been appointed as deans in recent months. Others include: Jutta Brunnée at the Faculty of Law, Juan Du at the John H. Daniels Faculty of Landscape and Design, Gretchen Kerr at the Faculty of Kinesiology & Physical Education and Rhonda McEwen at U of T Mississauga.

Even with no further hires, that means more than half of U of T’s deans will be women once all the recently announced appointments take effect later this year.

Cheryl Regehr, U of T’s vice-president and provost, says the recent appointments are part of a larger, ongoing effort to diversify leadership positions across the university.

“We are so amazingly fortunate to have this wonderful group of leaders joining us,” she says.

“It speaks to the strength of the candidates whom the University of Toronto is able to attract and the progress we have made in creating an inclusive environment at the university, although we still have a long way to go.”

The share of women faculty at the university has grown to 46.9 per cent, according to the latest internal numbers – nearly six points higher than the national average as measured by Catalyst Canada. And, two years ago, U of T moved to address a pay gap between men and women tenure-stream faculty, increasing the base salary for more than 800 women following an analysis by the Provostial Advisory Group on Gender Pay Equity.

Yet, while U of T has made progress, there is still much work to be done, Regehr says. She noted, in particular, that women continue to be under-represented at U of T in the rank of full professor.

“We need to continue working to create an equal playing field and to ensure that students can see themselves reflected in both the faculty and leadership at the university,” she says.

The focus on women in leadership positions is part of a much broader effort by U of T to support equity, diversity and inclusion across its three campuses. That includes everything from plans to hire 20 additional Black and Indigenous faculty members in the upcoming academic year – bringing the total number hired through four phases of a Diversity in Academic Hiring fund to 100 – to creating a new Institutional Access Office to acknowledge and address the historic exclusion of equity-deserving groups from the university community.

U of T also launched an anti-Black Racism Task Force to examine systemic anti-Black racism at the university and make recommendations to advance Black inclusion and excellence. A similar group focused on anti-Semitism was struck a few months later. And U of T helped co-ordinate a first-of-its-kind national dialogue focused on tackling anti-Black racism in Canadian post-secondary education that involved nearly 60 partner institutions.

“The goal, broadly, is to benefit from a diversity of thought, diversity of approaches and diversity of life experiences as contributors to academic excellence,” Regehr says. 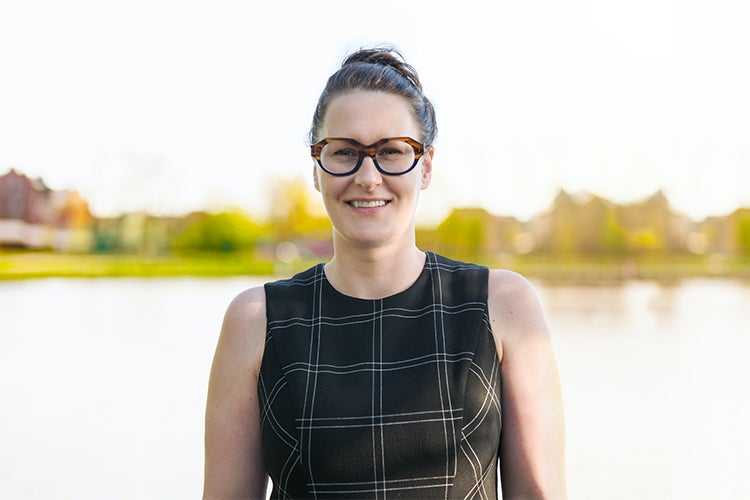 Alexandra Gillespie, who became the first female principal of U of T Mississauga last spring, says the campus seeks to support the research and well-being of equity-deserving groups (photo by Julia Bewcyk)

U of T is also making significant progress among its appointed employees. More than 65 per cent of U of T workers self-identified as women, according to the latest internal data. The survey also notes that the rate of promotions went up for women, LGBTQ2S+ and people with disabilities.

Kelly Hannah-Moffat, U of T’s vice-president of human resources and equity, says an inclusive culture among staff, faculty and librarians is critical for achieving excellence as an institution.

“We want the composition of the U of T community, particularly in positions of leadership, to reflect our vibrant and diverse student body and the Greater Toronto Area,” she says.

“We are committed to diversifying our leadership and addressing the under-representation of female, Black, Indigenous and racialized leaders among staff, faculty and librarians by creating new opportunities for career advancement that strengthen our commitment to excellence through inclusion.”

The long road toward the equal representation for women at U of T goes back more than 130 years, when the Ontario government mandated that women be admitted to University College amid a heated debate over women’s right to higher education. In 1884, 11 women were allowed to enroll at the college and attend lectures, but were forbidden from standing at bulletin boards, using the reading room or browsing the library catalogue. They were also required to get the president’s permission to join clubs.

In the 1970s, women were finally admitted to Hart House and the same decade saw them begin to fill senior positions at the university in significant numbers. Ground-breaking historian Jill Ker Conway, who established U of T’s first history course focused on women, was named the university’s first woman vice-president in 1973. Pauline McGibbon and Eva MacDonald were the first two female chancellors, a position now occupied by Rose Patten who previously broke through glass ceilings on Bay Street and served for nine years on U of T’s Governing Council, including three years as chair.

In a more recent historical first for women at U of T, Alexandra Gillespie became the first female principal of U of T Mississauga last spring, moving into the principal’s official residence, Lislehurst, which was built one year after women were admitted to U of T.

Gillespie says she sees the progress made at U of T whenever she enters a room of senior leaders – or these days, a Zoom call – and sees more women and people of colour.

“You can’t stop saying that this is an issue,” she warns. “At U of T, we’re always talking about excellence. But if you look at the upper echelons of any organization and see that its leadership is of one [particular] race, gender, sexuality etc. – that’s not excellence, that’s just privilege.”

Beyond ensuring fairness in hiring at U of T Mississauga, Gillespie is looking to fund programs to support the research and well-being of equity-deserving groups.

“This is us putting our money where our mouth is,” she says. “This is providing actual resources, time, funding and so on to address historical and ongoing inequity.”

At U of T Mississauga, the three highest ranking administrators – Gillespie, Amrita Daniere, dean and vice-principal, academic, and Saher Fazilat, chief administrative officer – are all women. And that will continue to be the case once McEwen, whose personal website displays the Latin phrase, Propterea quod qui audet adipiscitur (Because she who dares, wins), takes over as dean on July 1. Director of U of T Mississauga’s Institute of Communication, Culture, Information & Technology, McEwen first joined U of T’s Faculty of Information in 2010 after completing her PhD at U of T. She and Bryan Stewart, the former vice-principal, research, developed proposals to support faculty returning to work after pregnancy or parental leave. McEwen later became a special adviser to the vice-president and principal of U of T Mississauga on anti-racism and equity.

“The proposals were ignited by the fact that gender equity is among the most well-documented challenges within the academy and child-care commitments often affect the career trajectory of female researchers,” McEwen says, adding that she saves space on her research team in the Faculty of Information for women to work on STEM projects and gain credit as published academic authors. 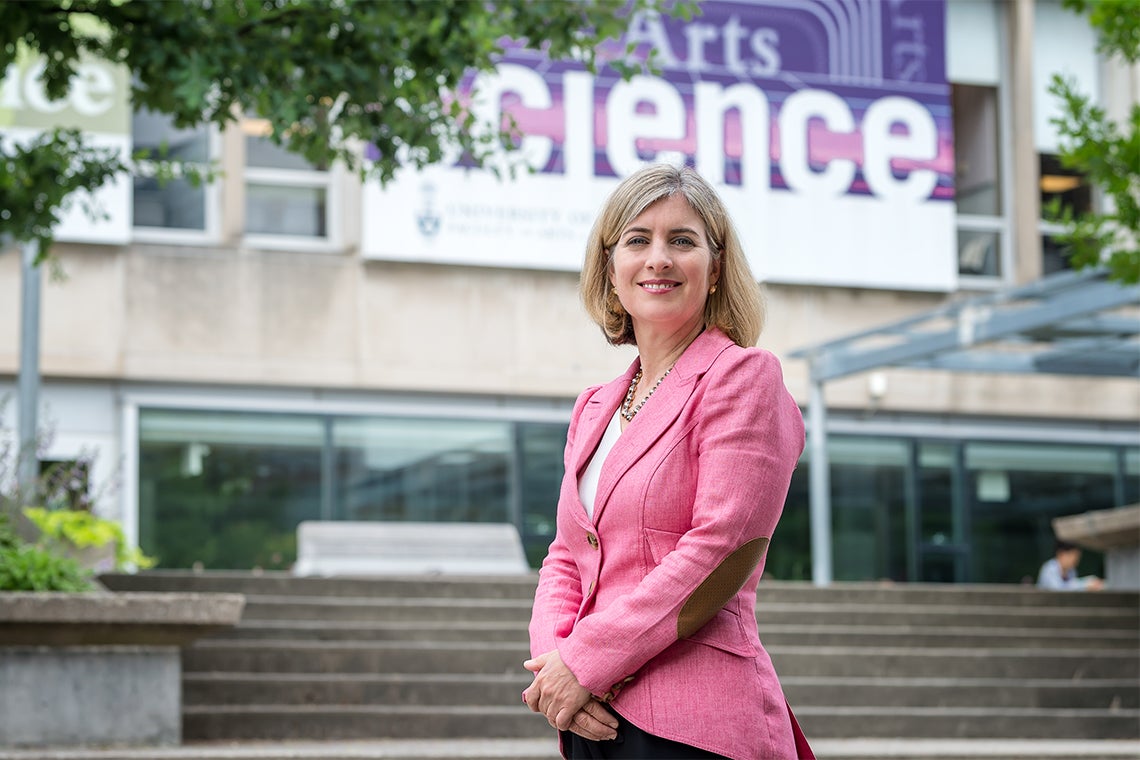 Melanie Woodin, the dean of the Faculty of Arts & Science, U of T’s largest faculty, expanded the portfolio of vice-dean, faculty and academic life to include equity and is taking steps to promote more women into leadership roles (photo by Frost Williamson-Dickies)

Melanie Woodin is another senior leader at U of T who is looking at ways to ensure that women don’t encounter barriers to advancement at the university. The dean of the Faculty of Arts & Science – U of T’s biggest faculty – she oversees a group of over 900 faculty and almost as many staff.

Woodin says the faculty follows best practices to ensure a deep pool of candidates. But she is also taking steps to address the cumulative inequalities that might narrow the candidate pool and present barriers to women’s representation.

“We’ve significantly increased the hiring of women into assistant professor positions, but they are still underrepresented as full professors” she says. “So, what’s slowing their rate of promotion to full professor?

“Often, there are a series of relatively small challenges that add up.”

For example, she cites research showing that women in academia often aren’t assessed fairly for the work they do. “Women conduct a disproportionate amount of service, including service that is not formally recognized such as informal mentorship,” Woodin says. “That work is often really time consuming, but doesn’t factor into promotion decisions.”

One of her first acts as dean was to expand the portfolio of vice-dean, faculty and academic life to include equity, a position held by Alexie Tcheuyap. Under Woodin’s direction, the faculty is also looking at its internal processes for assessing faculty contributions and promoting females into leadership roles.

“One issue we’re looking at is: What sort of culture change do we have to make to ensure all faculty have the opportunity to be recognized as potential leaders,” Woodin says, adding that when vacancies appear in important academic positions, the faculty makes an extended list of qualified candidates – regardless of whether they have put their own names forward.

“We don’t rely solely on nominations because they [generally bring forward] those who look like a historical representation of previous leaders,” she says.

“When you start to broaden your definition of leadership, the results are incredible.”

For Hisama, who also begins her term as dean of the Faculty of Music on July 1, U of T’s commitment to equity and diversity didn’t just pique her interest; it was one of the reasons she applied for the job.

“In the candidate brief and in discussions with the search committee, I could tell diversity, equity and inclusion were front and centre,” she says.

At Columbia, Hisama founded a workshop for female high school students to learn to produce and record music with the university’s faculty and alumni. As the humanities representative on the Faculty of Arts and Sciences’ committee on equity and diversity at Columbia, she also helped call attention to women and BIPOC faculty’s concerns and, more recently, raised awareness around racism faced by Asian-Americans after COVID-19 by organizing a public panel titled “A New ‘Yellow Peril?’”: A Conversation about Anti-Asian Racism.

When she arrives in Toronto, Hisama says she’s looking forward to listening to the concerns of faculty and continuing to work toward equity, diversity and inclusion. She’s also enthusiastic to take her seat at the table as part of U of T’s growing cadre of women leaders.

“Historically there have been so few women and BIPOC in these roles,” she says. “I think it’s really exciting that U of T is striving to be a leader in this.”