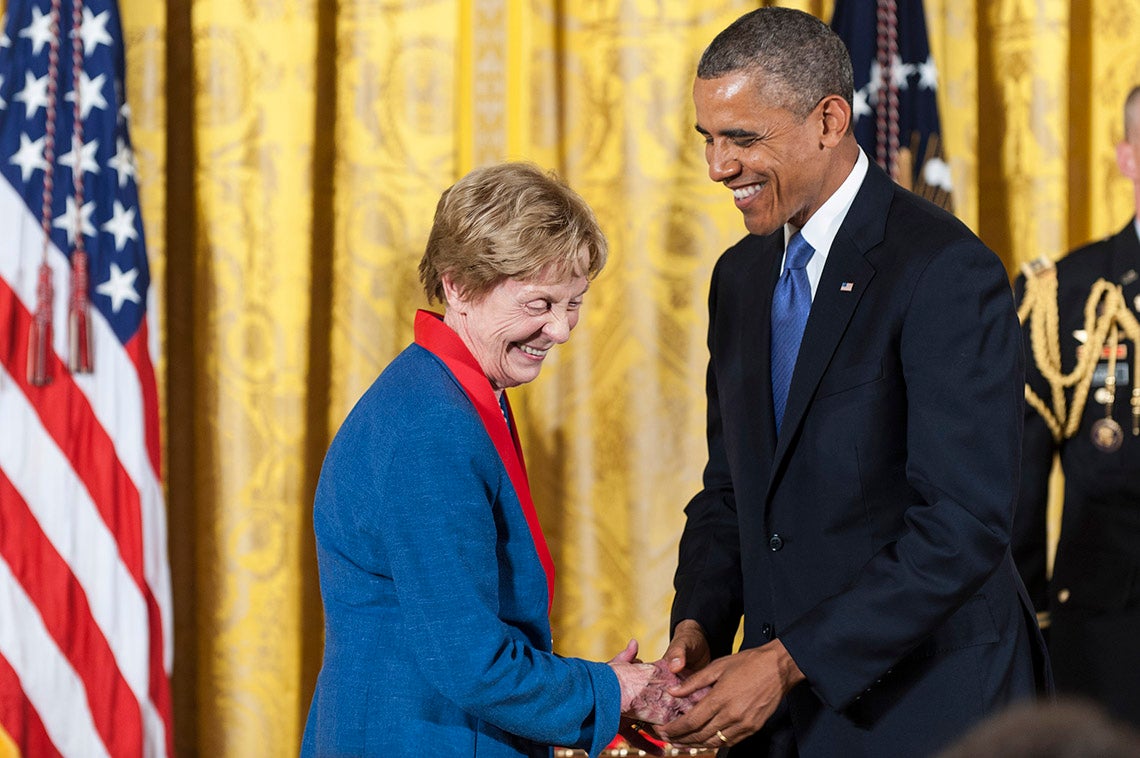 Jill Ker Conway receives a 2012 National Humanities Medal from U.S. president Barack Obama during a ceremony on July 10, 2013. Conway was recognized for her contributions as a historian and trailblazing academic (photo by Pete Marovich/Getty Images)

Jill Ker Conway was a groundbreaking historian, feminist, and author who accomplished many of her “firsts” while at the University of Toronto in the 1960s and '70s.

She helped establish U of T’s first history course focused on women, she was instrumental in the first major battle for pay equity for the university’s female faculty, and she was U of T’s first female vice-president.

Conway went on to become the first female president of Smith College in Massachusetts, and she wrote – in addition to her academic publications – a successful three-part autobiography. The first volume about her early life in Australia, The Road from Coorain, was a bestseller and was made into a movie.

“She was a trailblazer,” says Nicholas Terpstra, a professor of history at U of T who is a past chair of the history department. When Conway arrived in the mid-1960s, “this was a very, very traditional kind of institution, and it needed people who could show a different way of doing things,” he says.

Her creation, along with colleague Natalie Zemon Davis, of the first U of T course on the history of women, was “absolutely a watershed moment” for the department, Terpstra says. Up to then, the women’s viewpoint had been essentially “written out of the [historical] canon.”

Conway and Davis planned an undergraduate course covering several hundred years of history to the present, and scoured rare book libraries for historical accounts written by women. “Every document had to show a woman speaking about her time,” Conway wrote in the second volume of her autobiography, True North. The idea was to present an alternative to the traditional historical perspective where women’s lives were “a simple addition to the male narrative,” she wrote.

The first session of the course, in the fall of 1971, was a major event on campus. It had to be moved to a larger lecture hall because 200 students showed up, double what was expected. The reading list took on a life of its own, and was widely circulated and used by many other academics as source material for courses across North America.

Linda Kealey, a former student of Conway’s who is now a professor emerita of history at the University of New Brunswick, says “everybody was pretty hyped up and excited” about the new course, which proved there was a treasure trove of material written by women. Kealey, who took the course in 1972, still has a copy of the syllabus. As a mentor, Conway (pictured right in 1977) was “very warm and encouraging of young women in particular, but she also encouraged young men,”  Kealey says. She prodded female students to take risks and step out of their comfort zones, an especially important role when there were so few women faculty.

Conway also became an advocate for pay equity at the university, after a successful confrontation with the history department over a delay in her own promotion to associate professor – long after male faculty with the same qualifications had received promotions and pay increases. She later convened a meeting of female faculty, and the group analyzed salary data to present clear evidence of discrimination to the university.

When she became U of T’s vice-president of internal affairs in 1973, Conway was able to put in place the changes she had worked toward as a faculty member. She implemented a pay equity program, and to make sure the issue was dealt with fairly she used a rigorous system that compared the pay of female faculty to male counterparts who had similar academic and publishing experience. Conway was also instrumental in the creation of the first official on-campus daycare.

In her autobiography, Conway describes the pressures she faced as the first female senior administrator, and the unrealistic expectations some groups had for her. She noted that she was a disappointment to some feminists because she didn’t support the creation of a separate Women’s Studies program – she felt it was better to encourage academic work focusing on women within each department.

In addition to the heavy workload in her daily job, Conway was in great demand as a speaker. “Each time I talked to a wildly enthusiastic group of women…I came to see that the mere symbol of an office in a formerly male hierarchy assumed a meaning which went way beyond my personal identity,” she wrote.

Her colleague and long-time friend Zemon Davis says Conway was driven by altruism. “Jill was always interested in making things better for other people.” She had an impact because she had “an authority that came from her poise and her sense of confident worth,” Zemon Davis says. “She was firmly spoken but soft spoken [and] made her voice heard in an effective way.”

In addition, Conway was a “tall, beautiful, gracious woman,” with a great sense of humour, Davis says. “I thought of her as a lady, in the best sense of the word.”

Jill Kathryn Ker was born on Oct. 9, 1934 in Hillston, New South Wales, in southeastern Australia and grew up on a remote sheep station run by her parents. She was home-schooled by her mother and worked on the ranch with her father, but he died when she was 10. She and her two brothers and mother then moved to Sydney. She earned a degree from the University of Sydney, then decided to go to graduate school in the United States after being turned down for a job in the Australian foreign service.

Conway worked towards a PhD at Harvard, where she lived with a group of ambitious and brilliant women. Her graduate adviser was a key influence, she said in a 1989 radio interview, when he told his students that the contribution of women to intellectual life was as important as men’s. “[He] handed out lists of women whose lives needed to be studied and whose intellectual histories need to be written.…That was just a new world for me.”

It was at Harvard that she met her future husband, Canadian historian John Conway, who was 18 years older. When he took at job at the nascent York University in Toronto in 1964, she moved with him and got a position at U of T, initially teaching American history.

After a decade at U of T, ending with her stint as vice-president, Conway accepted the post of president of Smith College in Northampton, Mass., one of the most renowned women’s liberal arts colleges in the United States. She had been recommended for the position by her old friend Zemon Davis, who was a  Smith alumna. Conway was intrigued with the job, because much of her academic work had focused on the history of women’s education in the United States. As the first female president of Smith, Conway (pictured left in 1992) initially had to battle the patriarchal views of older male faculty. She worked tirelessly to raise money and build new facilities, and defended the role of an all-women college at a time when many were merging with male or co-ed institutions. “Women needed their own intellectual turf….on which to stand as they observed the world,” she wrote in the final volume of her autobiography, A Woman’s Education.

Conway streamlined the admission of older female students, and encouraged programs to help poor working mothers to attend. At the same time, she was supporting her husband, who fought mental illness and was hospitalized several times for the treatment of severe depression.

Conway’s public profile was so strong that she was named one of Time magazine’s dozen “Women of the Year” in 1975. In 2013 she was presented with a National Humanities Medal by U.S. president Barack Obama.

After leaving Smith in 1985, Conway became a visiting professor at the Massachusetts Institute of Technology focusing on environmental issues, and concentrated on writing books.  She also served on a number of boards, some non-profit and some corporate, including Nike, Merrill Lynch and Colgate Palmolive. She was intent on ensuring these companies improved their corporate social responsibility, says Jim Williams, one of John Conway’s nephews who now lives in Halifax.

Conway was very supportive of members of the extended family and gave “wise counsel” when they needed personal advice, Williams says. “She was a person who was really oriented to problem-solving and helping wherever she could, to family members and the broader community,” he said. “She was masterful at making things happen.”

One issue that meant a lot to Conway and her husband – he had fought and been wounded in the Second World War – was the plight of homeless veterans.  They supported the development of an apartment building in Washington, D.C., specifically for veterans. It opened in 2016 as the John and Jill Ker Conway Residence.

In writing her own autobiography, Conway strived to describe a complex woman’s experience, without sentimentality.

“I definitely wanted to create a counter-record to the soppy, sentimental notion of females,” she told the Globe and Mail in a 2002 interview. “I’m very much opposed to the school of psychology of women which argues that women don’t like taking risks, are not ambitious, are not interested in power, except for relational power.”  She knew from her research, she said, that women are “huge risk takers, filled with ambition, [and] excited by danger.”

Conway’s husband John died in 1995. The couple did not have any children.