Nine U of T startups that have raised big money 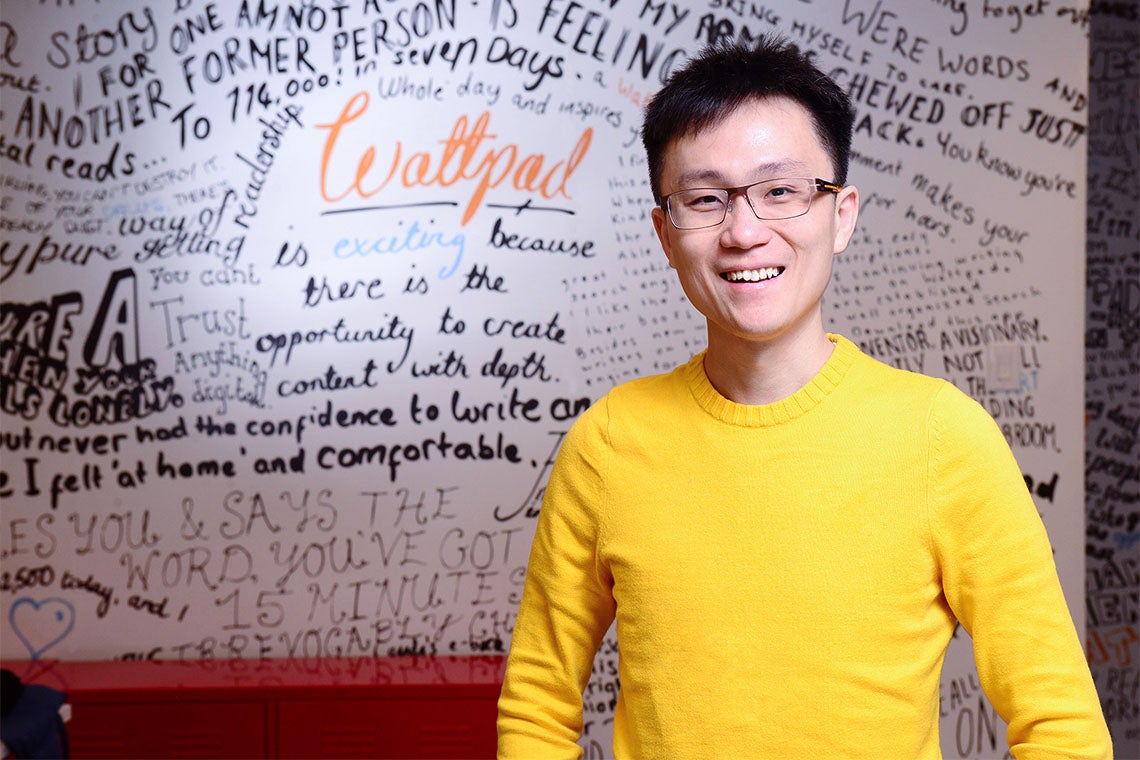 Allen Lau co-founded Wattpad with fellow U of T alumnus Ivan Yuen in 2006. With nearly 70 million monthly users, the story-telling platform raised US$51 million from investors in early 2018 (photo courtesy of Wattpad)

From drug discovery to helping entertainment companies develop the next hit TV show, entrepreneurs associated with the University of Toronto are solving key issues for some of the world's biggest industries. Others are hoping to forge brand new industries of their own.

No surprise then that many of their startups are attracting significant sums of money from investors. Over the past 10 years, U of T-affiliated startups have generated $1 billion in investment – a figure that continues to grow.

As U of T prepares to kick off Entrepreneurship Week next week, here are nine startups connected with the university that have recently raised significant sums to fund their growth.

The story-sharing platform created by U of T alumni Allen Lau and Ivan Yuen is forcing the entertainment industry to rethink the way it does business.

Originally conceived as an e-reader app, Wattpad now boasts some 70 million monthly users who write and read stories on the online platform – all while sharing their opinions about characters, dialogue and story arcs. Increasingly, the more popular stories and serials are being turned into hit novels, TV shows and Netflix movies.

In early 2018, Wattpad raised US$51 million from investors – money that it planned to use, in part, to develop machine learning algorithms that can be used to better identify content trends.

More recently, Wattpad announced it was launching its own book publishing imprint.

“Entertainment is in a period of disruption, and how people find and experience stories is evolving,” Lau said in a statement that accompanied details about the financing.

“With our global community of users, hundreds of millions of stories and data-driven approach to helping people and partners find great content, Wattpad is leading both sides of this equation.” The pharmaceutical industry has a problem – fewer research breakthroughs per research dollar spent – and Atomwise believes it has the tools to fix it.

The U of T startup, co-founded by alumnus Abraham Heifets, uses artificial intelligence to screen thousands of potential drug candidates in a fraction of the time needed by traditional methods.

Now based in Silicon Valley, Atomwise revealed last March that it had raised US$45 million from investors and was working with several major pharmaceutical companies.

It’s a long way from its early days at U of T, where the idea for the startup was forged during an entrepreneurship program run by the Impact Centre, one of nine entrepreneurship hubs on campus.

“The first couple of years were really, really tough,” recalled Heifets during a recent talk at U of T’s ONRamp co-working space for entrepreneurs.

“I have to say, without the Impact Centre, Atomwise wouldn’t exist. Our first office was a closet, but it was an office, and that was a big deal.” The size of a large loaf of bread, the first micro-satellite built by Kepler Communications was launched into orbit in early 2018.

Founded by a group of alumni from U of T’s Faculty of Applied Science & Engineering, Kepler followed up the feat with a second satellite launch last fall – and is in the midst of preparing for a third one this spring.

Ultimately, the plan is to put as many as 140 low-cost satellites in orbit over the next few years in a bid to provide connectivity to both Earth- and space-based businesses.

“Kepler is on a mission to connect the people and devices that gather the world’s information,” Kepler CEO Mina Mitry told U of T News back in 2017.

“We’re deploying the largest constellation of small telecommunications satellites to connect devices on the ground – like oil pipeline monitors – and devices in space like satellites that take pictures of the Earth.”

To help realize its vision, Kepler raised US$16 million from investors last fall – money that will be used to double the size of its workforce. Founded by U of T researchers, BenchSci also aims to speed the drug discovery process – though not in a laboratory setting.

Instead, the startup’s algorithms scan millions of data points in published research papers to look for promising targets.

“Without the use of AI, basic biomedical research is not only challenging, but drug discovery takes much longer and is more expensive,” said Liran Belenzon, the co-founder and CEO of BenchSci told Betakit earlier this year.

“We are applying and developing a number of advanced data science, bioinformatics, and machine learning algorithms to solve this problem and accelerate scientific discovery by ending reagent failure.”

BenchSci said last spring that it had raised US$8 million from a group of investors that includes Google’s Gradient Ventures.

Tom Leung, who did his PhD in epigenetics at U of T, got the idea for the company after struggling to find a suitable antibody for his experiments. BenchSci’s other co-founders include David Chen and Elvis Wianda. Blue J Legal uses AI to predict the outcome of tax and employment law cases, saving lawyers and their clients time and money.

The startup was co-founded in 2015 by three members of U of T’s Faculty of Law and an enterprise software developer. Professor Benjamin Alarie, the startup's CEO, got the idea after being asked to be a judge in an IBM Watson competition that was held at U of T.

Blue J, which has already turned several Canadian law firms onto Tax Foresight and Employment Foresight tools, raised US$7 million from investors last fall, and plans to use the money to help fund its expansion into the huge U.S. legal market.

“Our long-term vision is to have Foresight for every major area of legal research – insurance, bankruptcy, contracts, personal injury and so on,” Alarie recently told U of T News. CryptoNumerics was forged at U of T’s Creative Destruction Lab and uses AI to help companies in the financial and medical sectors crunch people’s data without compromising privacy.

The startup was co-founded last year by CEO Monika Holboke, as well as U of T alumni Jimmy Fan and Roberto Cervantes. Another co-founder is Hassan Bhatti, who helped launch CDL’s quantum machine learning program two years ago.

“Current approaches to de-identify data such as masking, tokenization, and aggregation can leave data unprotected or without analytical value,” said Holboke in a recent statement issued by the company.

She added that CryptoNumerics’ tools, by contrast, used “advanced anonymization techniques” to both protect data and maintain its utility.

The startup said this week it had raised US$2.5 million from investors. U of T University Professor Molly Shoichet’s startup could help reduce the need for doctors to prescribe opioids after surgery – a common practice that’s played a role in fuelling the current opioid epidemic.

The startup Schoichet co-founded with Mike Cooke, formerly a post-doctoral researcher in her lab, uses a gel to deliver – and hold – local anesthetic drugs near the site of surgical incisions, making them longer-lasting and more effective.

That, in turn, means many patients won’t require additional medication to deal with post-surgical pain.

“It’s actually a pretty high percentage of addicts who start taking these opioids early on for surgical reasons,” Shoichet recently told U of T News.

“If this could obviate the need for people to take opioids in the first place, it would have a real societal benefit.” Nanovista’s lipid-based system encapsulates two different imaging agents for use in computed tomography scans and pre-operative planning – a key tool in an era where cancer screening programs are identifying ever smaller cancerous legions that must be surgically removed.

“It also highlights the malignant lymph nodes the cancer has spread to.”

Alumnus and co-founder Oren Kraus based the two-year-old startup on software technology he developed during his PhD. The algorithm can quickly sort cells into distinct categories based on how protein molecules are distributed inside.

“Our method can be used to distinguish between cells that are growing normally from those that are not, but also for finding out whether or not a drug is working when applied to cells in culture,” says Kraus.

“The great thing is that our technique can be widely applicable to almost any type of disease.”

Phenomic AI, which received support from U of T’s UTEST program and the Creative Destruction Lab, raised US$1.5 million from investors last spring.