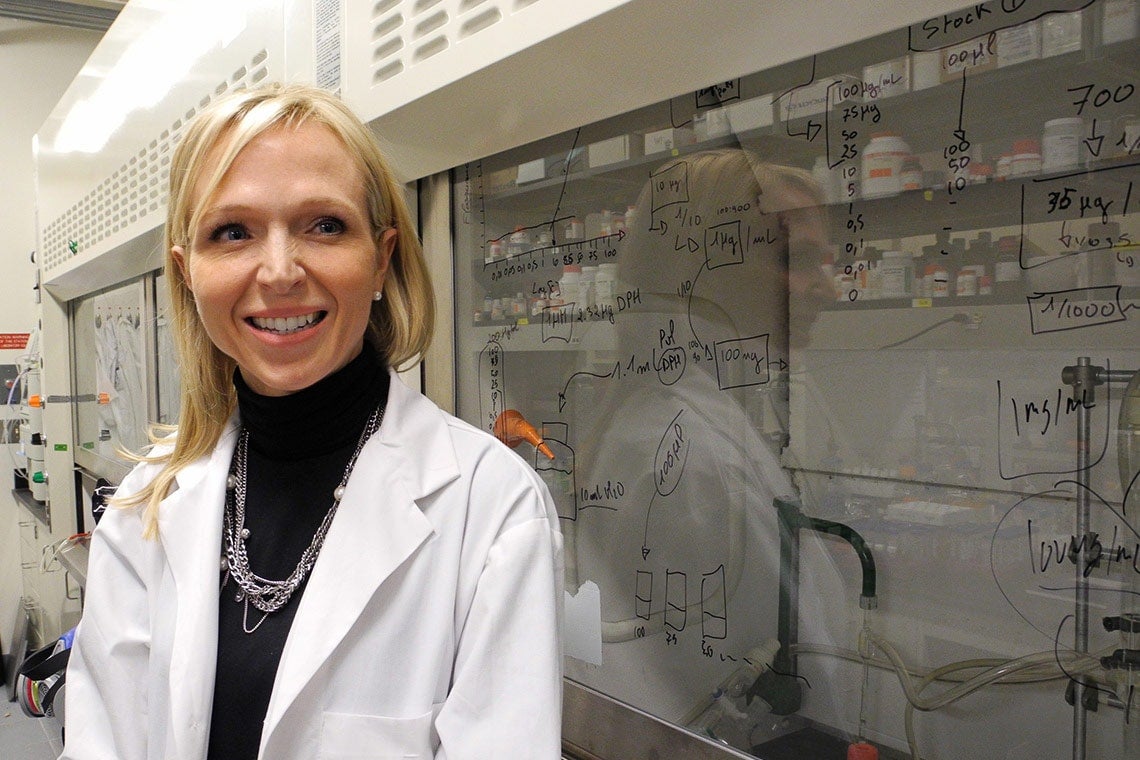 Christine Allen, a professor in the Leslie Dan Faculty of Pharmacy, co-founded Nanovista with David Jaffray and Jinzi Zheng. The company is developing an imaging agent to assist surgeons removing cancerous tumours (photo by Chris Sorensen)

A University of Toronto startup that uses nanotechnology to help surgeons identify and remove cancerous tumours has closed a $2.3 million round of financing – money that will be used to pay for a Phase 1 clinical trial.

The seed funding for Nanovista, which has developed a nanoparticle imaging agent, is being led by Toronto's GreenSky Capital, which invested $750,000 through two of its affiliated venture funds.

“It’s a homegrown, early-stage success story,” says Christine Allen, one of the startup’s three co-founders and a professor in U of T’s Leslie Dan Faculty of Pharmacy. “But we’ve still got a lot of work ahead of us.”

That includes wrapping up preclinical work by this summer and then, with the necessary approvals, proceeding to a Phase 1 clinical trial to test the technology’s effectiveness in head and neck, and lung cancer patients.

“It also highlights the malignant lymph nodes the cancer has spread to.”

Allen says the technology was developed after discussions with surgeons at Toronto’s research hospitals. The advent of screening programs for individuals at risk of certain types of cancer, including lung cancer, has resulted in ever smaller cancerous lesions being identified. That, in turn, presents a challenge to surgeons who are then charged with removing the malignancy.

“The surgeon goes in, but [the tumour] is difficult to see,” Allen says.

In addition to Allen, Nanovista’s founders include: Professor David Jaffray, a senior scientist at the Princess Margaret Cancer Centre and director of the Techna Institute for the Advancement of Technologies for Health, and Jinzi Zheng, who did her PhD at U of T in medical biophysics and was an assistant professor at the Institute of Biomaterials & Biomedical Engineering.

Nanovista was a member of the inaugural cohort at JLABS @ Toronto, the first international location of the life sciences incubator created by health giant Johnson & Johnson. (Allen is also involved with a drug delivery startup in JLABS called Pendant Biosciences.)

Allen said the support from JLABS @ Toronto, created in partnership with U of T, has been invaluable to Nanovista as it seeks to build its business. The same is true of the support provided by GreenSky and the local research hospitals, she said.

“I don’t think you’re going to find a better place to do this in Canada.”