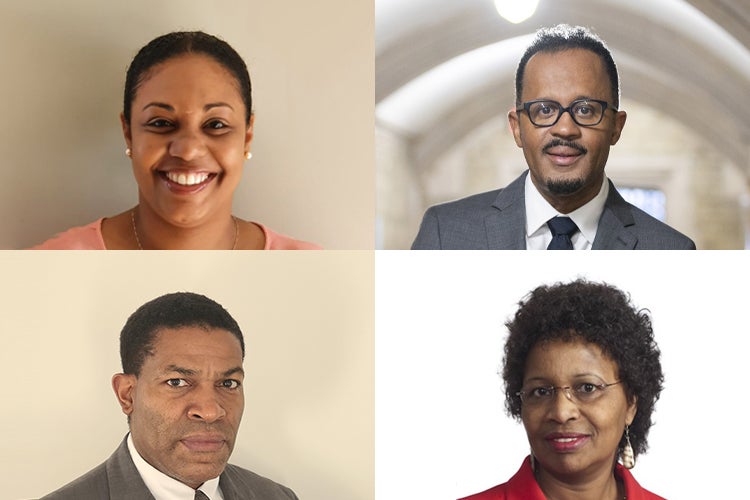 Members of the University of Toronto community are being invited to take part in the newly created Anti-Black Racism Task Force – an initiative that aims to identify and address anti-Black racism and promote Black inclusion and excellence across U of T’s three campuses.

The task force’s four co-chairs are seeking a wide range of perspectives in the group, including students, staff, faculty, librarians, instructors and researchers.

Participants will help capture the experiences of Black community members and identify the barriers they face at the university. They will also help deliver actionable recommendations to address Black racial inequities within the tri-campus community in a bid to advance Black equity, inclusion and excellence.

“We’ll be starting with a lot of wind behind our backs,” says Dexter Voisin, one of the co-chairs and dean of the Factor-Inwentash Faculty of Social Work.

“We have a clear sense of what the issues are and, because we are solution-focused, we are looking at making the best actionable recommendations.”

U of T community members who are interested in joining the task force, or would like to nominate someone else, are asked to apply online via the task force’s web page by Oct. 16. The nomination should describe one’s lived experience, research expertise, community leadership and any other qualifications that would make them a good fit for the role.

The group will meet at least once a month online until the spring, when it will report its findings and recommendations to Meric Gertler, U of T’s president, Cheryl Regehr, vice-president and provost, and Kelly Hannah-Moffat, vice-president, human resources and equity.

Because the meetings will be held remotely, it’s not necessary that the task force members live in the Greater Toronto Area.

Voisin, who has written extensively about systemic racism and structural violence, says anti-Black racism is a multi-faceted problem that can manifest in research, staffing, faculty representation and student access and support.

He adds that the Anti-Black Racism Task Force will aim to make a tangible impact – not unlike the recent Presidential and Provostial Task Force on Student Mental Health, which made important recommendations and paved the way for a new partnership with the Centre for Addiction and Mental Health.

“We’re not starting this work from scratch,” Voisin says. “We’ll be building on the prior work of other stakeholders across the university in addition to identifying gaps and collecting new data.”

Roger Bulgin, another task force co-chair and the chief administrative officer at Woodsworth College, says he expects the task force to make a real difference on campus.

He says he takes encouragement from the example of U of T’s Truth and Reconciliation Steering Committee, which led to the hiring of more Indigenous faculty and staff, the creation of cultural competency workshops and curricular offerings like the master in social work program in Indigenous trauma and resiliency.

“I don’t want a report that will just sit on a shelf and gather dust,” he says. “I want it to lead to actionable recommendations that will help us hold the institution accountable.”

Desma Charlemagne-Michel, task force co-chair and director of human resource services at U of T Scarborough, says the task force’s work is timely given the backdrop of social justice and anti-racism protests across North America and around the world.

“I do think this is staring at us more boldly given everything that’s happening right now,” she says. “We have the opportunity now with great resources and support from the university’s senior leadership.”

Charlemagne-Michel hopes the U of T community will heed the call to participate in the task force, despite the challenging conversations ahead.

“It’s a very vulnerable time for students, faculty and staff, for our allies – for everyone,” she says. “But I do hope from the very start we get great engagement and that we can reassure everyone that the discussions will be well worth it in the end.”

The task force’s deliberations will be kept confidential so all members feel they can express themselves freely.

“We have to start from a place of building trust within the community in order to do this work well,” Charlemagne-Michel says.