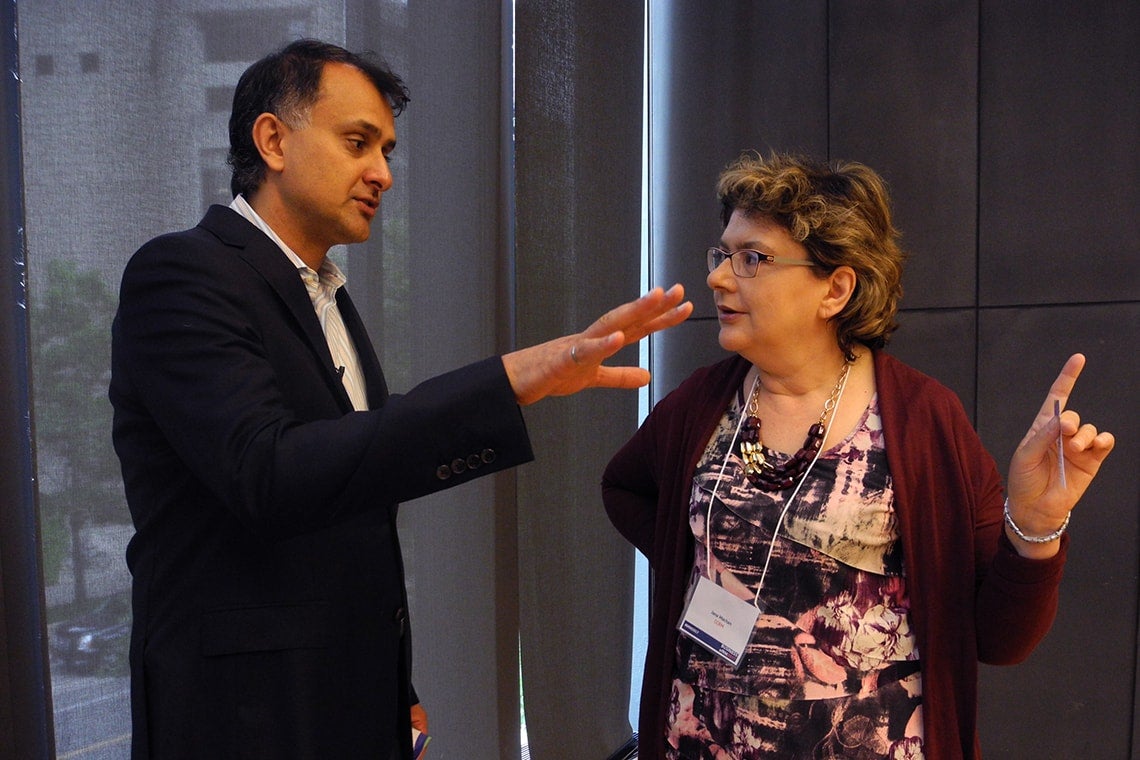 Ajay Agrawal, the founder of U of T's Creative Destruction Lab, chats with Jana Machan, the vice-president of commercialization at the Centre for Commercialization of Regenerative Medicine, at a conference in Toronto (photo by Chris Sorensen)

The Creative Destruction Lab is getting into the business of healing.

Professor Ajay Agrawal, the founder of the rapidly expanding startup program affiliated with the University of Toronto’s Rotman School of Management, said Wednesday that the Creative Destruction Lab (CDL) will roll out “a specialization in biomed tech with a focus on regen[erative] medicine” this fall.

“It’s going to be launched first at CDL West at UBC,” said Agrawal, referring to the lab's first location outside Toronto, launched in 2016 in partnership with the University of British Columbia.

“Then we’ll launch a second one with the same focus at CDL Toronto the following year.”

U of T has deep roots in the field of stem cell research, starting with the discovery of blood stem cells by researchers James Till and Ernest McCulloch in the 1960s.

Half a century later, Toronto boasts a growing biotech cluster with an increasing focus on regenerative medicine. Two years ago, U of T established the Medicine by Design initiative, which brings together researchers from across U of T and nine partner hospitals to focus on transformative research in regenerative medicine and cell therapy. The university also shares a close relationship with CCRM, which was created in 2011 to speed up the process of bringing new stem cell therapies and technologies to market.

Agrawal said that CDL, one of 10 U of T accelerators, will also add New York City to its growing roster of locations in 2018 through a partnership with New York University. Increasingly, its mentors are coming from outside the country, he added.

“This is no longer a Canada-only program,” he said. CDL's latest moves come on the heels of recent agreements to expand the accelerator program from coast to coast through a partnership with business schools in Calgary, Montreal and Halifax.

The idea is to create a broad network of seed-stage accelerators that employ CDL’s unique approach to building and scaling research-based startup companies. That includes subjecting founders to an intensive nine-month program that involves setting and reaching specific, agreed-upon objectives.

If the startups fall short, they’re out.

“For an investor, that’s extremely valuable information because what we’re de-risking is the entrepreneur’s ability to deliver,” Agrawal said, noting that CDL companies have created $1.4 billion in value over the past five years, far eclipsing an original $50-million goal.

But moving into the regenerative medicine space comes with unique challenges. For one thing, clinical trials and regulatory approvals mean it can take years – even a decade or more – to get a product to market. That makes it a tough sell for investors who are accustomed to seeing the sorts of quick returns associated with software startups.

Agrawal, however, said he believed the CDL program’s approach is well-suited to overcome the problem because it chops up the painstaking process of building a life sciences company into a series of achievable stages that allow investors to more easily evaluate a startup's progress.

“We think the method is equally applicable to long-term science projects,” Agrawal said.