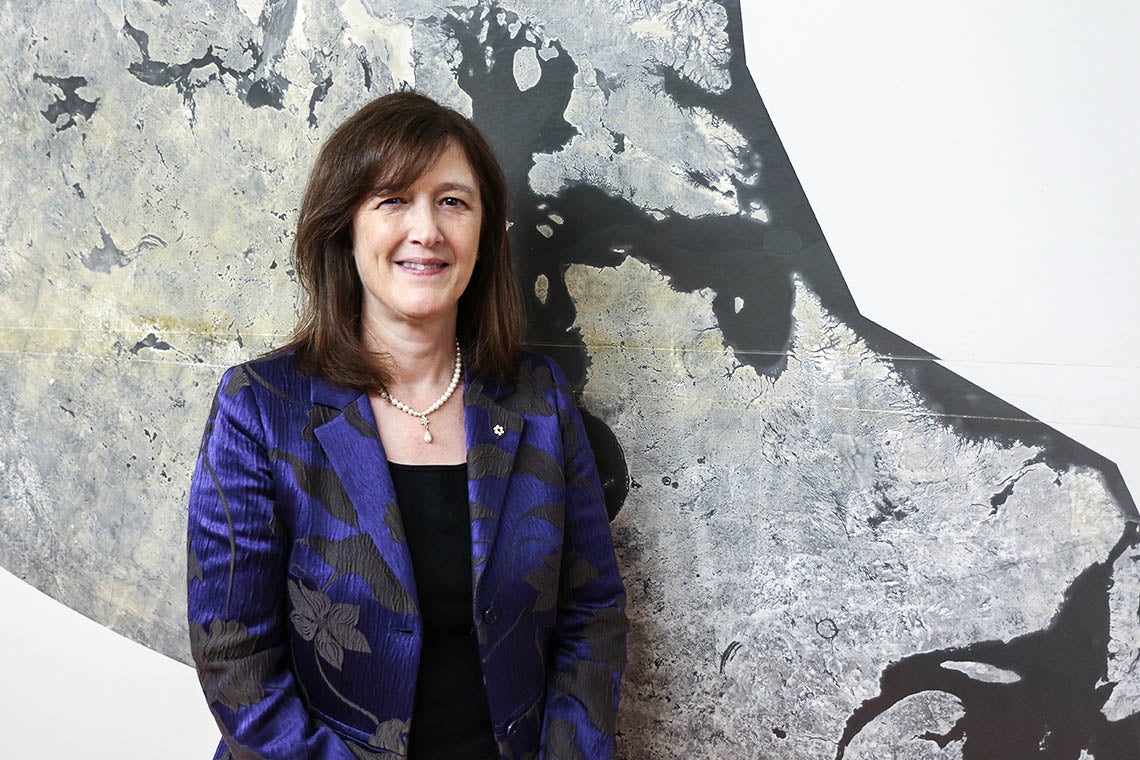 The University of Toronto’s Barbara Sherwood Lollar has received the prestigious Gerhard Herzberg Canada Gold Medal – the country’s top prize for science and engineering research – for her work on water and the life it supports.

The University Professor in the department of Earth sciences was recognized for decades-long research into the geochemistry of deep crustal fluids, drinking water remediation and astrobiology – which seeks to understand the potential nature of life beyond Earth.

Yet, when speaking with someone outside her field, Sherwood Lollar often says, simply, that she “works on water.”

“It makes it easy to tell the story because, at its fundamental level, water is such a touchstone for humans,” she said.

Named after the 1971 Nobel Prize laureate, the gold medal is awarded by the Natural Sciences and Engineering Research Council of Canada, or NSERC, for excellence and influence in research for a body of work conducted in Canada that has advanced the fields of natural sciences or engineering. The Herzberg comes with a grant of up to $1 million, distributed over five years, that can be used to fund university-based research or establish scholarships or research chairs in the winner’s name.

This is the second consecutive year a U of T researcher has been recognized with the Herzberg – University Professor Lewis Kay received the gold medal last year.

“Barbara Sherwood Lollar’s Herzberg gold medal recognizes an impressive body of research that has received global attention and further underscores the university’s status as a research powerhouse,” said Vivek Goel, U of T’s vice-president of research and innovation.

“U of T congratulates her on this latest honour. She is the second woman to win this award, continuing her trail-blazing career in science.”

Sherwood Lollar’s gold medal comes on the heels of a decorated past few weeks. In April, Sherwood Lollar was named a fellow of the Royal Society, the United Kingdom’s national academy of the sciences, while her latest research program – Earth 4D – was included among CIFAR's new 13-program portfolio. She also won the Geochemical Society’s 2019 C.C. Patterson Award, which recognizes an innovative breakthrough of fundamental significance in environmental geochemistry.

To win the Herzberg has been humbling for Sherwood Lollar. “You sit down for a minute and think ‘Really? Wow!’” she said.

The Herzberg, she added, is a recognition of the broad array of research her team is undertaking “from the work we do on contaminant remediation of drinking water all the way over to the work we do about water in the deep subsurface.”

That includes investigating deep energy sources and microbial life far below the Earth’s surface, with the discovery of ancient water from the Kidd Creek Mine in Timmins, Ont. pointing to larger questions about the origin, evolution, distribution and nature of life in the universe.

Sherwood Lollar has also chaired a committee of scientists that produced a NASA-commissioned report recommending a strategic approach to finding life beyond Earth.

“The techniques and the thinking behind [water], the exploration mindset we bring to all of it, is exactly the same. These things are deeply linked,” Sherwood Lollar explained.

Sherwood Lollar has served on several advisory boards that inform scientific policy, including NSERC’s executive council and the U.S. National Academy of Sciences’ space studies board. She is currently director of the Earth, atmosphere and ocean sciences division of the Royal Society of Canada.

She emphasized the importance of collaborating across disciplines, as evidenced by her work on committees and with other faculties, departments and universities – including longtime collaborations with geochemist Chris Ballentine at the University of Oxford and Tullis Onstott at Princeton University.

Sherwood Lollar credits her parents, both history professors, for instilling a sense of curiosity in her as a child. They encouraged her to read a vast range of topics, she said, but “had a bent for exploration stuff,” including fiction from Jules Verne.

“When I look back now, I realize that feeling I get now when I look at data, and see something for the first time, is really akin to that feeling of when I was reading these books – the idea that the world was still unknown and that there were codes to be broken.”