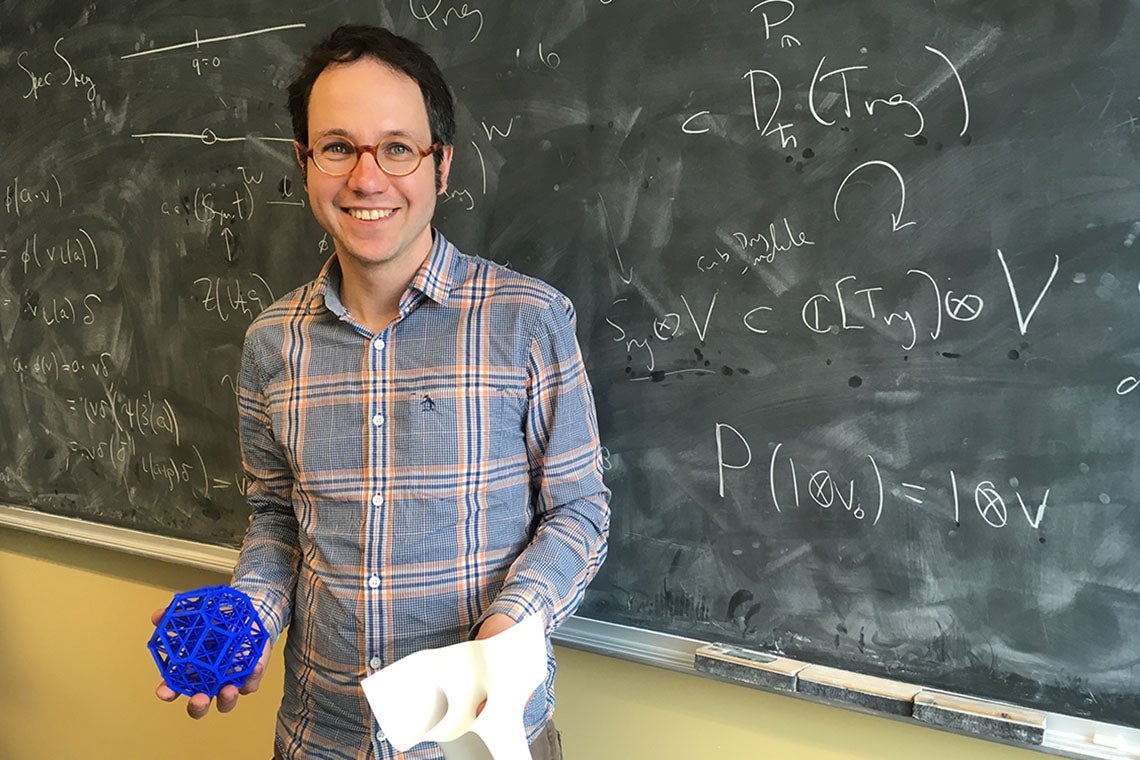 Professor Joel Kamnitzer studies the symmetries and rotations of objects. He holds a blue B3 permutahedron, a model of a 16-dimensional object called a flag variety, and a white object called A4 surface (photo by Jennifer Robinson)

The federal government is honouring two University of Toronto researchers in Ottawa today for their efforts to push the boundaries of human knowledge in the fields of chemistry and mathematics.

Kay, who is appointed to U of T’s departments of chemistry, biochemistry and molecular genetics and is a senior scientist at SickKids hospital, is the first U of T Herzberg winner since 2012 when University Professor Emeritus Stephen Cook was honoured for his work in computer science and mathematics.

“U of T is proud of the achievements of Professors Kay and Kamnitzer in the pursuit of advancing our understanding of how the natural universe operates, from the beginnings of disease to new advancements in mathematics,” said Vivek Goel, U of T’s vice-president of research and innovation.

“We’re also grateful for the continuing support from the Government of Canada for basic, fundamental research that we know leads to transformational practical applications and that ignites curiosity in future generations.”

The Herzberg award, worth up to $1 million over the next five years, is for Kay’s “truly impressive technical breakthroughs” that allow us to “watch the smallest building blocks of life as they move, change and interact with one another over time,” the Natural Sciences and Engineering Research Council of Canada (NSERC) said in a news release.

His methodologies have had impacts for physicists and mathematicians, and his technologies are used in biochemistry and molecular biology labs around the world, setting the stage for breakthrough discoveries, NSERC said.

Read about Lewis Kay in the Globe and Mail

In the world of mathematics, Kamnitzer’s reputation is growing for his work in representation theory.

“It’s nice to get recognition for my work, especially since people outside of mathematics don’t always understand what we do,” he said.

A typical day for him, he said, can involve hanging out at a local coffee shop and writing out complex mathematical equations in a notebook when his blackboard is not handy, writing papers, teaching or Skyping with colleagues around the globe – think Russia and Japan – who are also pondering the symmetries of objects and their rotations.

For example, picture a sphere floating in the air. It can rotate in any direction, at any angle and in any order. The collection of all these possible rotations is a Lie group.

Lie groups also appear as symmetries of elementary particles, such as electrons and protons. The different particles and their many states come in patterns predicted by representations of Lie groups.

Mathematicians like Kamnitzer are involved in the cutting edge of supersymmetric quantum field theories, which predict surprising relationships between different geometric objects related to Lie groups.

His work seeks to understand these predictions and use them to solve important mathematical problems. It also contributes to finding the correct mathematical framework for theoretical physics.

With his Steacie, Kamnitzer will be able to take a two-year sabbatical to deep dive into his research, as well as use $250,000 in grant money to hire students and postdoctoral researchers, and travel to meet with other leading experts in the field.