To find life beyond Earth, 'take off the blinkers,' says U of T’s Barbara Sherwood Lollar 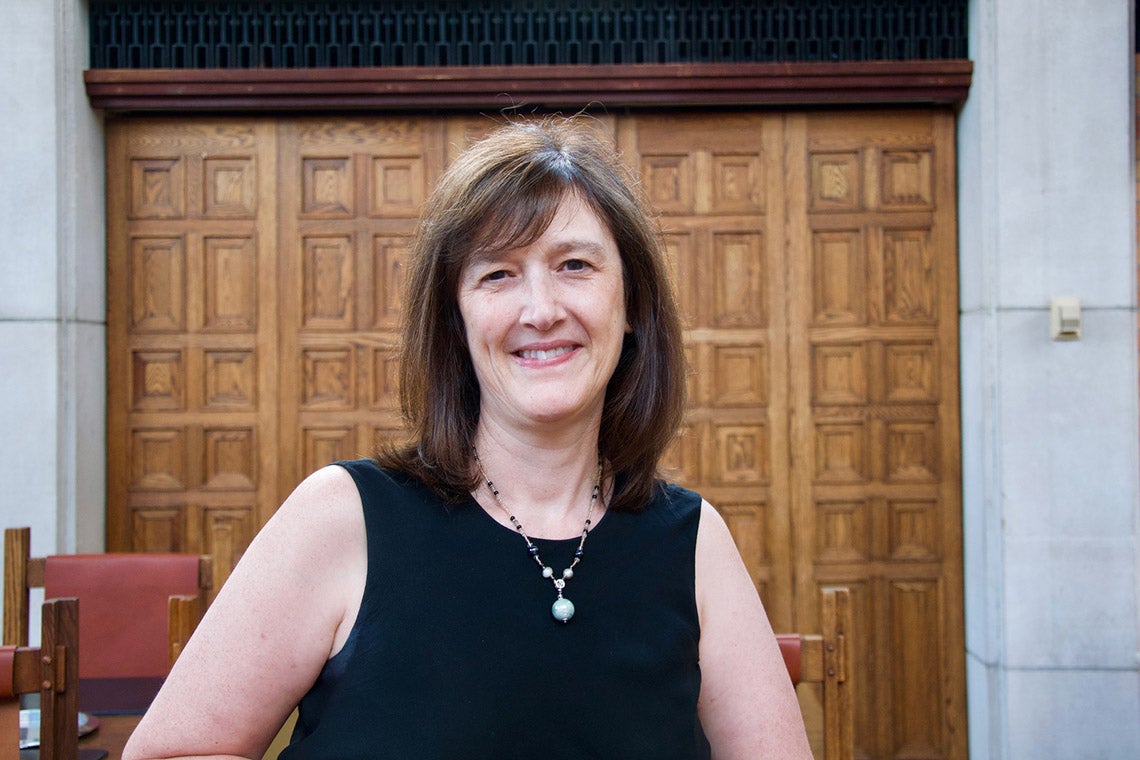 “Sometimes we define what we go looking for by what we already know and, oddly enough, we can actually miss things entirely,” says U of T's Barbara Sherwood Lollar (photo by Diana Tysko)

Is there life beyond Earth?

But to understand the possibilities, we have to do one important thing: Stop thinking that life as we know it – that which depends on oxygen – is the only kind of life.

“If there’s one thing we’ve learned from this planet of ours, it’s that it’s very easy to fall into paradigms and assume that what we know is in fact the limit,” says the University of Toronto's Barbara Sherwood Lollar. “Sometimes we define what we go looking for by what we already know and, oddly enough, we can actually miss things entirely.”

Sherwood Lollar is a University Professor of geology and Canada Research Chair in Isotopes of the Earth and Environment. She was also the chair of the committee that recently published An Astrobiology Science Strategy for the Search for Life in the Universe. It is a year-in-the-making report, commissioned by NASA, to recommend an approach to finding life beyond Earth in a planned, strategic and open-minded manner.

“Our work was to survey the landscape, identify discoveries and recommend areas of new direction,” says Sherwood Lollar. The report is part of a “grassroots process” that leads into the National Academies of Science, Engineering and Medicine’s decadal surveys, where science communities map out what should be focused on over the next decade.

The committee’s overarching approach is to use the fascinating discipline of astrobiology – the study of the origin, evolution, distribution and nature of life in the universe.

“With a definition like that,” says Sherwood Lollar, “astrobiology is immensely interdisciplinary. To search for life beyond Earth, we need to try to understand the life and death of planets and their star systems, such as the influence of the sun on our solar system. And to do that, you need heliophysics, astronomy, astrophysics, biology, microbiology and geology, as well as advanced engineering and technology. And we will need to be able to interpret huge amounts of data, which is where machine learning and artificial intelligence will be essential.”

With all of these possibilities still to explore, Sherwood Lollar and the committee have recommended that the search for life take a variety of forms of life into consideration.

“We need to go broad in thinking about the search for life in the universe. There might be oxygen in a planet’s atmosphere, but that assumes life will be like life on Earth, resulting from photosynthesis. But life can survive through other metabolic strategies.”

She points out that life on Earth has been dependent on oxygen only for the past 2.5 billion of the planet’s 4.5 billion years. Before that, “we had lots of life, but no free oxygen in the atmosphere. And that’s important to realize – planets evolve. At one point, Mars was probably more habitable than Earth. We need to look at that evolution with other planets.”

So the goal in going broad in the search is to “keep the blinkers off and consider the huge variety of lines of evidence that might be important to really nail down the question.”

Another important direction for future research is to explore what is going on beneath the surface of planets. Part of the excitement around the discovery of the ocean deep under the surface of Europa, a moon orbiting Jupiter, is that life underground has been discovered on Earth, too.

“One of the reasons I wanted to be a scientist was the discovery on the ocean floors in the 1970s that life down there was not driven by the sun’s energy,” says Sherwood Lollar. “It was not photosynthetic life, but life dependent on chemicals.

"Hydrothermal vents mixed with ocean waters to produce chemical energy and it was discovered that microbes in those systems can live in the deep parts of this planet off of that chemical energy. And it could then sustain higher order organisms like tubeworms. And it’s since been found that life that lives on chemicals is not just on the ocean floors, but also the continental subsurface.”

And if these forms of life – odd to us, but still life – can happen in Earth’s subsurface, could they happen in the deep parts of other planets?

While the report pushes exploring via an outside-the-box focus, Sherwood Lollar also emphasizes that “the committee is not recommending that space scientists and agencies do everything.” In fact, she says, it is essential to strategize and to plan carefully and to ensure that governments, research institutions and agencies work closely together on how to conduct the search for life.

“It’s a very human report in that sense. It’s about teamwork. It isn’t a solitary, ivory tower kind of exercise. Scientists have to be deeply engaged in their own communities and with the broader public. That’s how we do our best work in any area of research.”

But how important is this search for life elsewhere? Wouldn’t the high expenditures associated with space research be better spent on the problems more directly associated with life on Earth?

“It’s an excellent question and one I ask myself. So I say this: Astrobiology is about the study of life in the universe, which means it is about life on Earth. We need to take a broad view of the scientific enterprise and recognize that the search for life off Earth can have important ramifications for what we do to keep this planet habitable. Life will persist for us. The question is what will the quality of that life be?

“So if you care about this planet, there are aspects of astrobiology that are deeply integrated in the health of Earth. It’s not an either-or proposition. It’s about broad-scale thinking about how planetary systems are linked. And that becomes more vital by the day with climate change on this planet.”