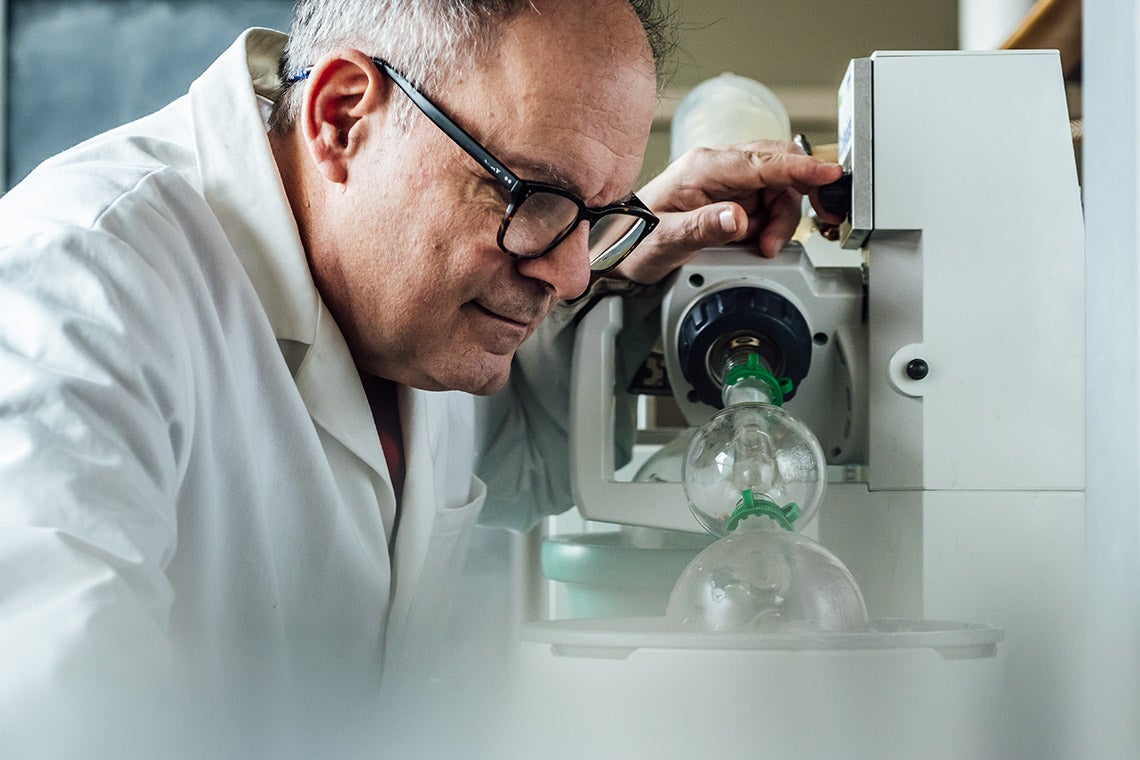 Two faculty members in the University of Toronto's department of chemistry have been awarded national prizes by the Natural Sciences and Engineering Research Council of Canada (NSERC).

University Professor Douglas Stephan, who is internationally recognized for his work in inorganic chemistry, has been awarded the John C. Polanyi Award. Named after U of T University Professor and Nobel Prize laureate John Polanyi, the award honours an individual or team whose Canadian-based research has led to a recent, outstanding advance in the natural sciences or engineering.

In Stephan's case, that advance is his work in frustrated Lewis pairs (FLPs). NSERC, in announcing Stephan’s award, said he “took a 100-year-old chemistry process and redesigned it into something cheaper, more efficient and more environmentally friendly.” The discovery brought him international acclaim and has led to advancements in drug development, chemical production and more environmentally friendly materials science.

Professor Dwight Seferos, the Canada Research Chair in Polymer Nanomaterials, has been awarded an E.W.R. Steacie Memorial Fellowship, one of six for 2019 that recognize the career development of outstanding scientists and engineers who are faculty members of Canadian universities. Seferos is being honoured for his recent advances in synthetic chemistry, specifically the development of power-storing plastics.

The prize is named after Edgar William Richard Steacie, a chemist who made major contributions to the development of science in Canada during, and immediately following, the Second World War.

“Receiving the Polanyi Award and the Steacie Fellowship are signals that one’s research has had impact,” said Vivek Goel, U of T’s vice-president of research and innovation. “U of T is thankful for NSERC’s recognition and support of Douglas Stephan and Dwight Seferos and congratulates them both on their outstanding achievements.

“These two researchers have exhibited leadership that will change their fields, and these honours will strengthen their research and innovation activities going forward,” Goel said

Stephan, who has won a number of national and international honours, told U of T News that winning the Polanyi Award feels different because he has come to know Polanyi as a colleague and admires him greatly.

“It’s kind of weird [to win this award] – he’s in the stratosphere and I’m here on the Earth,” said Stephan, who joined U of T in 2008 from the University of Windsor. Stephan was named a U of T University Professor in 2018.

Stephan’s work in FLP chemistry has been vastly influential, but it is only one of many contributions he’s made throughout his career. In the 1990s, his discovery of a new class of catalysts led to changes in the production of plastic. The finding led NOVA Chemicals to change how it produces plastics – making Stephan one of a very few scientists worldwide to have a discovery rapidly lead to large-scale commercialization.

Stephan said, in his experience, the road from fundamental discovery to real world can take up to 20 years, but Nova’s commercialization of his method took only six.

“NOVA was motivated to acquire the technology and we found the right one,” he said.

“The work was industrially useful but the work we have done [over the last 15 years] has been much more fundamentally innovative.”

Stephan’s findings have helped other chemists create biodegradable plastics, new health care treatments and alternative fuels. Other schools, including MIT and the University of California, Berkeley, have also asked to integrate his findings into their foundational chemistry courses.

“It’s gratifying to know that our research is having this kind of impact. The conceptual basis of FLPs is simple – indeed one that I have easily incorporated into my first-year undergraduate curricula,” said Stephan, who is concurrently an Einstein Visiting Fellow at Technische Universität Berlin.

“I am particularly excited when I see innovations emerge that take the idea of FLPs to new areas of application.”

Stephan says one of the joys of curiosity-driven research is watching the progress of students.

“It’s exciting to see students evolve from undergrads into mature, creative and effective scientists,” said Stephan, who is also the Canada Research Chair in Inorganic Materials and Catalysis.

He is excited to put the award money to use to build on the work he has established with his research team. “Being able to use the tools we have, our collective knowledge of chemistry, to try to do things that people haven’t done before – that’s motivating,” he added.

“It was exciting when I was an undergraduate, and it’s exciting today.” “We take a very molecular view of batteries and think about how we can design systems that will make it better and safer for the user, and make it adoptable for everyone,” says Dwight Seferos (photo by Martin Lipman/NSERC)

A faculty member at U of T for about ten years, Seferos said he is pleased to be named a Steacie Fellow because it will give him time to think about the next decade.

“It’s a phenomenal award,” he said. “It allows you to have two-year teaching relief, which is unheard of in our profession, so you can really take risks and do new things, design new projects and think about what you want to do.”

And what we wants to do begins with batteries.

The McLean Award-winning researcher and his team have been at the forefront of using modified natural compounds like a vitamin found in leaves to make high-tech items like batteries for transportation and even eco-friendly clothing.

His fellowship winnings will help the Seferos research team explore automation and artificial intelligence in data collection and analysis. The NSERC grant will also support Seferos’s work with Pliant Power Devices, a startup he co-founded with his former student Tyler Schon.

“We’ll definitely try to pursue battery ideas in a more pragmatic way,” said Seferos. Over the next few years, he plans to get involved in more projects with the National Research Council, which has advanced manufacturing facilities in Ottawa and Mississauga. “They have the resources and PhD-level scientists who can work with our students.”

Speaking from his lab office, the Seattle native has always wanted to work beyond the boundaries of traditional chemistry.

“We’re a chemistry group, we’re not an electronic engineering group,” said Seferos. “We take a very molecular view of batteries and think about how we can design systems that will make it better and safer for the user, and make it adoptable for everyone.”

For Seferos, lines between science, engineering and the social sciences are blurring and researchers recognize that problems could be better solved with collaboration. “We all have the same human issues that we’re trying to solve,” said Seferos.

He loves the thrill of coming to the lab and working with different researchers on these issues. “If you can make these connections between different things and put them together that’s really where the value is,” he said.