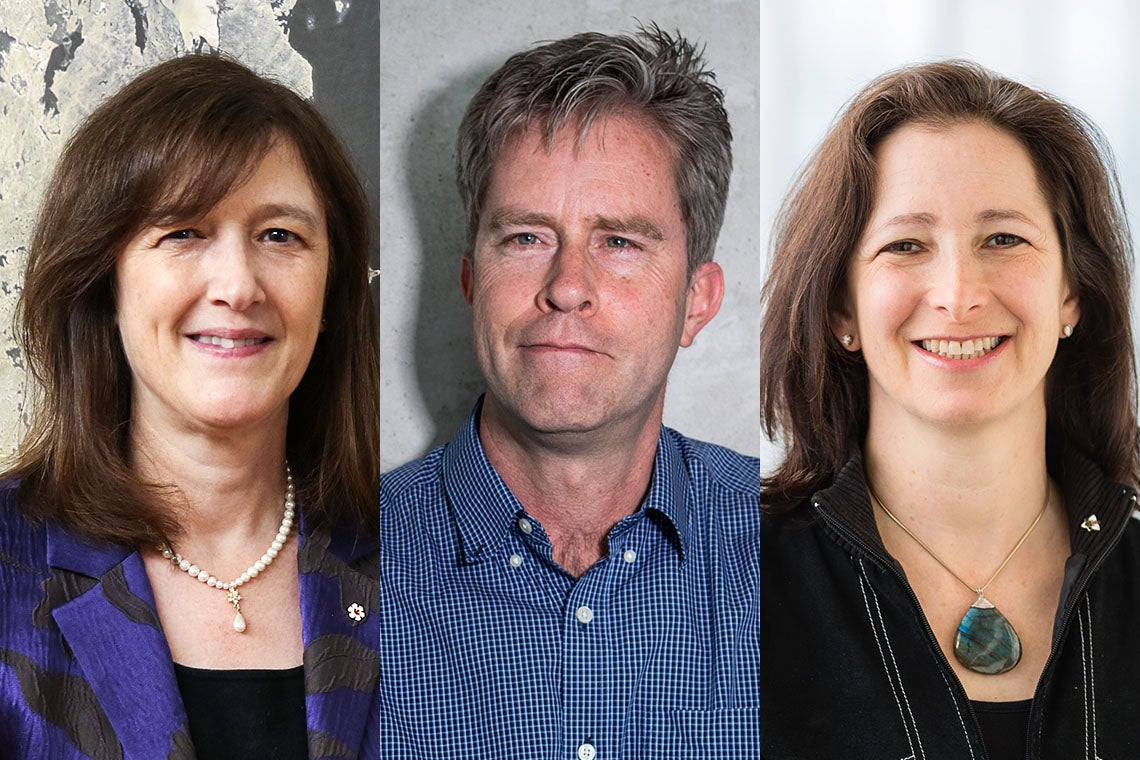 Three prominent University of Toronto researchers are among 50 scientists who have been named fellows of the Royal Society, the United Kingdom’s national academy of sciences.

Admitting up to 52 fellows and 10 foreign members out of about 700 candidates each year, the fellowship recognizes scientists who have made substantial contributions to their fields.

University Professors Sherwood Lollar and Shoichet are two of 13 women scientists admitted this year. All three U of T researchers are also fellows of the Royal Society of Canada.

“The fact that the Royal Society recognized outstanding researchers in three separate disciplines demonstrates the range of talent, creativity and leadership that U of T fosters and grows,” said Vivek Goel, U of T’s vice-president of research and innovation. “Election to the Royal Society is an important international recognition of their exceptional work. U of T congratulates them on this incredible achievement.”

New fellows are considered and selected by Royal Society members from any sector of the scientific community. For Sherwood Lollar, whose work ranges from geology and geochemistry to Earth sciences and, most recently, astrobiology, being recognized by her peers is “the ultimate big picture.”

“It’s an acknowledgement that I find utterly humbling,” said Sherwood Lollar of U of T’s department of Earth sciences in Faculty of Arts & Science.  “When I received that letter, I read it, I read it again, and I read a third time to make sure I understood.

“My colleague said it’s sort of the equivalent of getting the letter from Hogwarts,” she added, with laughter.

Sherwood Lollar is known for discoveries on the habitability of deep Earth fracture waters – which are driving insights into deep space mission planning – and has transformed how we understand the age and extent of Earth's groundwater through the discovery of billion-year-old waters.

She was also the chair of a committee of scientists who recently published An Astrobiology Science Strategy for the Search for Life in the Universe, a report commissioned by NASA that recommends an approach to finding life beyond Earth.

Blencowe, a professor in the Donnelly Centre for Cellular and Biomolecular Research and the department of molecular genetics, is a pioneer in the development and application of high-throughput RNA profiling technologies. He recently led the discovery of a gene regulatory network linked to autism – work that could lead to new therapies.

Speaking about the Royal Society appointment prior to the announcement, Blencowe praised past and present departmental chairs for giving him the opportunity to do his research and for fostering a “collaborative spirit” with researchers of varying backgrounds.

“A wonderful thing about Toronto is this collaborative environment where researchers work really well together and come up with amazing discoveries,” said Blencowe, a winner of the Natural Sciences and Engineering Research Council of Canada’s Polanyi Award in 2011.

“It’s a tremendous honour that could not have happened without the contributions of a remarkably talented team of researchers that I have the pleasure of working with every day.”

Shoichet, a world-leading expert on regenerative medicine and tissue engineering, is Ontario's former chief scientist and has published more than 500 papers, patents and abstracts, and given more than 350 lectures worldwide in regenerative medicine, tissue engineering and drug delivery. Her latest projects include AmacaThera, a U of T-based health startup that is developing alternatives to post-surgical painkillers – a key source of the current opioid crisis.

Shoichet is honoured to join this list of scholars “whose work has shaped and changed our understanding of our world, and what is possible.”

“I am thrilled to be named among more than 180 women engineers, scientists and researchers who blazed this trail before me,” said Shoichet, who holds appointments in the department of chemical engineering and applied chemistry, the Institute of Biomaterials and Biomedical Engineering and the Donnelly Centre.

Shoichet, an Officer of the Order of Canada, is the only person to be elected a fellow of all three of Canada’s national academies and is a foreign member of the U.S. National Academy of Engineering.

“It’s wonderful to be sharing this recognition with two other brilliant scientists at the University of Toronto, Barbara Sherwood Lollar and Benjamin Blencowe,” she added.

The new fellows will be formally admitted to the society at their Admissions Day ceremony in July.

With files from Carolyn Farrell