U of T researchers awarded Killam Prizes for contributions to humanities, health sciences 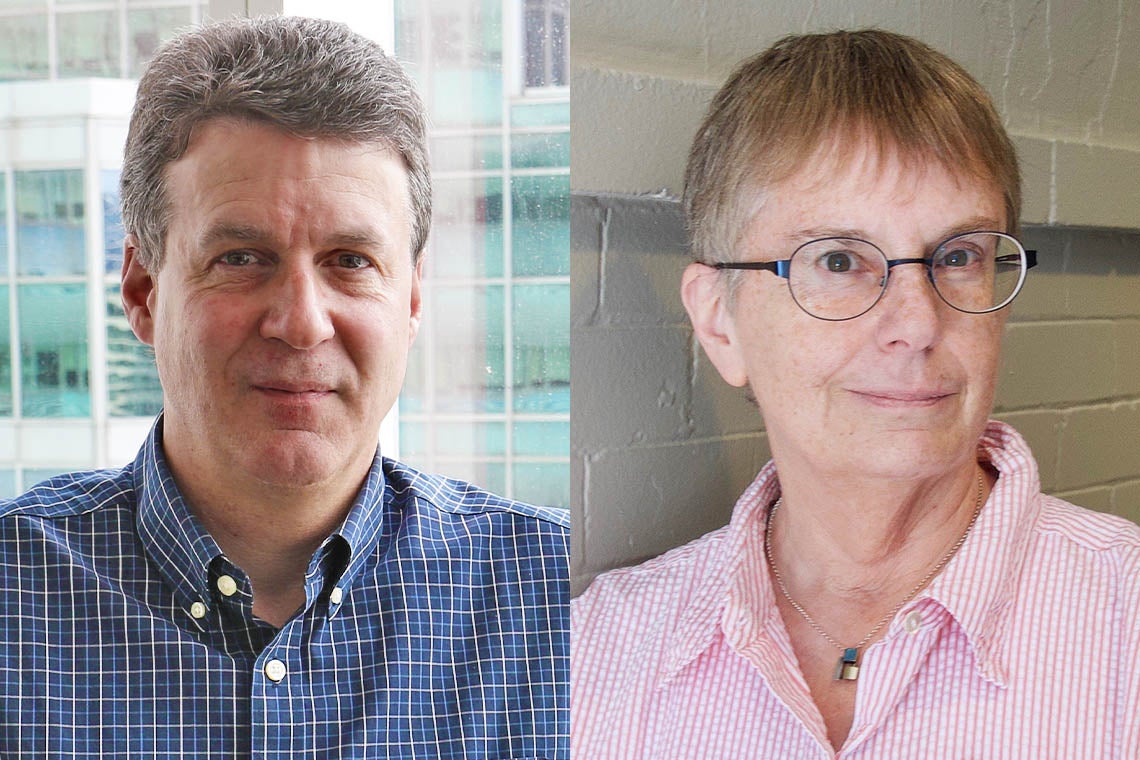 She has revealed knowledge about Stalinist Russia that was previously kept hidden. He has mapped our genes and given us a better understanding of autism.

Historian Lynne Viola and geneticist Stephen Scherer have not only made profound discoveries – their research has changed the entire landscape of their respective fields. The Canada Council for the Arts, the country’s public arts funder, is recognizing their lifetime contributions with Killam Prizes, the organization’s top annual award.

“The scholarship of Professors Viola and Scherer are changing our understandings of their fields, leading to a healthier and safer world,” said Vivek Goel, U of T’s vice-president of research and innovation.

“The University of Toronto congratulates them for this significant award, recognizing their outstanding careers.”

The council awards $100,000 Killam Prizes in five categories each year, including engineering, natural sciences and social sciences. The Killam Trust, which administers the award, also names researchers to a two-year Killam Fellowship that supports outstanding scholars on groundbreaking projects.

Since 2010, U of T faculty have won 13 Killam Prizes, accounting for more than a quarter of those awarded to Canadian researchers. In the past five years, U of T has had winners in all five Killam Prize categories – including double wins in each of engineering, health sciences and humanities.

“U of T’s researchers and their findings are resonating widely, inside and outside of the classroom,” Goel said.

Viola and Scherer, both University Professors and fellows of the Royal Society of Canada, join a group of about 7,000 Killam laureates. Lynne Viola sees Stalinist Russia, and its oppressive violence, “as a cube.”

Viola, a professor in the department of history, organized her extensive study of the period from a variety of different perspectives, or sides – each one helping to inform our overall understanding of the brutal regime.

“I wanted to look at violence from different angles to get a sense of the spectrum of responses and policy on terror through the '30s, and turning it around in different ways,” said Viola, who has published four definitive books on the topic.

Viola's first book, 1987's The Best Sons of the Fatherland, focused on the supporters of Stalin’s regime. Her second book, 1996's Peasant Rebels Under Stalin, looked at state government resisters. Her third book, The Unknown Gulag, published in 2007, looked at Stalin’s victims and their fates. Finally, her most recent work – 2017’s Stalinist Perpetrators on Trial – looked at those who implemented Stalin’s Great Terror, a campaign of political repression from 1936 to 1938.

Rich in detail and filled with primary sources, including from the KGB archives, Viola's research seeks to contextualize a period the Soviet government sought to hide from the public. She called the work “painstaking.”

“My last three books have been about using the voices of these people,” said Viola, who won the Molson Prize in 2018.  “I tried to use their voices to tell the story, particularly in terms of that second book, Peasant Rebels.

“I wanted these peasants to have a say. I wanted them to present their side of the story.”

Since her days as a graduate student, Viola has worked to create a richer, more nuanced understanding of Soviet history – and push it in a more scholarly direction. When the Soviet archives became available in the 1990s, Viola was among the first researchers to seize the moment.

Viola’s most recent book about Stalinist perpetrators was based on Ukraine’s former KGB archives, which became available following a 2014 revolution that saw the country’s incumbent president ousted. Viola sees the work as completing the full circle of perspectives from that period.

“I certainly feel like we have a really good sense of the early 1930s and a better sense of the late 1930s,” she said.

She added that she views the archives as a “kind of a back door into the Great Terror, so that we can literally accompany these perpetrators into the execution room, the interrogation room and find out the mechanisms of how the Great Terror worked.”

Viola hopes her scholarship has opened the door for others – especially in the Kiev archives, where researchers will likely be sifting through documents for years to come.

“It’s really a great recognition of the humanities,” she said of winning the Killam Prize. “It was an absolute honour.” Stephen Scherer will never forget what a fourth-year professor told him when he was applying to graduate school.

“Word for word, he said, ‘You’re terrible, you’re a loser. You’ll never do anything with your life,’” he recalled. A native of Windsor, Ont., Scherer wondered if the professor was trying to motivate him or was simply being a jerk.

Whatever the message, Scherer, now in U of T's department of molecular genetics, has gone on to become one of the top genetic researchers in the world. He is the co-founder and director of the Centre for Applied Genomics at the Hospital for Sick Children and the director of U of T’s McLaughlin Centre, which seeks to advance genomic medicine through research and education. In 2004, he founded the Database of Genomic Variants, the world’s most-used database for gene copy number variation (CNV) – repeated or deleted copies of entire genes that vary by individual – that helps facilitate thousands of clinical diagnoses around the world every day.

In the early 2000s, Scherer’s team identified the CNV of specific genes involved in brain development that contribute to autism.

Scherer’s initial breakthrough came while mapping chromosome 7 – the location of the cystic fibrosis gene – as a PhD student in the 1990s as part of the Human Genome Project. His findings, published in 2003, contributed to groundbreaking insights in the field of genetics.

“It gave me the ability to look at the genome in a way others hadn’t been able to do before,” said Scherer, whose work has been documented by 500 scientific papers and cited more than 50,000 times.

Scherer equated the discovery of CNV to recent news that researchers photographed a black hole for the first time – namely that he and his team were peering into the unknown.

“These things called copy number variations were basically parts of the genome hidden from us,” he said.

Yet, for years, his findings were met with resistance.

“It was about convincing the scientific community that something so prevalent was actually there,” Scherer said. “As you can imagine, there were a lot of scientists who were working in the same field who should have also made the discovery, or who had the data but didn’t make the connection.”

Scherer’s 2004 report made waves and set the tone for an American Society of Human Genetics conference the same year in Toronto.  Scherer recalled one conversation with a student that still stands out: “He said, ’I memorized every piece of data in that table in your paper. It was so critical for the interpretation of my experiments.’”

Scherer sees the Killam Prize as a way to rally resources around the discovery and expand its application. “We applied it in autism but we’ve seen it in every single disease,” he said.

Ideally, he hopes to be in attendance one day when one of his students wins a prize like the Killam.

“My strategy is to plant a thousand seeds,” he said.  “We have a million things going on here all the time – and my job is to watch, listen and learn.”