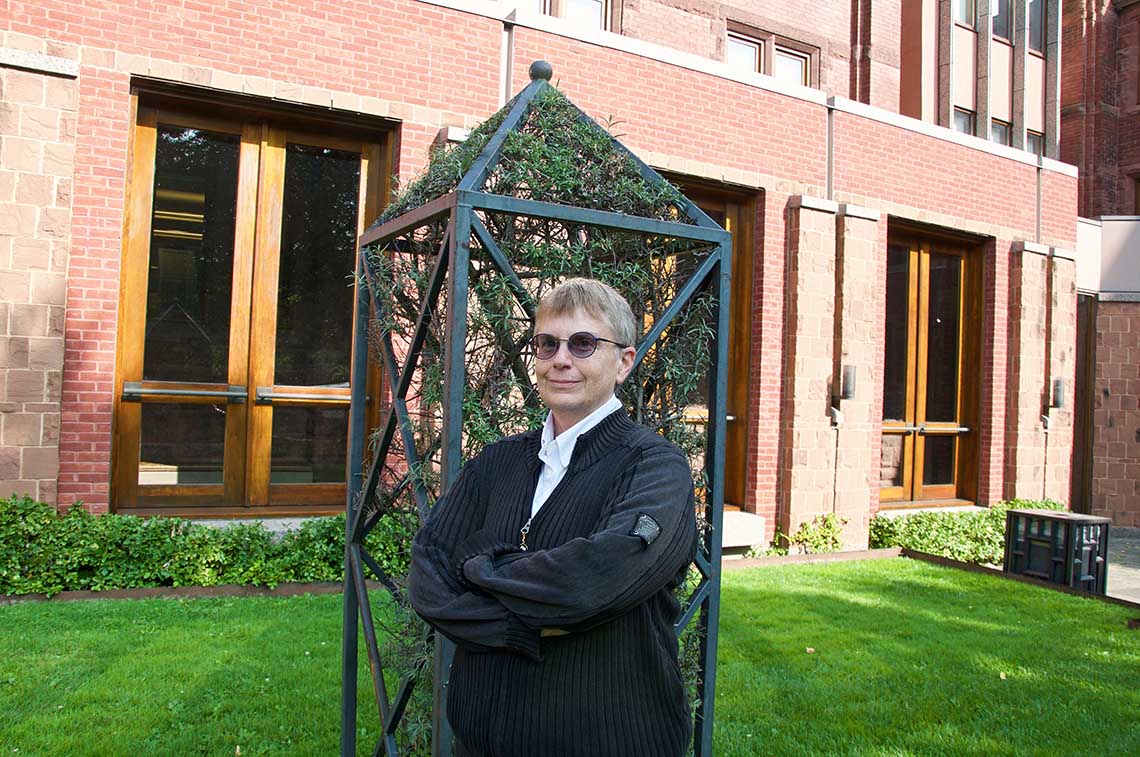 A new book is shedding a stark light on one of the darkest periods in the history of the former Soviet Union, after a University of Toronto researcher uncovered a treasure trove of previously secret documents.

The chilling story behind Stalinist Perpetrators on Trial: Scenes from the Great Terror in Soviet Ukraine, by University Professor Lynne Viola of the department of history in the Faculty of Arts & Science, includes grim details of torture, sexual sadism and executions in Ukraine during the Great Terror of the late 1930s, when Soviet dictator Josef Stalin turned the table on members of the secret police and put them on trial for crimes he had actually sanctioned.

It is the first work in English to be based on case files of interrogations and trials of the secret police who carried out state violence.

While a great deal is known about the experience of victims of the Great Terror, we know almost nothing about the low- and mid-level Narodnyi Komissariat Vnutrennikh Del (NKVD), or secret police, who carried out Stalin's murderous policies. Unlike the postwar public trials of Nazi war criminals, NKVD operatives were tried secretly, and what happened at  those trials remained secret until now.

“What I do in this book is use these files to create a series of micro-histories on the Great Terror, in environments that have never been studied,” says Viola, the first Western historian to write about the trials based on an archival study of documents in Ukraine.

“The trials are the richest of the materials because of the picture of the Great Terror that we get. We can actually go into the torture chambers and the execution rooms and see how things happened.”

Much like U.S. soldiers at Abu Ghraib in Iraq and at Cuba’s Guantanamo Bay, the perpetrators of sexual sadism and other horrors inflicted on captives were dismissed as a few bad apples. They were in fact part of a systemic pattern of violence and torture sanctioned by the state. A master of scapegoating others to cover his own misdeeds, Stalin called a halt to the Great Terror by blaming investigators, interrogators and other officials of the NKVD who had faithfully carried out his murderous policies.

“They all thought it was terribly unfair, because they all said, like many perpetrators in many places do, that they were only following orders,” says Viola.

“And they were. But they were given enough agency that they did so extremely creatively, so it’s not like I want to let them off the hook. I don’t subscribe to the ‘ordinary men’ argument.”

By blaming them for carrying out his orders, Stalin was not only was able to rein in the NKVD, but wash his hands of the Great Terror, which had capped one of the bloodiest decades of state-backed repression in Soviet history.

From 1930 to 1939, close to 725,000 people were executed and millions more were interned in prisons and labour camps or exiled to the most remote parts of the Soviet Union.

The sheer scale of the Great Terror period of the repression in 1937 and 1938 meant that everyday people – from firemen to postal workers – had to be recruited to help with interrogations. Often, they would steal the victims’ clothing and other possessions, arguing it was their fair compensation for doing the dirty work.

“What my book shows is that the Terror leaked out to the public, even though these things were being done in secret. Wives would see their husbands’ clothing for sale in the market, or people would hear the shootings, or hear the secret police drunkenly boasting,” says Viola.

“There were all sorts of ways people got wind of this. So it was more public than we have generally understood, and that suggests not only knowledge, but more participation than we thought.”

The graphic picture Viola paints of the torture and trials of the NKVD operatives is thanks to a recent wave of openness in Ukraine that allowed her to access thousands of previously secret documents in the archives of the former Soviet state.

Russia’s secret police documents on the Great Terror are still a closely guarded secret. This year marks the 100th anniversary of the Russian Revolution, and President Vladimir Putin is busy re-framing Stalin as a man who helped move the country forward.

“Putin is not going to offer up these documents up freely. He sees it as insulting to their heritage, even though there are lots of intellectuals in Russia who are happy we have this stuff.”

Stalinist Perpetrators on Trial: Scenes from the Great Terror in Soviet Ukraine is published by Oxford University Press.