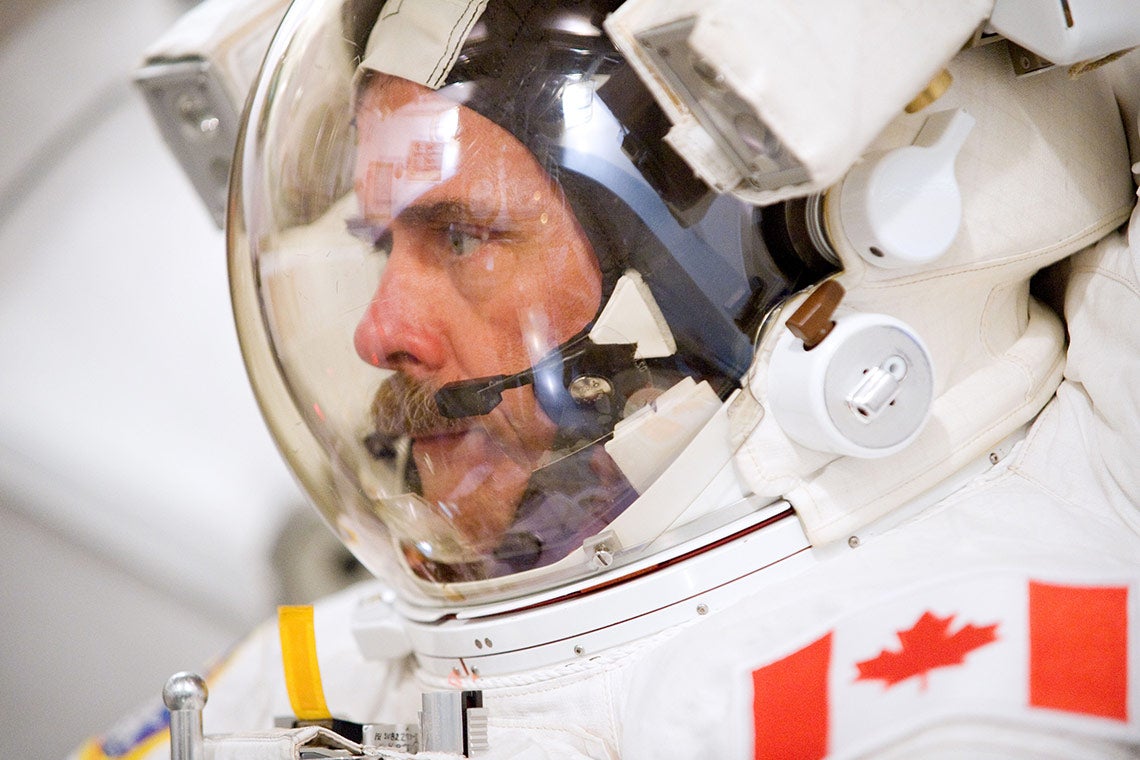 Chris Hadfield, Expedition 34 flight engineer and Expedition 35 commander, participates in a spacesuit fit check at the Johnson Space Center in 2012 (photo by NASA/Mark Sowa via Flickr)

The Creative Destruction Lab has helped build dozens of futuristic companies over the years – now it’s seeking entrepreneurs whose ideas are literally out of this world.

Working closely with former Canadian astronaut Chris Hadfield, the seed-stage accelerator affiliated with the University of Toronto’s Rotman School of Management is launching a dedicated stream for space startups working on everything from interplanetary transportation to asteroid mining.

The new stream seeks to attract space-focused entrepreneurs from around the world while providing entrepreneurial minded Canadian researchers at places like the University of Toronto Institute for Aerospace Studies, or UTIAS, with another way to get their innovative ideas off the ground.

“We see a next-generation of space entrepreneurship on the rise,” says Sheret Ross, a Rotman MBA alumnus who is leading the new CDL stream. “Yet, despite amazing talent in Canada, relatively few of those companies are being created here – we want to change that.”

With a goal of launching 60 successful space startups over the next five years, Ross says CDL plans to build a network of corporate partners, space agencies, astronauts, investors and seasoned entrepreneurs who can support these “really amazing PhD or master’s level students who want to commercialize their research” in the space realm.

A key ingredient will be the stream’s fellows – starting with Hadfield, one of Canada’s most accomplished astronauts and a founding fellow. The Sarnia, Ont., native has served in a variety of roles at NASA including as commander of the International Space Station, making him the first Canadian to command a spaceship. He will be joined at CDL by Anousheh Ansari, the co-founder of the Ansari X-Prize and the first self-funded woman to fly in space, and Christine Tovee, the former CTO of Airbus Group North America.

“We are at the frontier of a new space economy,” Hadfield said in a statement. “Now is the time to place a bet on the next generation of space entrepreneurs.” Anousheh Ansari, the first self-funded woman to fly in space, is one of the program's fellows. She is pictured here inside the Soyuz TMA-9 spacecraft in September 2006 (photo by NASA via Flickr)

CDL’s space stream is the latest to be added to its rapidly expanding portfolio. The accelerator, one of nine at U of T, already boasts a dedicated stream for artificial intelligence companies and last year launched a stream focused on the nascent field of quantum machine learning. At the same time, the CDL model – which sees seasoned entrepreneurs and investors work with startups to set and meet goals – is experiencing significant growth after signing partnership deals with other Canadian business schools and New York University’s Stern School of Business.

CDL’s foray into the stars comes at a time when ventures like Elon Musk’s SpaceX are generating excitement about the private sector's future role in space. Nearly US$1 billion was raised by space companies during the first three months of this year in areas that spanned launch technologies, satellites and “in-space industrials,” according to a recent report by American venture fund Space Angels.

There are already a few U of T researchers who have dared to go where few entrepreneurs have gone before. Earlier this year, Kepler Communications successfully deployed its first nanosatellite aboard a Chinese rocket. The CDL startup, co-founded by U of T alumni Mina Mitry and Jeffrey Osborne, seeks to build out a constellation of low cost satellites to provide data communications links between connected devices on Earth and, eventually, in space. Sheret Ross, a graduate of Rotman's MBA program, is heading up the space stream at the Creative Destruction Lab (photo by Chris Sorensen)

So what kind of space startups is CDL hoping to produce? Ross lists a variety of areas that have significant potential including: space mining, interplanetary transportation, space robotics, habitat construction, launching and propulsion technologies and the design of new radiation-resistant materials.

While CDL anticipates its entrepreneurs will tackle a myriad of big, hard-to-solve problems associated with space, Ross noted there are also near-term opportunities to apply space-oriented technologies closer to home. One example might be a space mining startup that uses satellite data to pinpoint new mineral deposits back here on Earth.

“People get lost in the magic of space,” Ross says. “But there are applications you can build a business around today.”

While applications for the nine-month program close on Aug. 10, Ross says CDL has already reached out to researchers and entrepreneurs around the globe to gauge interest and has received an enthusiastic response. “Having access to someone like Chris or Anousheh Ansari is so valuable to these companies,” Ross says.

“They won’t get that anywhere else.”