A quantum leap? Inside a U of T accelerator's bold bet on the future of artificial intelligence 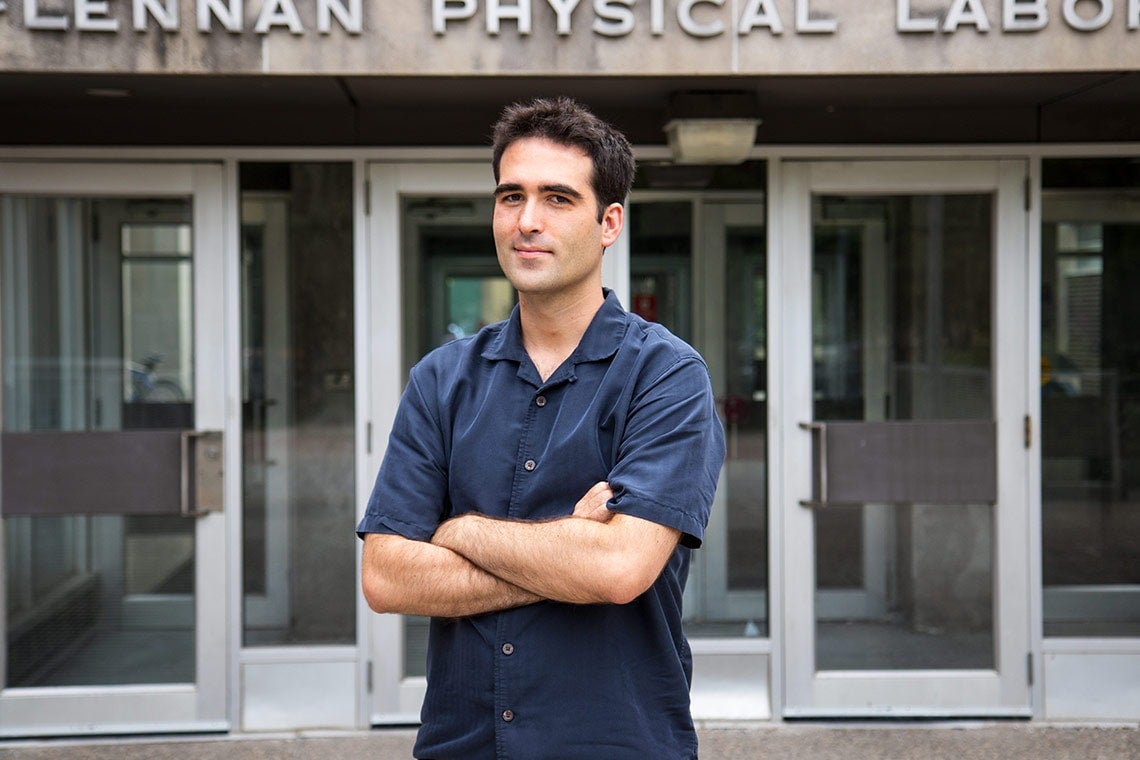 Robert Schaffer, a condensed matter physicist with a PhD from U of T, is one of about 40 entrepreneurs admitted to the Creative Destruction Lab's new quantum machine learning program (photo by Chris Sorensen)

Launching a startup is difficult enough – never mind one that requires a yet-to-be realized technology to succeed.

That’s the daunting challenge faced by Robert Schaffer, a condensed matter physicist with a PhD from the University of Toronto. He is one of about 40 aspiring entrepreneurs taking part in a bold, new quantum machine learning program developed by the Creative Destruction Lab (CDL), a seed-stage accelerator located at U of T’s Rotman School of Management.

The program is touted as the first-ever attempt by a business accelerator to marry the booming field of machine learning with the nascent technology of quantum computing, which involves using tiny, atom-sized particles to perform ultra-complex calculations.

If it works, Schaffer reasons he and his colleagues will help launch a new industry with the potential to super-charge all manner of existing artificial intelligence, or AI, applications – tackling everything from drug discovery to self-driving cars – while opening the door to countless others.

But make no mistake, success is far from guaranteed.

“There’s a chance the technology isn’t there yet and won’t be in time for us,” Schaffer says, referring to the race by IBM, Google and others to build the first general purpose quantum computer.

“But it’s also possible the technology will be there and we’ll be on the cutting edge, or we’ll find ways to make the technology that is there work and grow into something fantastic for the university, the city and for Canada.

“We’re trying to get in on the ground floor.”

First revealed back in May, CDL’s novel quantum machine learning stream quickly attracted applicants from as far away as Russia and Pakistan. The inaugural cohort, which is operating out of U of T’s new ONRamp co-working space, are being given access, via the cloud, to the world’s only commercially available quantum computers, built by Vancouver’s D-Wave systems.

D-Wave’s shed-sized, $15-million machines have cores cooled to a temperature colder than deep space – necessary to manipulate individual quantum particles – and have been sold to the likes of Google, NASA and Lockheed Martin.

The entrepreneurs also have access to a quantum system made by Rigetti Computing, a Silicon Valley-based quantum hardware startup, as well as seed financing, should they choose to accept it, provided by a trio of U.S. venture capital investors – Bloomberg Beta, Data Collective and Spectrum 28. It’s yet another example of how U of T, which boasts numerous startup hubs, is emerging as a hotbed for entrepreneurs who are seeking to transform the latest cutting-edge research in AI and other fields into potentially game-changing companies.

“To my knowledge, Toronto is now home to the largest concentration of quantum machine learning startups,” says Daniel Mulet, associate director of CDL who is running the program, adding that interest from entrepreneurs, investors and technology partners far exceeded expectations.

Sylvester Kaczmarek is among those who relocated to Toronto to participate in the program.

“Machine learning accelerators are everywhere,” he says, adding he spent six years in Silicon Valley, where he launched two startups, including a mobile game studio with a global footprint.

“I mentored at Techstars, Google and all of these places. I’ve mentored more than 250 startups in my life – in Asia, in the U.S., Europe, Africa and Latin America. But I’ve never seen anything like a quantum machine learning accelerator program – this is very unique.” So what exactly makes quantum computing different from regular, or “classical,” computers? Instead of performing calculations using a binary system of zeros and ones, which correspond to the on-off flow of electricity through circuits, quantum computers capitalize on such mind-bending quantum concepts as superposition, which permits quantum bits, or qubits, to exist in multiple states or “realities” – on and off – at the same time.

At a recent tech conference, Microsoft CEO Satya Nadella used the analogy of a corn field maze to explain the difficult-to-grasp concept, which was first theorized back in the 1960s. A regular computer, Nadella said, would explore each path, retracing its steps each time it bumped into a dead end. A quantum computer? “It could take every path simultaneously," he said. "That’s the power of quantum.”

For certain types of problems, this parallelism theoretically translates into an exponential increase in computing power as ever more qubits are strung together. One oft-cited example: A 300 qubit machine could store more numbers simultaneously than all the atoms in the universe.

Not surprisingly, such number-crunching capacity could potentially have myriad applications. It could, for example, help pharmaceutical companies sift through billions of molecules in search of new, life-saving drug candidates. Or it could help scientists develop better models of complex systems like the Earth’s climate. Or it could simply be used to solve the rather mundane-sounding, but mathematically complex task of figuring out the optimal route for a delivery truck to take through a dense urban core.

In fact, Wall Street investment bank Morgan Stanley said in a recent research report that quantum computing could have “far-reaching” consequences for many sectors of the economy, including  finance, pharma, oil and gas, utilities, chemicals, aerospace, capital goods, artificial intelligence and big data.

“When I was applying to the program, the idea I suggested had applications for academia, but also for pharmaceuticals and device manufacturing – things like battery creation and that kind of stuff,” Schaffer says.

But there’s a caveat. Despite recent strides, true quantum computers remain more research project than commercial product – largely because of the challenges associated with coaxing long strings of qubits to remain in their quantum states. Simply trying to observe them, let alone manipulate them, can be enough to thwart their quantum properties.

At present, a state-of-the-art quantum computer – employing technology like vacuum-trapped ions or superconducting circuits chilled to near absolute zero, the temperature at which atoms cease to move – consists of about 15 qubits. That’s enough to perform a few simple calculations, but a far cry from the 70-odd qubits needed to rival the processing power of a classical machine.

Google, for one, has promised to demonstrate “quantum supremacy” by the end of this year. But many experts believe it will be at least five to 10 years before anything approaching a useful quantum computer – meaning one designed to handle a variety of problems, as opposed to one that merely solves an equation specially written for it – is a reality.

“The problem when it comes to a universal quantum computer that can handle anything is the technologies we’re using aren’t scalable,” says Amr Helmy, a professor of photonics in U o f T’s Faculty of Applied Science & Engineering.

“It’s not just the generation of the qubits that needs to be taken into account – it’s the interconnectivity, the amount of control we have over them, and the quality of the qubits over distance and time.” Despite the hurdles, Rotman Professor and CDL founder Ajay Agrawal several years ago sensed an opportunity to get ahead of the game by capitalizing on research done at places like Perimeter Institute for Theoretical Physics and Institute for Quantum Computing in Waterloo, as well as early quantum technology companies like D-Wave. (D-Wave, it should be noted, builds what’s known as a quantum annealer – a machine that side-steps many of the problems associated with building a general purpose, or “universal” quantum computer,” but is limited to solving certain types of optimization problems.)

Agrawal reached out to Peter Wittek in the quantum information theory group at the Institute of Photonic Sciences in Barcelona. Wittek, who had just authored a 2014 book called Quantum Machine Learning: What Quantum Computing Means to Data Mining, told Agrawal D-Wave’s machine could run a type of neural network called a Boltzmann Machine, which is core to several machine learning applications.

Fast forward two years and Wittek has just spent a month in Toronto training CDL’s quantum cohort. Calling quantum computing “complementary” to existing machine learning technologies, Wittek says the startups are expected to develop businesses straddling both the classical and quantum computing worlds, taking advantage of each platform where it makes the most sense.

One example of a problem where quantum systems promise to yield a significant benefit is probabilistic sampling. Wittek notes one of the drawbacks of deep learning neural networks, which mimic the human brain, is they tend to function as black boxes.

“It may classify an image as a dog, but you never know why,” Wittek says. “But with these probabilistic methods, you would have a construction that would tell you exactly why it arrived at a certain conclusion, which is very important in many applications like finance, medicine and engineering.

“It sort of extends the scope of machine learning to applications that shied away from its use until now.” Further out, U of T’s Helmy predicts quantum computers will eventually make it possible for machine learning algorithms to not only spot patterns and draw conclusions from huge historical data sets, but to crunch data pulled in from cellphones and other globally dispersed sensors on the fly. That, in turn, could allow for real-time identification of disease outbreaks or impending terrorist attacks.

“Machine learning relies very heavily on the capacity of computation,” says Helmy, who praises CDL for taking a calculated gamble on an emerging technology that could yield huge dividends for Canada down the road.

What remains to be seen is whether CDL’s quantum startups can identify viable business applications and attract enough investment to stay afloat until quantum computer-makers like Rigetti, IBM and others successfully develop full-blown quantum computers.

It shouldn’t take long to find out. With a month of specialized training behind them, Schaffer and the rest of CDL’s first quantum cohort are now preparing to be subjected to the lab’s regular program of meeting clearly defined business goals.

Schaffer, for one, is optimistic despite the challenging road ahead. “There is certainly the possibility of doing some interesting things with this technology today,” he says.

“But the really fascinating question is: What’s going to happen tomorrow?”