November 11: U of T Remembers 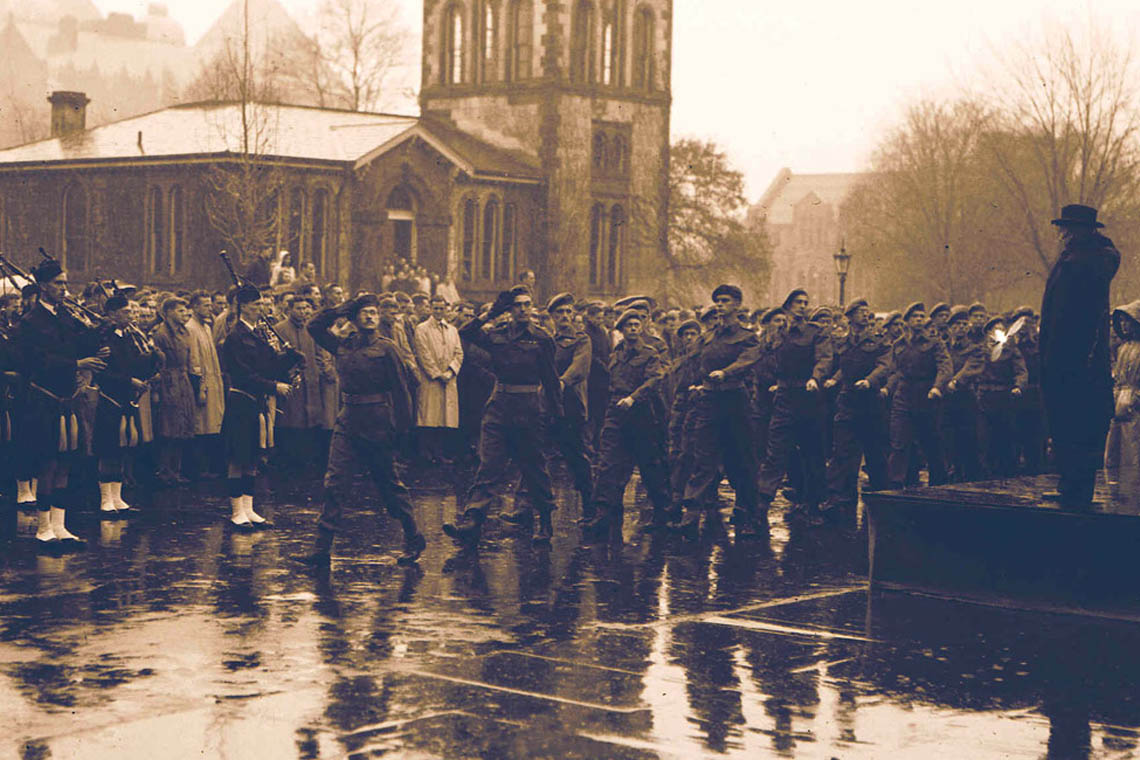 The University’s Remembrance Day service outside of Hart House in 1947 (Photo: U of T Archives)

On Friday, the Soldiers’ Tower memorial at U of T will be the site of one of the city’s most widely attended Remembrance Day services with its carillon of 51 bells ringing out for fallen soldiers.

It is one of several Remembrance Day ceremonies that will take place across U of T’s three campuses, honouring the service and sacrifice of thousands of  members of the U of T community, including more than 1,000 students, alumni and faculty who gave their lives in the First and Second World Wars.

The tower and its museum came out of volunteer efforts from U of T’s Alumni Association. U of T archivist Harold Averill says the idea for a tower with bells, honouring fallen soldiers came from a young woman who suggested it during a meeting in 1918, although the 143-foot tall Gothic tower would take another six years to be built.

Many of the names etched in the tower’s memorial wall came from memorials that initially appeared at University College and Victoria College. Returning students took on the task of raising funds for them. A history professor was seconded to pull together the names of all fallen soldiers from across the university.

Inside the museum, you can learn about notable alumni including:

U of T News presents a few of the stories honouring the brave women and men who have served our country in uniform:

Remembering the veterans of Sunnybrook In Memoriam: remembering the First World War at U of T Archivist Harold Averill discusses the war that changed the world.

In Flanders Fields: why the iconic poem by U of T alumnus endures, 100 years later As Canadians commemorate Remembrance Day this year, many will reflect on the solemn beauty and eloquent simplicity of the iconic war poem, In Flanders Fields. This is the 100th anniversary of the poem written by University of Toronto alumnus John McCrae, a Canadian doctor who was in the trenches during World War I.

U of T archivist Loryl MacDonald takes us through the Fisher Library's exhibition, We Will Do Our Share: The University of Toronto and the Great War.

Dr. Homer Tien: from the battlefield to the ER Dr. Homer Tien, recipient of the Order of Military Merit  and assistant professor at U of T and director, trauma services, at Sunnybrook Health Sciences Centre, recalls his exceptional advancements. Few people have served nearly four decades in the Canadian Forces. Fewer of these are doctors. Fewer still are women. And only one of these – University of Toronto medicine graduate Dr. Hilary F. Jaeger— has retired with the rank of brigadier general after serving as surgeon general of the Canadian Forces. Dr. Andrew Beckett is a highly credentialed trauma surgeon who has spent nearly two decades in the Canadian Forces – and whose work in war zones has led him to ask questions that never occur to most of his research colleagues back home.