#WeTheNorth: U of T students, faculty and staff cheer on the Raptors 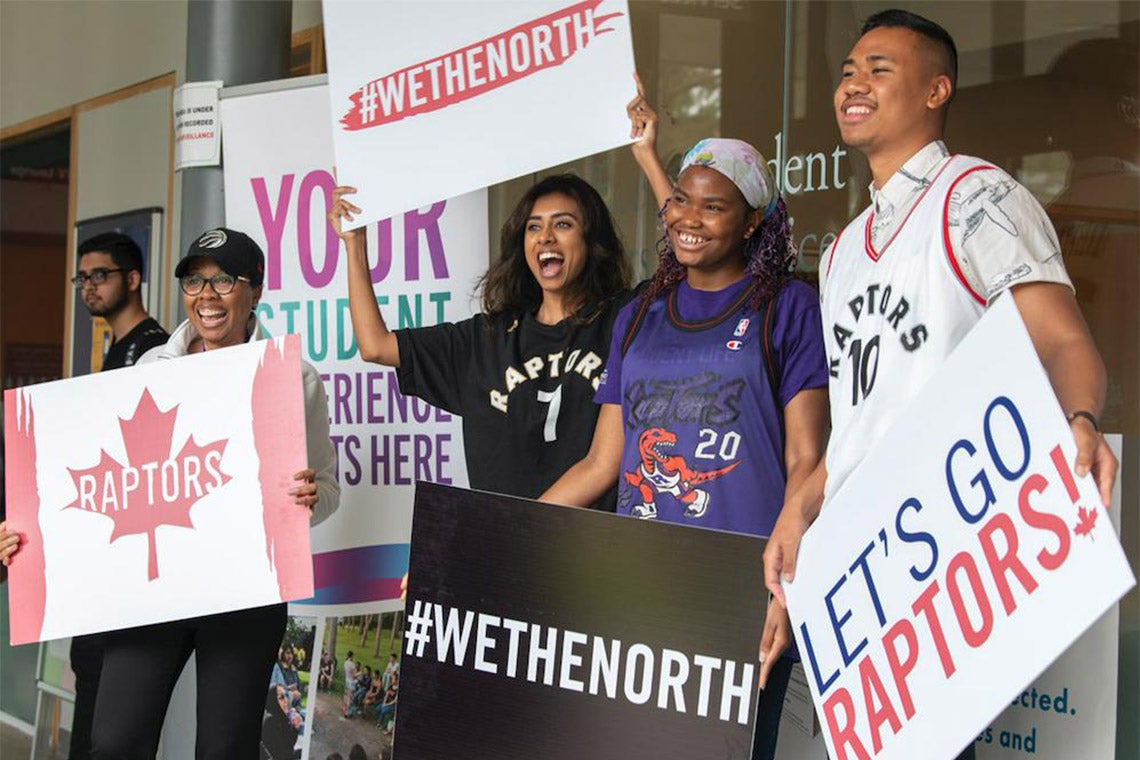 Support for the Raptors was on full display at U of T before, during and after the team's Game 1 win over the Golden State Warriors (UTSC photo via Twitter.com)

The Toronto Raptors’ long road to the NBA Finals started before most University of Toronto undergraduate students were born. But that didn't stop them from being among the loudest, proudest fans cheering on the team last night.

Students – as well as many faculty and staff – held viewing parties on campus and took to social media to celebrate as the Raptors defeated defending champions Golden State Warriors in the opening game, 118 to 109.

“Their defense was great, and it wasn’t our best night,” Golden State coach Steve Kerr told reporters after the game. “We just got outplayed.”

The win came as no surprise to John Campbell, head coach of men’s basketball at U of T, who predicted the Raptors will win the series.

And it made total sense to U of T’s Jeffrey Rosenthal, a professor in the department of statistical sciences and author of Knock on Wood: Luck, Chance, and the Meaning of Everything. Rosenthal predicted a Game 1 win and gave the Raptors the edge to win the NBA Finals.

As for simply being Raptors fans, here's a snapshot of what took place elsewhere among the U of T community over the past 24 hours: 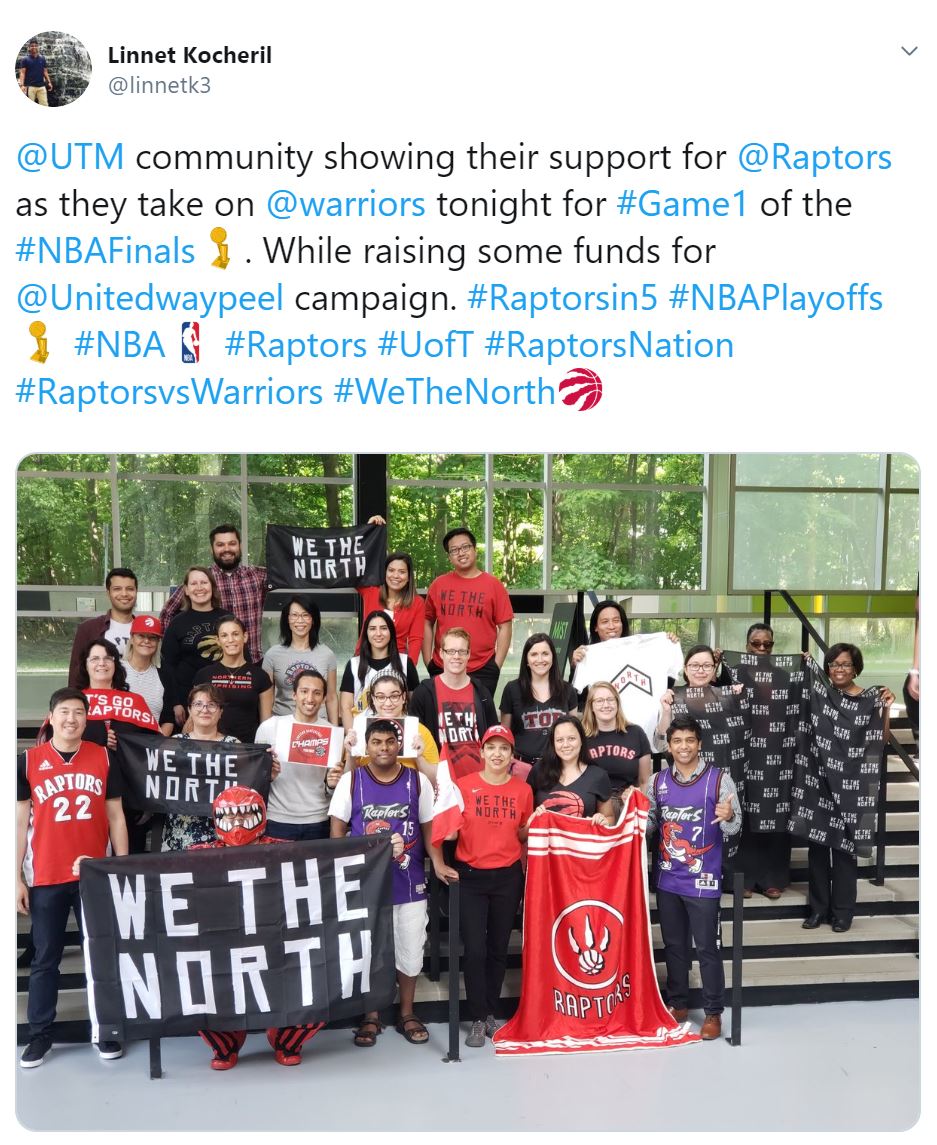 Students, faculty and staff show off their Raptors gear at U of T Mississauga. 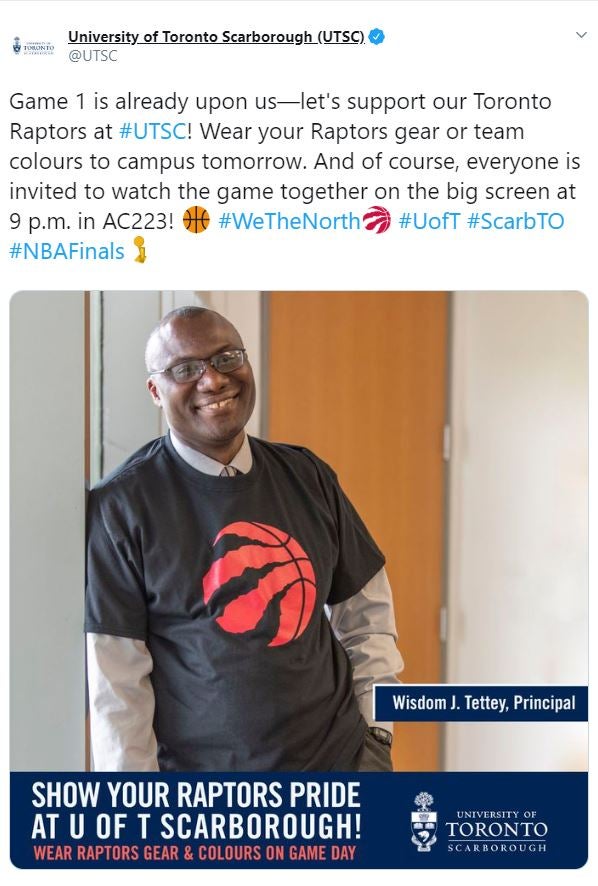 Wisdom Tettey, vice-president and principal of U of T Scarborough, added a Raptors tee to his wardrobe. 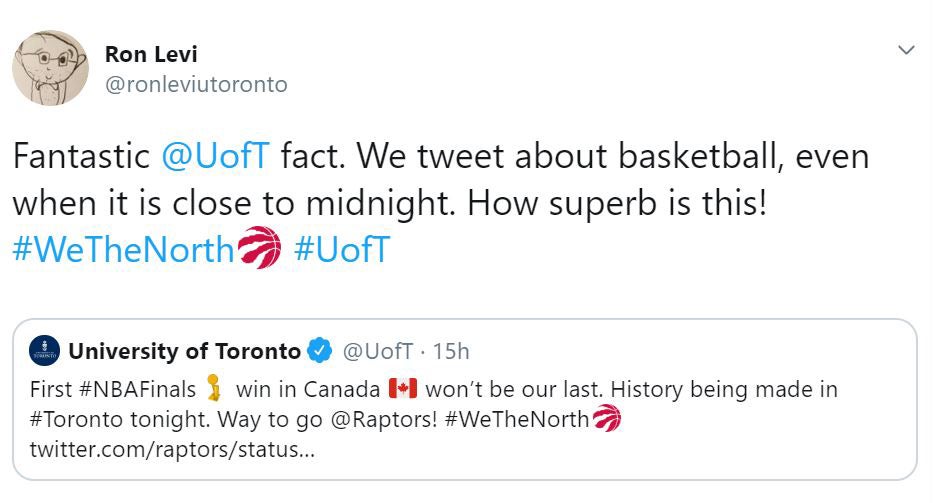 Faculty member Ron Levi weighed in on U of T’s support of the Raptors and their history-making NBA  Finals appearance. 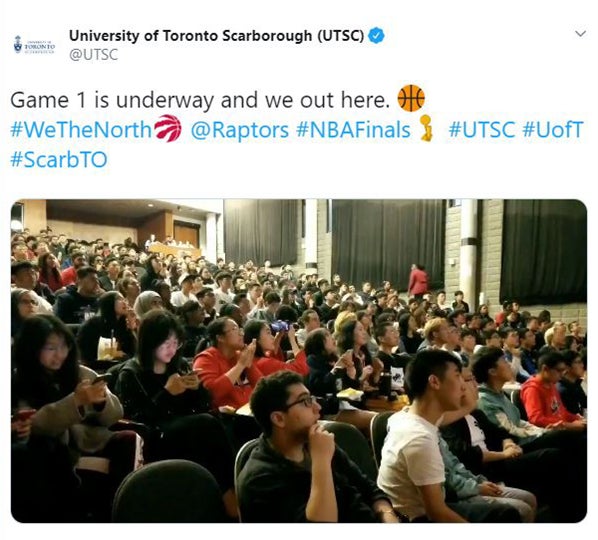 Students gather to watch the game on a big screen at a viewing party at U of T Scarborough. 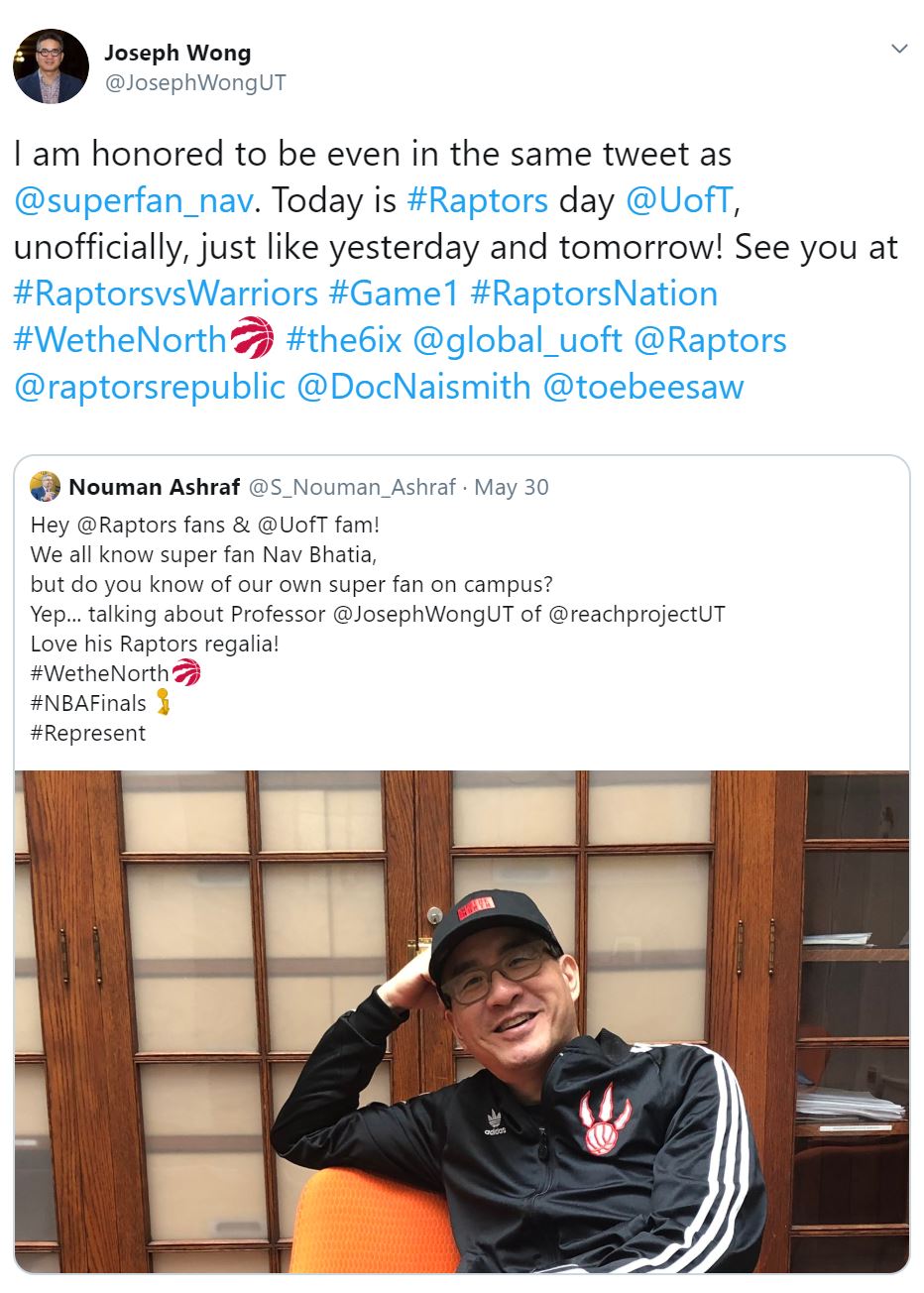 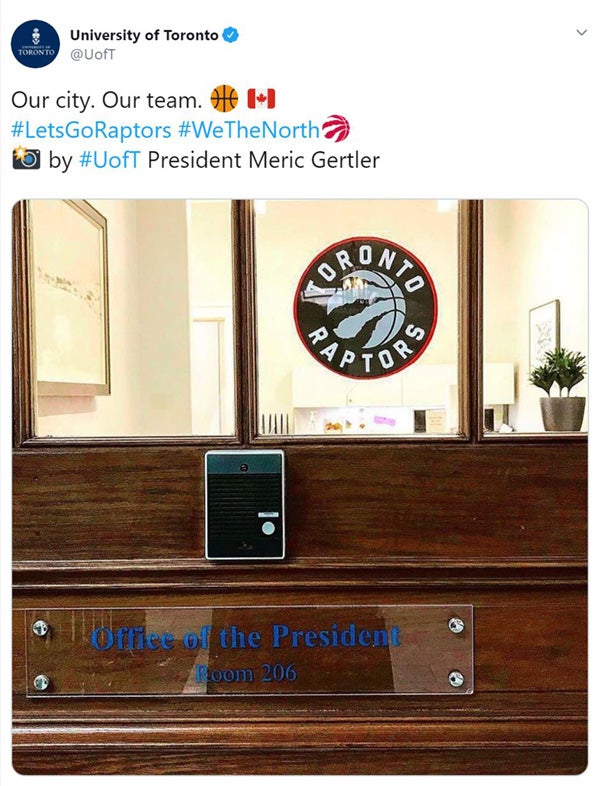 President Meric Gertler is a Raptors fan, too. 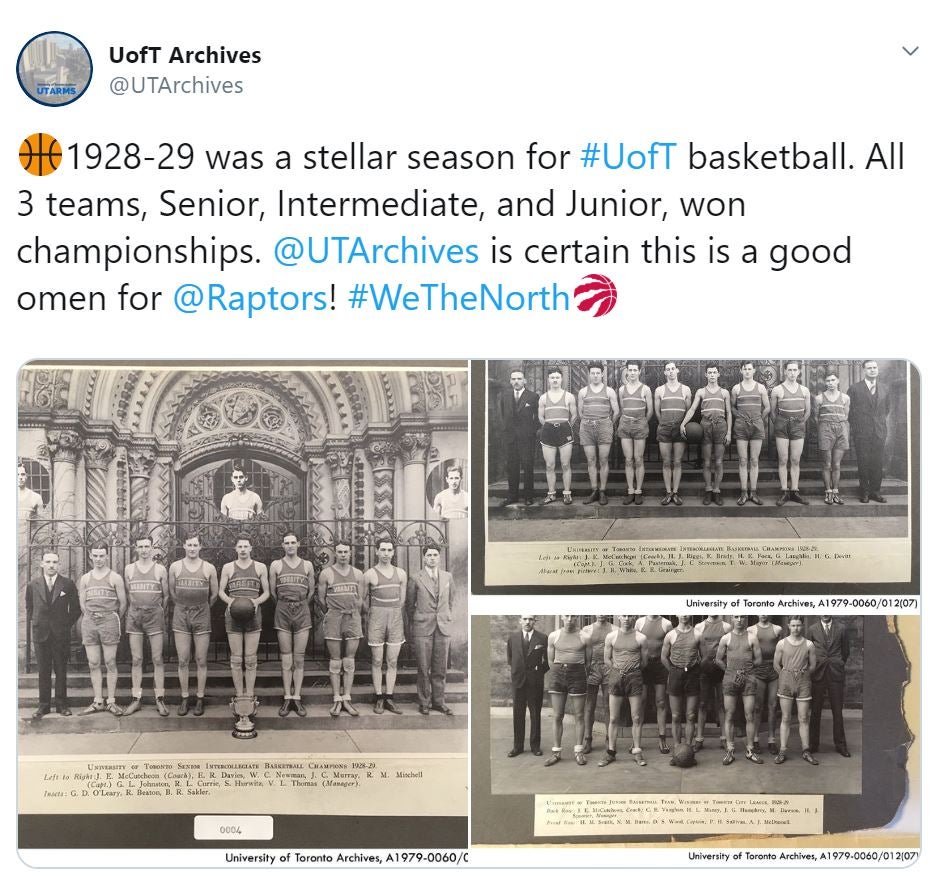 The University of Toronto Archives takes a historical look at the situation. 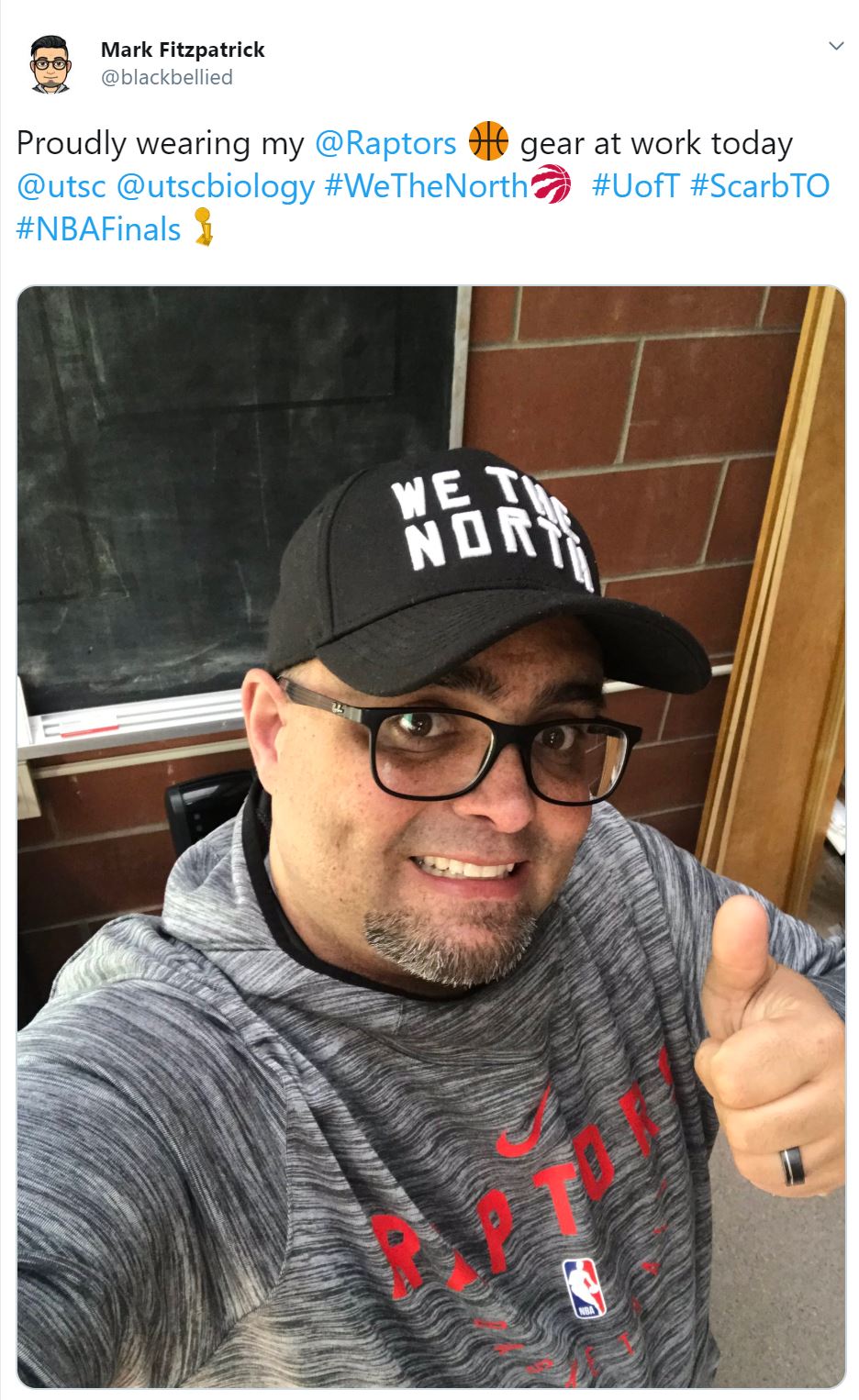 Faculty member Mark Fitzpatrick is decked out in Raptors gear at U of T Scarborough. 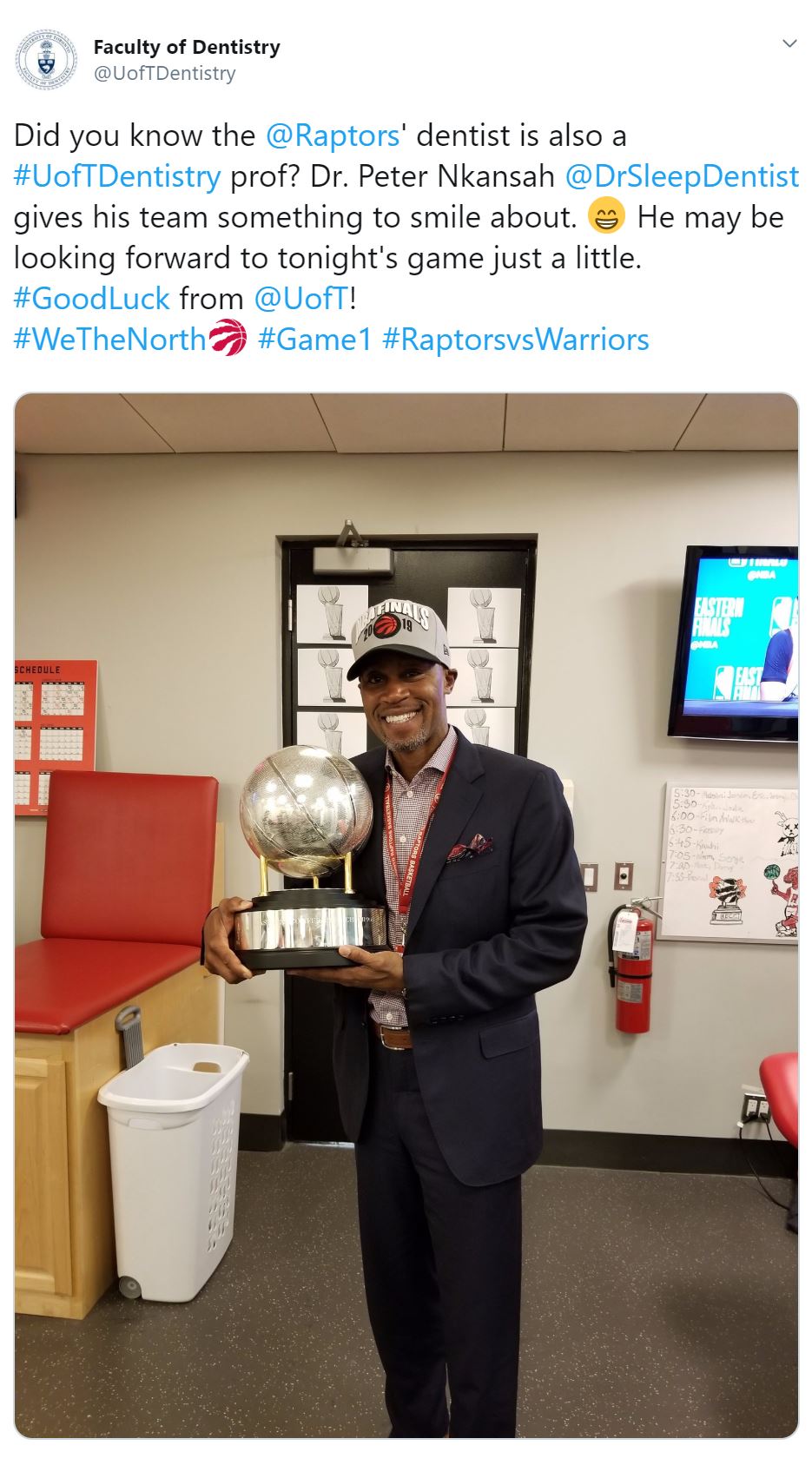 Some members of the U of T community have been monitoring the Raptors closer than others.

Jurassic Doc: Howard Petroff Keeps the Raptors in the Game

A deal with the Raptors: U of T dance-tech startup builds industry cred

Raptors' dentist preps for NBA All-Star Game: “When they're hit, they're hit hard”