'Win it in six': U of T basketball's head coach on Raptors' chances, what NBA Finals mean for Toronto 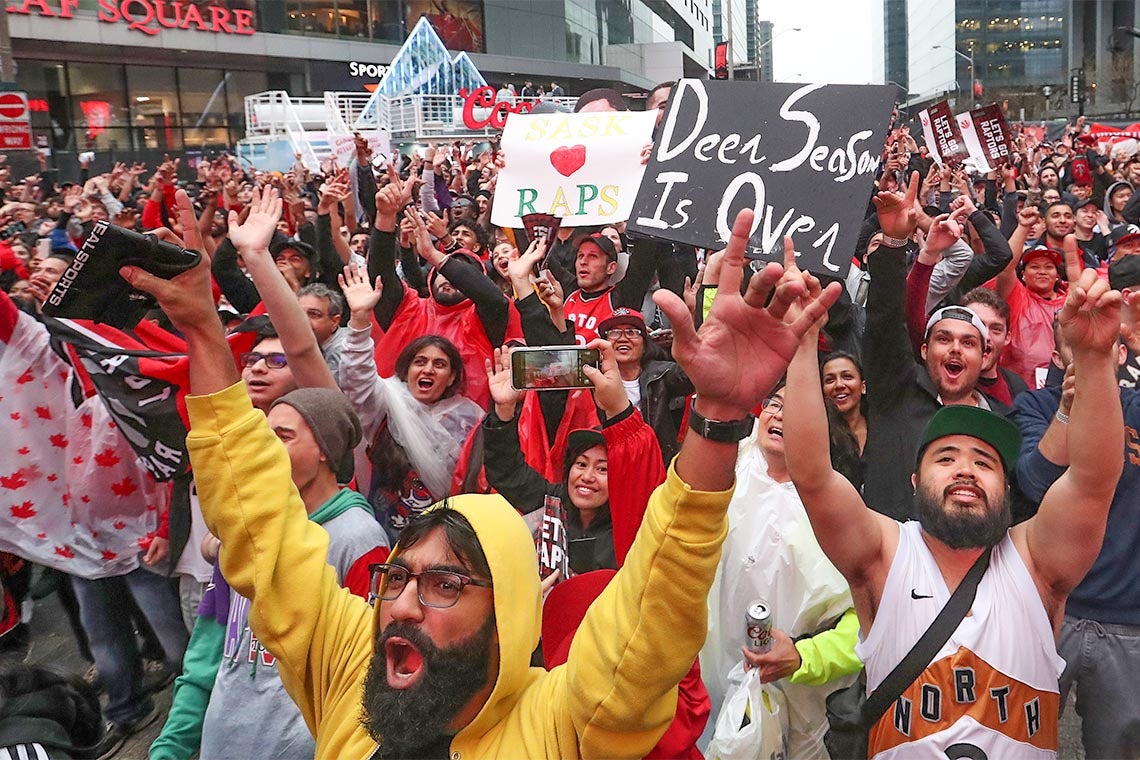 Toronto fans, some with signs and Drake cutouts, cheer in Jurassic Park as the Toronto Raptors play the Milwaukee Bucks in Game 6 of the NBA Eastern Conference Final in Toronto (photo by Steve Russell/Toronto Star via Getty Images)

After the Toronto Raptors’ historic win against the Milwaukee Bucks, the city erupted in celebrations with thousands of ecstatic fans flooding the streets and everyone from former Raptors’ players to Canadian Olympians to politicians flooding social media with congratulatory posts.

Now, as the city prepares to host Game 1 of the NBA Finals against reigning champions the Golden State Warriors, U of T’s Jelena Damjanovic caught up with John Campbell, head coach of men’s basketball at the university, to get his take on how the NBA’s lone Canadian franchise managed to unite a whole city and what it means for the future of basketball in Canada.

What does hosting the NBA finals mean for the city of Toronto and for basketball in Canada?

It’s certainly new territory. You can feel the excitement across the city – not just with basketball fans – but with people who maybe have a peripheral interest in the game or have kids that play it. It’s tremendous and I think over the next two weeks the excitement is going to be incredible, but I also think we’ll see a couple of spinoffs over the next couple of years, because of the success and the exposure of the game to the people in the city and across the country.

Right now we’re already riding the wave of the Raptors’ success in the past with a number of kids playing the game across the country and in the GTA especially, so basketball’s in a very good place. Coming into a World Championship year, I think you’re going to see the talent that Canada has produced over the last couple of years on display this summer in China and then next summer in Japan at the 2020 Olympics. The idea that all these kids who are now 10 or 15 years away from that next wave of players have this opportunity to watch this team is incredible. You certainly wouldn’t be surprised if 15 years from now you see that next group of kids at the forefront of Canadian basketball.

Many have observed the diversity of the Raptors’ fans, as well as their unity in support of the team. How do you explain the broad appeal of the Raptors to a city as diverse as Toronto?

Basketball is similar to soccer. It’s an accessible game, something that’s played worldwide, that’s open to people of all socio-economic backgrounds. The Raptors’ fan base is reflective of the GTA, which is an incredible, multicultural mosaic. You can see that in the arena and in Jurassic Park during the games. I think MLSE (Maple Leaf Sports & Entertainment) has done a great job of making the Raptors representative of the community and I think the community feels that connection, which they may not feel in the same way with hockey perhaps.

What role did the fans play last Thursday in helping the Raptors turn around their fortunes from trailing 13 points behind Milwaukee at halftime to beating them 100-94 at the end of the game?

The players have a sense of support when they play at home and you could feel it throughout the playoffs and through the regular season, as well. They’ve played really well at home and you notice a lot of the players, especially the supporting cast, really played better or played quite well at home. I think that’s something that we’ll look for going forward into the finals – perhaps that starting the series at home is a real bonus for the Raptors.

Could the fans’ support sour with the soaring ticket prices for the NBA Finals?

I think for a lot of fans attending the games in the arena is probably a bit out of reach, but it’s great that MLSE is bringing Jurassic Park versions to Mississauga, Brampton and Burlington, giving opportunities for fans to get together and watch the games together. We’d all like the chance to witness the game in the arena, but at the same time the number of people that constantly ask you where you are going to watch the game…it brings neighbourhoods together, brings the community and friends together. I think we’re all going to know where we were when we watched the Raptors win a championship.

So you think the Raptors are going to win this thing?

I think the Raptors have a great chance. I think they’re going to win it in six.