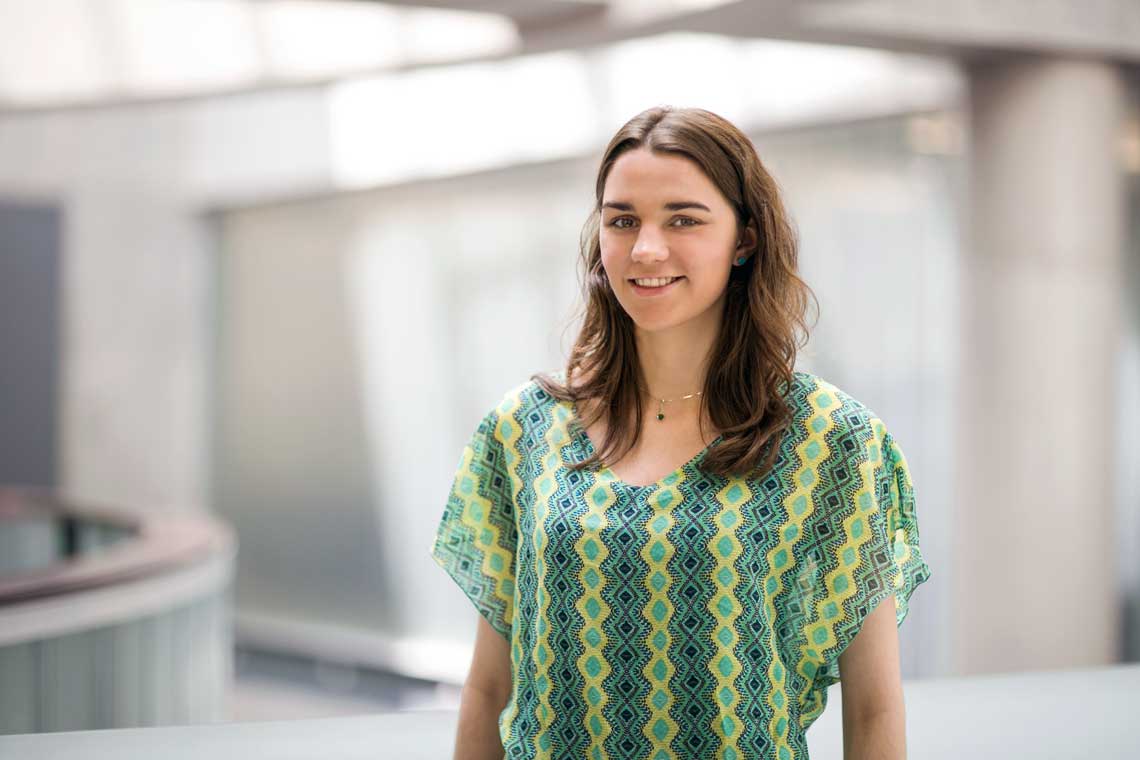 Jessica Phillips: “My time at U of T has helped me identify my passion and given me the means to pursue it”

Using her studies to make the world a better place

For Jessica Phillips, it all started under water, six years ago, off the coast of Belize.

“There were sea turtles swimming under me, and reef sharks all around,” the 22-year-old recalled in the Junior Common Room of University College.

“It was a really pristine area, and the coral reefs were so beautiful.”

“I thought there should be more places like this: undeveloped, the way they originated. I wanted to protect more species, more areas. That is how I became interested in wildlife biology.”

And this is how the native of Hong Kong started an academic career at that led to her being named one of three 2016 Rhodes Scholars from the University of Toronto.

Phillips is one of 13,500 U of T students expected to cross the stage at Convocation Hall to receive their degrees during ceremonies that run from May 31 until June 16. Some are already working; some, like Philips and fellow U of T Rhodes Scholars Kaleem Hawa and James Flynn, will be pursuing further studies. Over the next few weeks, U of T News will be telling their stories.

“Jessica Phillips will be following in the footsteps of prior UC Rhodes Scholars, such as former U of T president David Naylor and former Ontario premier Bob Rae,” commented University College principal Donald Ainslie.

“And the research she does at Oxford on climate change will continue the UC tradition of using academic studies to make the world a better place.”

Phillips will pursue a DPhil – the Oxonian PhD – in zoology at Merton College. Her BSc studies at U of T were as a specialist in ecology and evolutionary biology, a major in biodiversity and conservation and a minor in psychology.

Her particular interest is the Antarctic, the least interfered-with of the seven continents.

“That is a good enough reason for us to want to protect Antarctica,” Phillips said. “But of course there are a lot of other reasons. The ecosystem is fragile. Development can have drastic consequences. Species could interact with the effects of climate change.”

She expects her sojourn in Oxford to include a field trip to Antarctica to study gentoo, chinstrap and emperor penguins and observe how reduced ice cover and increased fishing affect their distribution and ability to thrive.

Raised mostly in Beijing, the daughter of psychiatrists practicing in central China is accustomed to travel. By her second year at U of T she was working with Professor Martin Krkosek at the Salmon Coast Field Station off Vancouver Island. Last summer Phillips was involved in study of sub-arctic hummingbirds in Churchill, Manitoba.

“The arctic is getting warmer earlier, so the bugs emerge earlier,” she told UC Magazine. “Unfortunately, the birds can’t evolve fast enough to time their migration to the time when the bugs are appearing.”

Although she spoke English at home – her father is Canadian, her mother American – Phillips was schooled in Mandarin until she was 16, when she enrolled in an international school in Shanghai.

“I wanted to start learning the scientific terms in English,” she said. “So it would be a less difficult transition.”

U of T was a natural choice for post-secondary education because of its reputation and the presence in the Toronto area of relatives, whom she paid regular visits during the summer.

“My impression of Canada was sunshine and lakes,” Phillips said. “People talked about Canadian winters but I never really experienced them.”

Phillips has learned much about the Canadian ecosystem through her undergraduate field work but also as president of the Duke of Edinburgh’s Award Club, a position that involved organizing hiking expeditions. She has maintained her links to China as a member of the U of T Mandarin Debate Club.

“I try to read the novel in the language in which it was published,” Phillips said of her reading habits. “You lose a lot in translation.”

Phillips regards her unusual upbringing as a blessing. “I think that helped me a lot,” she said. “Especially in terms of being able to understand multiple cultures. This has shaped my world, growing up like that.”

A university as diverse as U of T was a perfect place for Phillips. But it was the academic environment that made the biggest difference.

“My time at U of T has helped me identify my passion and given me the means to pursue it,” Phillips said.

“Be proactive,” is her advice to students starting out. “Seek out opportunities.”