“There are so many places I want to see” 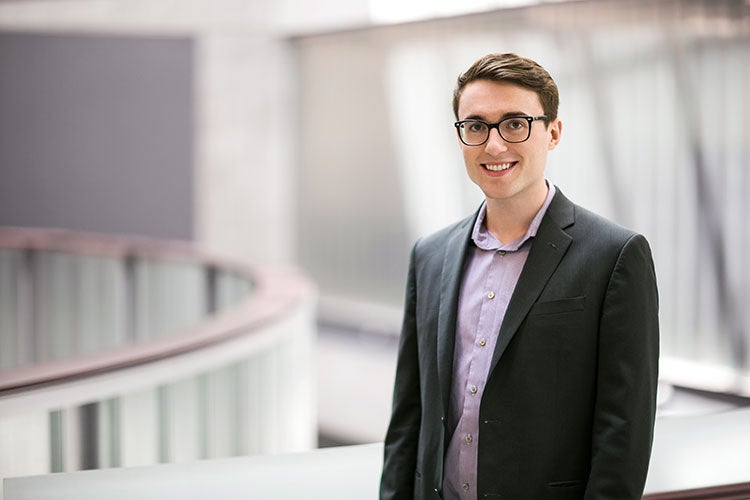 James Flynn’s advice to new U of T students: Plan for the big picture but don’t put off the small stuff (Diana Tyszko photo)

Newfoundland and Oxford might seem far removed in some respects, but the hop from St. John’s International Airport to Heathrow in London is only five hours.

Nevertheless, James Flynn, 22, who is one of three 2016 Rhodes Scholars from the University of Toronto, expects to be travelling more often to European destinations than to his home province when he has a few days off.

“There are so many places I want to see,” the Trinity College double major in economics and political science said recently in the Arbor Room.

Flynn will graduate with a BA in June and spend two years at the University of Oxford. He is just one of 13,500 U of T students expected to cross the stage at Convocation Hall to receive their degrees during ceremonies that run from May 31 until June 16. Some are already working; some, like Flynn and fellow U of T Rhodes Scholars Kaleem Hawa and Jessica Phillips, will be pursuing further studies. Over the next few weeks, U of T News will be telling their stories.

Flynn plans to study philosophy, politics and economics at Pembroke, an Oxford college founded in 1624 by James I and associated with Samuel Johnson and J.R.R. Tolkien (among writers) and Hungarian Prime Minister Viktor Orbán (among active political figures).

“It’s Oxford’s classic degree,” Flynn says of the Oxford BA, which, according to the dictates of a centuries-old tradition, transforms into a MA (Oxon.) after seven years.

“It offers the tutorial experience that Oxford is well known for. And it gives you time to explore a lot of topics. Master’s degrees are more focused.”

Variety comes naturally to Flynn. “James is extremely insightful and a very interdisciplinary scholar,” says Shari Eli, an assistant professor of economics. “It is clear that he has a very bright academic future.”

Lynette Ong, an associate professor of political science who is cross-appointed to the Munk School of Global Affairs, admires his determination to make a contribution to the real world: “Once he had found a social issue he's passionate about, he's amazingly devoted, driven and resourceful.”

The plan after Oxford is law school – back at his alma mater. Flynn has deferred an offer of admission by U of T Law.

Writing submissions should not be a problem. Flynn served as news editor and managing online editor of The Varsity, an experience that enhanced his writing skills even if it lent a journalistic tone to some of his academic essays.

Flynn is proud of having taught himself to prefer the active to the passive voice: “That is something that I never would have thought of before I worked at The Varsity.”

He is also capable of teaching others, according to former Varsity editor-in-chief Danielle Klein: “James was a generous mentor who helped his writers develop their talents, and a skilled editor who curated his section with great care.”

The Varsity also provided a community outside the classroom. Finding a club or activity is one of Flynn's prime recommendations for a successful undergraduate career.

“U of T is obviously a big school,” he said. “It can be hard to find your place. On the flip side, there are so many opportunities, so many clubs and groups. There is something for everyone.

“Make sure you get involved. Yes, you are spending time on things that are not academic. But somehow it helps you manage your academic time.”

Another aid is a wall-size calendar that lets you put the near and distant future in perspective.

“They sell them at the book store,” Flynn says of these calendars. “Write out every day in the semester that you have a task, that you have an essay due.

“That way you can visualize when you are going to be busy and know when to start. Big-picture planning is probably the biggest thing that helped me.”

More advice: Don’t put off the small stuff. “Do things as you get them. Especially the small tasks: grocery shopping, laundry. I find that making sure I do the small tasks as soon as possible really helps.”

Finally, take advantage of courses with a high cool factor that are not necessarily related to your major. In his final year Flynn took a course with no obvious connection to political science or economics: The Beatles.

“It was a great course,” he said of MUS 321 with Professor James Kippen. “One of the best I’ve had.”

Flynn mentions Eli, Ong, Donald Kingsbury and Kanta Murali among professors who helped him succeed. Two other people who need to be mentioned are Wanda Parsons and James Flynn, his mother and father, both physicians.

“I am incredibly grateful to my mom and dad for their guidance and support over the years,” Flynn said. “They have worked so hard to give me opportunities to succeed.”

Flynn will spend part of his summer at home in Newfoundland as a volunteer at SHAD, a program that helps high school students find their focus. He is an alumnus of this program himself.

“A combination of camp councillor and mentor” is how he describes his role.

Then Flynn returns to Toronto to join his fellow Rhodes Scholars on their way to Oxford.

“All the Canadian scholars fly as a group,” he explained. No short cut available.