Three U of T faculty, PhD student honoured with Royal Society of Canada awards of excellence 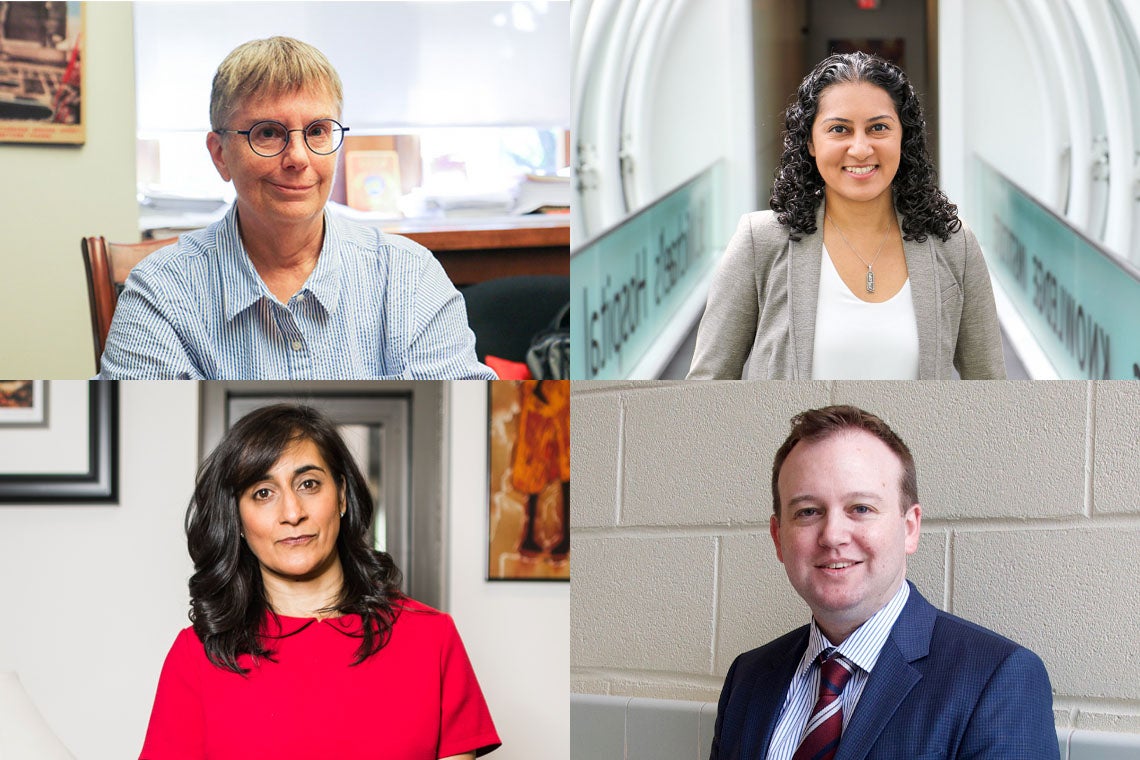 Three University of Toronto faculty members and a PhD student have been honoured with prestigious awards from the Royal Society of Canada, the nation’s academy of scholars, scientists and artists.

As part of its mandate to promote academic excellence, the Royal Society administers more than 20 awards  – many named after great Canadian scholars – for outstanding achievement in the sciences, social sciences, humanities and arts.

“We are proud that the Royal Society of Canada is recognizing Anita Anand, Dwight Seferos and Lynne Viola, all leaders in their disciplines, and Fahima Dossa, an up-and-coming scholar,” says Vivek Goel, U of T’s vice-president, research and innovation, and strategic initiatives.

“Their impressive work is a reflection of the University of Toronto’s excellence in research across a broad range of disciplines. We congratulate them for the prestigious honours bestowed upon them.” Lynne Viola, a celebrated historian who is one of the world's leading scholars on the Soviet Union under Josef Stalin, has published four books and edited 14 volumes of archival documents about the history of violence in the Soviet Union during the 1930s.

Viola’s works focus on the supporters of Stalin’s regime, state government resisters, Stalin’s victims and, in her most recent work – 2017’s Stalinist Perpetrators on Trial – the people who implemented Stalin’s Great Terror, a campaign of political repression from 1936 to 1938. Her book is the first English work to shed light on Soviet perpetrators of violence.

For her research, Viola was given access to Russian and Ukrainian archives that had long been kept secret, including the KGB's.

She says she undertook her work to correct the historical record and place formerly classified documents in the public domain forever.

“History is so important – the cliché is that we learn it so we don’t repeat the past. But we also learn it so we know what happened in times of extreme violence, of economic failures, of social upheaval,” says Viola, who won the Killam Prize earlier this year.

“I have no illusions. Most of my students, when I lecture on Russian history, won’t remember much about Russian history,” she adds. “But if I have managed to succeed in their being able to read newspapers critically, to me that’s a success. Particularly in this day and age of so-called fake news and lying presidents and so on.”

Viola says she is grateful for the Pierre Chauveau Medal, saying the work of researchers in the humanities isn't always recognized.

“It’s unsettling to me, really. I’m used to being ignored. This is what historians do – we sit in archives and libraries,” she says. Dwight Seferos is a synthetic chemist devoted to using modified natural compounds to make high-tech items like batteries for transportation and eco-friendly clothing.

The McLean Award-winning scientist and his lab have been busy this year, developing synthetic compounds that replicate “high value” plastics but are greener.

“We’re not making things that are structural components – they’re usually some kind of electronic or optical material, a high-tech version of plastic,” says Seferos, whose lab is also developing applications such as lighting displays and thermoelectric generators. “We’re still trying to think about recycling down the line, recovering them, because that’s a real problem.”

His focus is also on his startup, Pliant Power Devices, an endeavour he continues to develop with his former student Tyler Schon. With the help of U of T incubator hubs UTEST and the Entrepreneurship Hatchery over the last two years, the startup has started to draw international interest. The goal is to reach a level of profitability while still applying the fundamental science.

Seferos, who was given an NSERC E.W.R Steacie Memorial Fellowship this past spring, says “it’s been a great year in terms of awards, but I don’t think getting them changes too much about your daily life. You still go to work, work with students, publish your results and write grant [proposals].

“It’s nice to get an award like this and the Royal Society is prestigious. To be recognized is really amazing.” Anita Anand’s research revolves around good governance. The scholar looks closely at better governance for entities like boards of directors and advisory boards – in both the public and private sectors. She researches the best or most appropriate governance mechanisms for those organizations.

The work that she undertakes involves “one of the fundamental issues of our time,” she says. Boards have significant influence on organizations, businesses or non-profits – and they, in turn, have a lot of influence on the public.

“[Corporate governance involves] many different types of issues. There are issues of fairness, access, efficiency and representation – and democracy,” says Anand, who is currently researching, among other things, the state of whistleblower laws in Ontario. “These are all key principles that are wound up in the concept of governance.”

Read more about Anand in the Globe and Mail

An ongoing question in her research is why the relationship between ethics and the law are sometimes in conflict.

“No matter of law can ensure that people act ethically. There’s something over and above the law that matters for ethical conduct,” says Anand, who has advocated for, and designed law courses on,   corporate governance and ethics.

Her efforts helped her garner a Law Foundation of Ontario Research Award in 2016.

“I think it is important to show recognition – not for me, personally, but for all the new researchers coming through, that there is recognition for the work that you do,” adds Anand, who is cross-appointed to the Rotman School of Management.

“I love my work, it’s not going to deter me or make me do anything too different. It’s great to be able to have that and share it with my friends, family and faculty.” In her PhD work at the Institute of Health Policy, Management and Evaluation at the Dalla Lana School of Public Health, Dossa's thesis evaluates how inconclusive results from tests for genetic forms of breast and ovarian cancer affect women's health-care decisions.

Dossa, who is a surgical resident, has put that on hold to pursue graduate training while participating in U of T's surgeon scientist training program.

“[The PhD work has] been a transformative experience for me as far as understanding the science behind what we do, but also changing the way I think about diseases and processes and even my approach to patients,” says Dossa, who also has research interests in colorectal disease and emergency surgery.

Dossa has a side project focused on issues of equity in surgery – the pay gap between male and female surgeons. She looks at patterns of gender bias in how surgeons are being renumerated.

Dossa says she is honoured to receive the Alice Wilson Medal. “I was pleased to see that the Royal Society of Canada has been making an active effort to recognize the contributions of women to research in Canada,” she says. “When you look at the list of previous Alice Wilson Medal winners, it’s a stark reminder of the incredibly talented women who are doing groundbreaking work across the country.

“To be recognized among that group of women is very motivating and a real honour.”