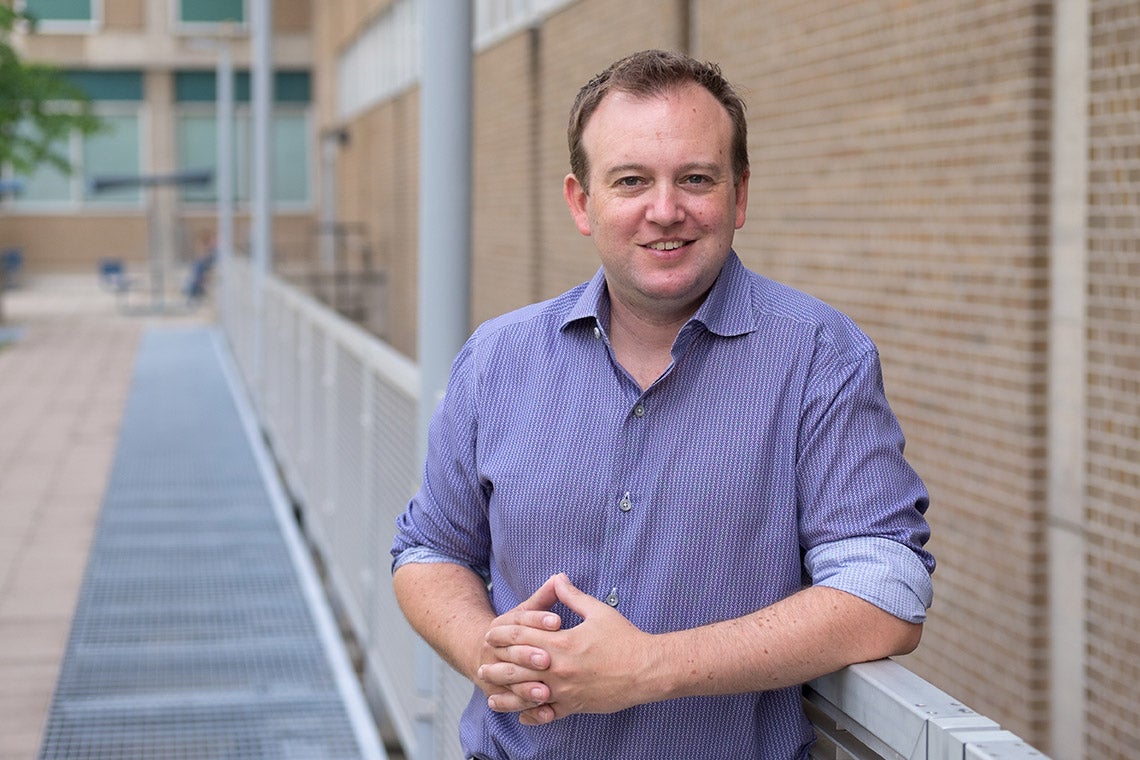 Dwight Seferos is this year's recipient of the $125,000 McLean Award. “No-strings-attached awards like the McLean are unique and very crucial,” he says (photo by Geoffrey Vendeville)

Nature knows best, but sometimes a tweak here and there can make things even better, says University of Toronto chemistry professor Dwight Seferos.

Together with his team of graduate and postdoctoral researchers, Seferos is at the forefront of using modified natural compounds – like a vitamin found in leaves – to make high-tech items such as eco-friendly batteries and potentially clothing that can act as the wearer’s personal cooling system.

“We’re trying to take inspiration from nature,” said Seferos. “You can modify natural compounds to make them better. That’s been done in the drug industry, but not so much in the high-tech materials industry.”

Seferos is this year’s recipient of the $125,000 McLean Award, which he will use to delve deeper into developing new biodegradable polymers or plastics that can store energy from solar, wind and tidal power.

The importance of the research is not just about energy storage, he said. Used on a large scale, it could also mean a substantially reduced carbon footprint, a decrease in extractive mining fossil fuel usage, as well as less waste in landfills and oceans.

The McLean Award is jointly funded by the university’s Connaught Fund and the McLean endowment, the latter of which is the result of a $1-million gift to the university from alumnus William F. McLean over two decades ago. The award is designed to support the basic research of an outstanding early career researcher in physics, chemistry, computer science, mathematics, engineering sciences, or the theory and methods of statistics. The funds help the recipient attract and support graduate students and post-doctoral researchers of great promise.

“Congratulations to Dwight Seferos on receiving this year’s McLean Award for his impressive and cutting-edge work in eco-friendly batteries,” said Vivek Goel, U of T’s vice-president of research and innovation and the chair of the Connaught Committee.

“No-strings-attached awards like the McLean are unique and very crucial,” said Seferos.

This is “an award that allows you to form new ideas, to do things that you normally wouldn’t be able to do – to take risks – which I think is extremely important for researchers at a university.”

Freedom to do basic, or fundamental, research is where everything starts, said Seferos, who is also the co-founder of Pliant Power Devices, a startup formed with his former student Tyler Schon out of his PhD research and the help of U of T entrepreneurship hubs UTEST and the Hatchery.

“We did not start this project thinking we were going to make a battery company or anything like that,” said Seferos. “We were developing new concepts in chemistry and engineering [and] those turned out to be fruitful – and we went from there.”

Their vitamin B2 polymer, which is made from leaves and other organic materials, is a relatively simple compound to make that’s just “a few steps from natural compounds,” he said.

“We’re just modifying it enough that it serves what we want it to do. It’s a very eco-friendly and renewable resource. You can scale it up and make kilograms of this compound. It stores a great deal of energy.”

It’s also printable and flexible, offering virtually limitless potential applications. Large-scale production of the B2 polymer batteries is not far off – within a year or two, he added.

“We’ve been out front of the polymer space in energy storage for a number of years,” said Seferos.

His group is also highly interested in thermoelectrics, and is collaborating with groups in the United States and China to use soft materials made from their polymers to recycle heat and turn it into electricity and the growing field of personalized cooling.

In a developed country like Canada, he said, many people have air conditioning in their car, in their home and in their office – which leaves a huge carbon footprint.

By making clothing that can cool people, “they won’t need the huge AC unit in their home or their car,” he said.

“As professors, we’re not trained as businesspeople but our students can certainly acquire those skills,” he said. “When they develop new technology during the course of their PhD, they become such great champions of that technology that they’re the natural leaders for spinning it out.

“I am supportive of that.”

The application deadline for the next round of funding for the McLean Award is Jan. 15.