Summer school for startups at U of T 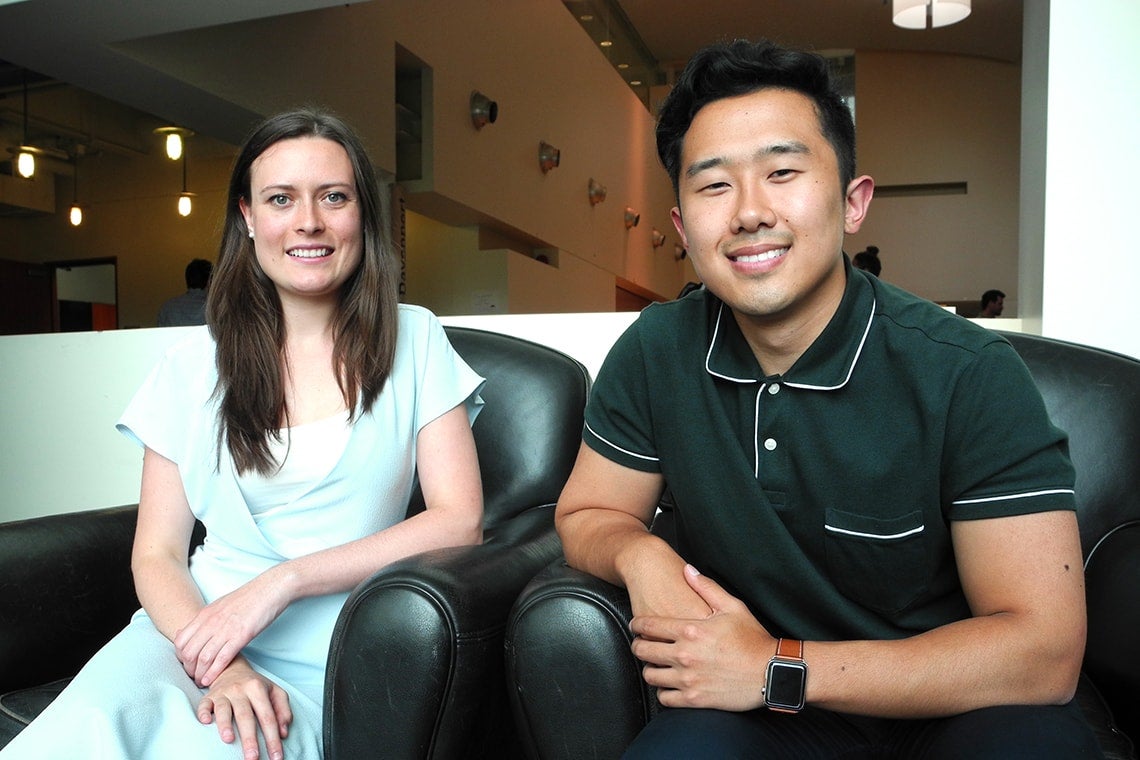 Alicia Jarosz (left) and Kyle Wang (right) were strangers when they enrolled in a week-long entrepreneurship program at U of T. Now they're co-founders of a health-care startup (photo by Chris Sorensen)

At least, that was Alicia Jarosz's experience. The graduate student at the University of Toronto recently enrolled in the Impact Centre’s Techno bootcamp – one of several entrepreneurship programs being run at U of T over the summer months. She hoped to to build a diet-oriented smartphone app.

One week later, she exited as the co-founder of a health-care startup that plans to use genetic information to help physicians prevent dangerous drug reactions.

“It was a total tangent,” says Jarosz, who who is completing a master's degree in nutritional science and whose lab research explores how genes impact what people can eat. “I was in the middle of an interview when [one of the accelerator’s directors] came in and said there was someone I had to meet.”

That person was Kyle Wang, who just started a PhD in U of T's department of molecular genetics and has a background in pharmacology and biochemistry. He, too, was looking at finding “actionable” ways to use people’s genetic data but was focused on the thorny issue of preventing adverse drug reactions.

The two decided that Wang’s was the better business opportunity. By 2020, the market for personalized and precision medicine is expected to be worth US$1.6 billion in North America and US$3.8 billion worldwide, according to Wang. His research shows that adverse drug reactions cost the Canadian health-care system between $35 million and $50 million annually, while contributing to a quarter of all hospitalizations, he says.

So a partnership was forged and a startup – Omgen – was created.

“It’s a very real problem, and we know it can be solved in the way we have proposed,” says Wang, who first incorporated the company a few months ago.

“There’s a lot of studies that show extreme reductions in side effects when you consider genetics in the treatment.”

The experience of Jarosz and Wang highlights the speed at which U of T’s growing network of 10 entrepreneurship hubs are turning research-minded students and faculty members into budding builders of businesses.

In the case of Techno, participants receive five days of intensive training. They learn how to devise business models, identify potential competitors, conduct market research and seek patent protection. The week is capped off by an investor-style pitch session – which Jarosz expertly delivered on behalf of Omgen before a crowd of about 100 people.

Other startups that participated in the Techno pitch day included: Just Vertical, which sells vertical plant growing systems for urban farmers; FociDR, which has developed new camera software to help surgeons better navigate the body; and Biohin, which is developing a microbe-based system to turn greenhouse gas into rocks.

Of course, Techno is far from the only place where entrepreneurs are being trained at U of T during the steamy summer months.

The Entrepreneurship Hatchery at U of T's Faculty of Applied Science & Engineering also takes advantage of the academic lull between June and September to help as many as three dozen teams turn their research into businesses. Its four-month-long Nest program, from May to August, includes one-on-one mentorships, summer fellowships, space to work and access to a prototype fund, according to the accelerator’s website.

The teams work toward a Demo Day in September, when ideas are pitched before a panel of judges in an attempt to attract seed money. The big winner at last year’s event was TrexoRobotics, which makes an exoskeleton to help disabled children walk.

“The focus in the Hatchery is the development of the business model,” says Mariam Karim, the accelerator’s operations director.

Summer is also a busy time at UTEST, which is run by U of T’s Innovation and Partnerships Office and MaRS Innovation. The 12-month program, which kicks off in late June, focuses on turning U of T research into successful startup companies and stipulates that participants must be either U of T students, faculty or recent alumni.

The Department of Computer Science Innovation Lab (DCSIL), meanwhile, runs a spring cohort and is planning to host a hackathon in late July in partnership with smart lighting company Nanoleaf, which was started by U of T engineering alumni Gimmy Chu, Christian Yan and Tom Rodinger. The goal: “Design and code plug-ins for the upcoming Nanoleaf Aurora Rhythm,” a modular smart lighting panel that can be synced to music.

Back at the Impact Centre, Jarosz is concentrating on finishing up her master's before she decides whether to continue with Wang and Omgen.

“We have all these drugs on the market,” she says. “But we need tools to help health-care providers decide which care is best for their patients.”