So, you're graduating? Here are five things you should know about U of T’s convocation traditions 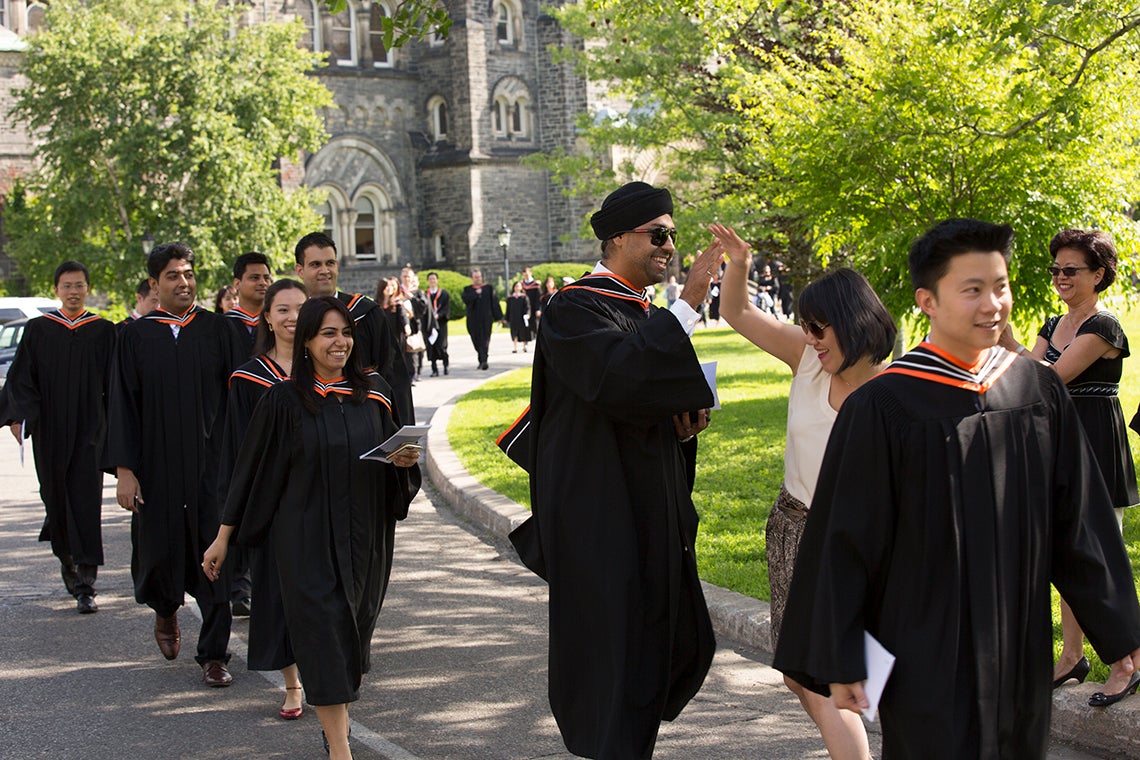 When University of Toronto students conferred their degrees under Convocation Hall’s domed roof, they become part of a tradition spanning over a century.

The hall, built in 1907 thanks to fundraising by alumni and government support, will be the venue for 32 ceremonies this spring, connecting graduates past and present. As graduation day nears for the Class of 2019, U of T News takes a look at a few things that make U of T’s convocation unique.

When “Con Hall” first opened, the 1,700-seat building must have seemed spacious. But expanding enrolment led the university in 2018 to explore moving the ceremonies to a larger venue, such as Varsity Stadium or the Rogers Centre. This spring alone, over 12,400 graduates and more than 34,000 guests are expected to come through Con Hall’s doors.

After hearing from students, alumni, faculty and staff, however, a committee recommended in March to continue using the hall for all ceremonies because there was a strong sense of pride associated with the traditional venue.

Convocation Hall isn’t the only place on campus where new graduates are celebrated each spring. U of T’s First Nations House recognizes Indigenous students who reach a milestone in their studies – whether they’re about to graduate with an undergraduate or graduate degree, or if they’ve completed a bridging program to begin university.

And, for the third year running, U of T’s Black Students' Association is planning to host a tri-campus graduation event for Black students. In a first for the association, the awards ceremony will be held at U of T Mississauga.

Darling and Pearson, the preeminent Toronto architecture firm of its time, chose the elements of the design for Convocation Hall carefully, modeling it after the Sorbonne amphitheatre in Paris. Frank Darling, who had studied and trained in England, “was fluent in many architectural styles,” writes Professor Emeritus of architecture Larry Richards in University of Toronto: The Campus Guide. Con Hall was designed in the beaux arts style and features a magnificent glass dome, currently under renovation. “Considering its size, the hall has a remarkably intimate feel,” Richards says.

Before graduates flip the page to a new chapter of their lives, many will receive parting advice from either a special convocation speaker – including former Ontario cabinet minister Zanana Akande and businessman and philanthropist Leslie Dan, both alumni – or an honorary degree recipient. Among the people who will receive honorary degrees from U of T this spring: Mark Tewksbury, the Olympic swimmer and gold medallist; Buffy Sainte-Marie, the Cree singer-songwriter and activist; and alumna Setsuko Thurlow, a Hiroshima survivor and advocate for nuclear disarmament.

The traditions behind graduation regalia go back to the medieval ages. At U of T, there are at least 91 different hoods, which indicate the degree granted and field of study. One of the weightiest symbols at convocation, however, is the mace. The bedel (official mace holder) carries the gold-plated silver mace into the hall to begin the ceremony.

A gift from Lt.-Col. William Eric Phillips, chair of the then Board of Governors from 1945 to 1964, the mace was unveiled at the June 1951 convocation. Its ornaments speak to the university’s traditions and history. Each strap is decorated with the maple leaf and the trillium, while the mace’s four panels bear the following designs: the cypher used by George IV (who granted the university its original charter in 1827), the arms of the university, the arms of the province of Ontario and the arms of Canada.