After careful review, Convocation Hall will continue as venue for graduation ceremonies 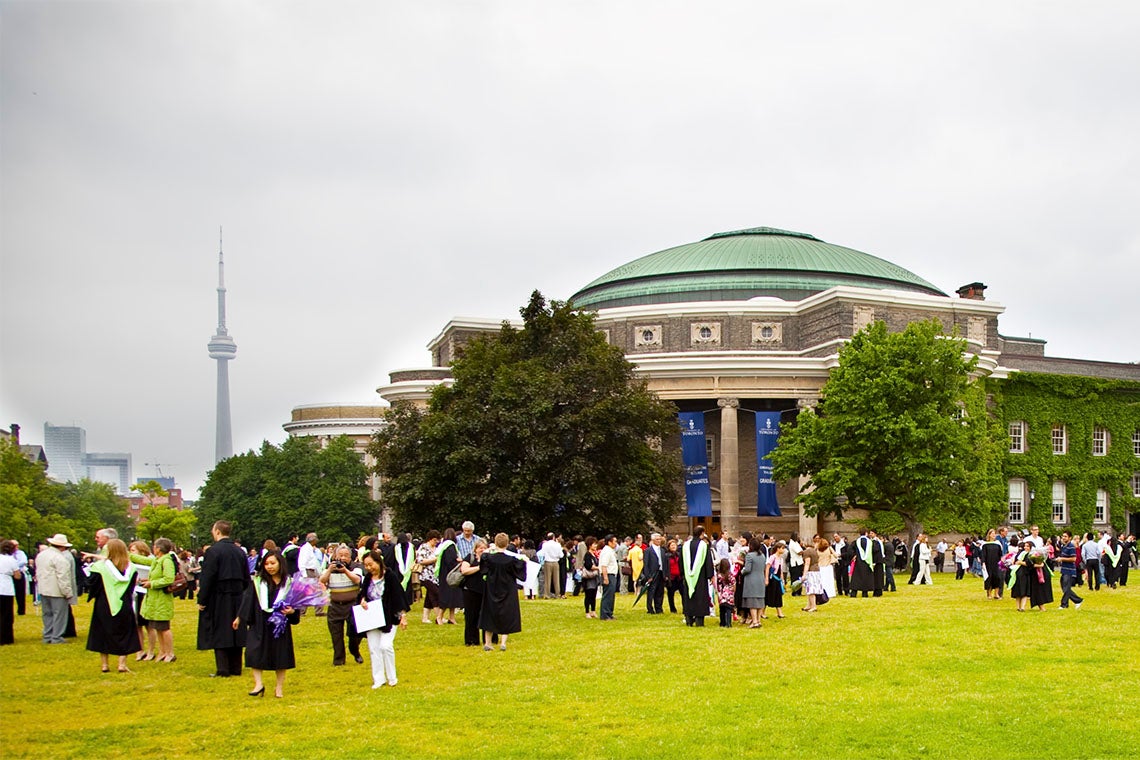 “The committee heard from a large number of people, in strong terms, that Convocation Hall plays a fundamental role in the U of T experience,” said U of T President Meric Gertler. “We agree – that tradition must continue”

Convocation Hall is home to one of the most important rites of passage at the University of Toronto – and the tradition spanning generations should continue, despite concerns about the tightness of the space due to increasing enrolment. That was the conclusion of an advisory committee reviewing convocation and whether it needed a change of venue to accommodate a growing number of students.

As enrolment and graduating classes have grown, the university has had to increase the number of ceremonies. In 2018, there were 37 convocation ceremonies – 29 ceremonies in the spring taking place over 11 days and eight in the fall over four days. Just over a decade earlier, in 2006, there was a total of 26.

A year ago, the president and the chair of the Governing Council struck the Convocation Advisory Review Committee (CARC) to undertake a review of convocation. Its conclusion after extensive consultation and research: keep convocation ceremonies right where they are.

“The committee heard from a large number of people, in strong terms, that Convocation Hall plays a fundamental role in the U of T experience,” said U of T President Meric Gertler.

“We agree – that tradition must continue.”

Sheree Drummond, secretary of the Governing Council and CARC co-chair, said the committee consulted broadly with the U of T community.

“The preference for continuing at Convocation Hall was clear across all stakeholders,” she said.

Though the venue will stay the same, there will be some changes to the ceremonies beginning as soon as this spring – which will include more tightly controlling the length of each ceremony by, for example, limiting the number of speakers and finding more opportunities for senior members of the administration to take on formal roles in the proceedings.

As well, the committee has made recommendations for improving accessibility and further consultations will take place with regard to adding Indigenous elements to the ceremonies.

On behalf of the committee, co-chairs Drummond and Bryn MacPherson, assistant vice-president, Office of the President and chief of protocol, met one-on-one with principals and deans to seek their feedback.  In addition, the CARC surveyed 2018 spring and fall graduating classes to better understand what they value in convocation and how to improve the experience. They also surveyed all alumni with active email addresses, and invited members of the university community, including student government leaders, to submit comments.

U of T will continue to encourage the use of the Convocation Plaza, a celebration space situated adjacent to Convocation Hall that can function as an overflow facility.

“We also want to consider ways we might possibly formalize the alternative viewing spaces for additional guests,” said MacPherson.

The committee also looked at how other academic institutions addressed this issue.

“When we started this exercise, one of the options on the table was the potential of moving off-campus to a large external venue as some U.S. and U.K. universities have done,” said MacPherson.

The committee considered the feasibility of the Rogers Centre, and other large external venues in Toronto but, in the end, the committee found that stakeholders really felt a strong connection to Convocation Hall and the campus.

“When graduates and guests exit their convocation ceremony, they are not just on a sidewalk in downtown Toronto, but on King’s College Circle at the heart of the university,” said MacPherson. “The U of T community really felt a deep attachment and connection to the whole experience.”

Read the Convocation Review and the Administrative Response