For Convocation Hall, a renovation without disruption 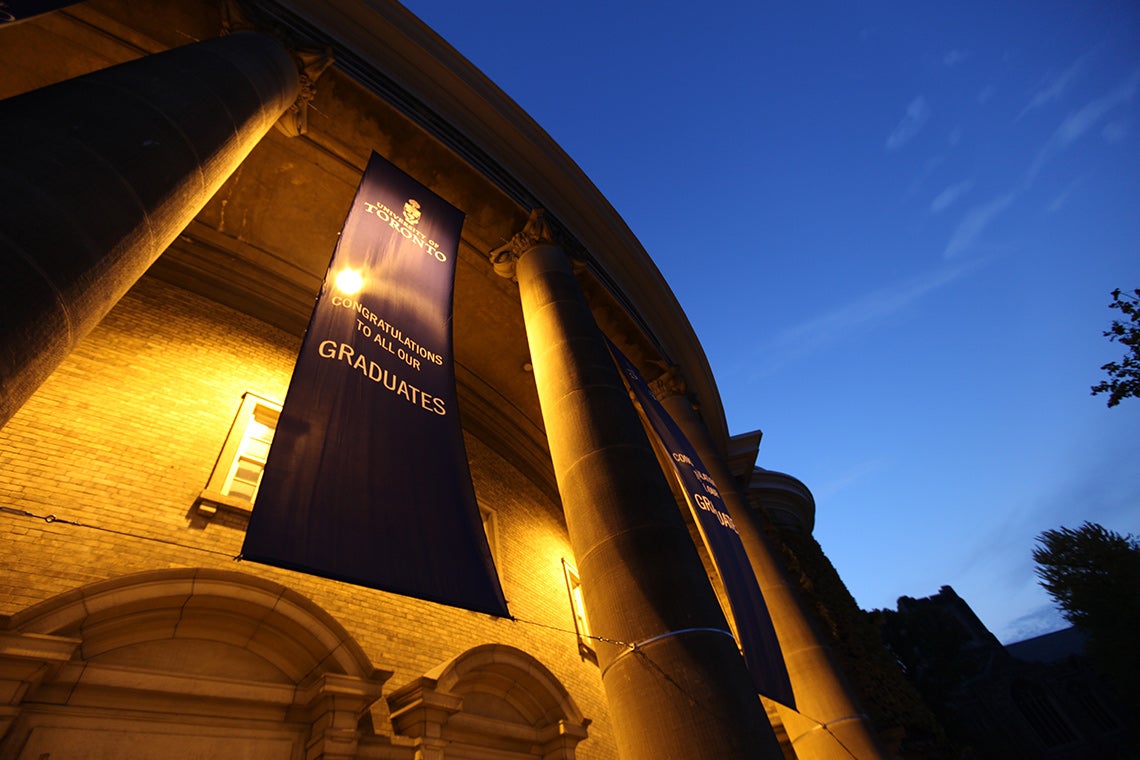 U of T had to get creative so that the necessary repairs and renovations in Convocation Hall could be done without disrupting classes, convocation and other events (photo by Makeda Marc-Ali)

Updating a building that is more than a century old is no easy task, but it becomes even more complicated when the building is as busy as Convocation Hall.

It serves as the University of Toronto’s largest classroom, with space for 1,730 students. In the spring and fall, the hall is where U of T graduates go to receive their degrees, and it doubles as a venue for events of all kinds. If the walls could talk, they would tell of citizenship ceremonies, lectures by Jane Goodall and Stephen Hawking, and a Bob Marley concert in 1976.

The university took special steps to address the unique challenges of undertaking repairs and bringing the 113-year-old structure up to code. The greatest difficulty was to do all the work without disturbing classes or last year's spring convocation, the largest in the country with more than 14,000 students and 29 different ceremonies.

“The traditions centred in Convocation Hall have worked for over a century,” says Adrienne De Francesco, executive director of U of T's capital projects group. “We had to find a way to do the renovations without disrupting classes or depriving graduating students of a U of T experience shared between generations.” 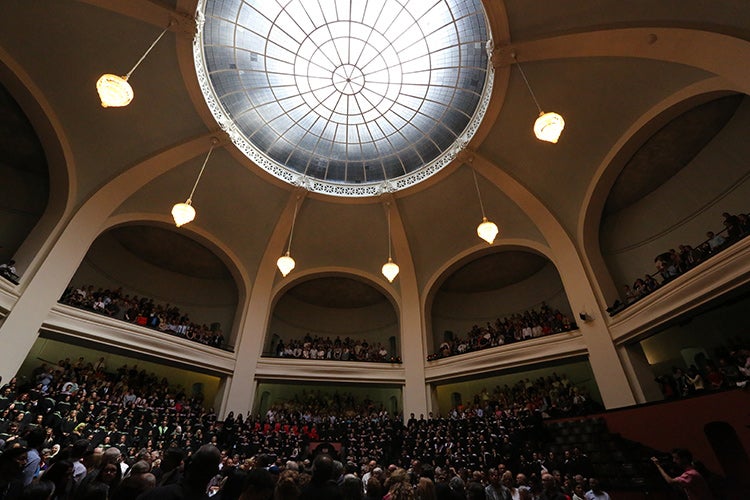 That meant getting creative. Construction contractors would need to access the skylight, or oculus, check each glass panel and make replacements if necessary. The solution, as directed by the university's capital projects group, was building a steel platform with concrete footings in the basement, 60 feet high and 55 feet across, so that workers could work on the glass in evening, when the hall wasn't in use.

The team, which included the contractor Harbridge + Cross Limited and design engineers Read Jones Christofferson Ltd., had just a five-week window between the end of classes last May and convocation in June to erect the platform, says Michael Cicerani, a senior project manager in U of T's university capital projects group.

Despite the platform’s size, it blends in.

“After last convocation in June, we asked a couple of students who were in here, 'What did you think of the platform?' All of them said, 'What platform?'” Cicerani says.

One of the challenges ahead will be to find tradespeople who have the necessary expertise to assess and repair the old glass in the skylight. “There aren't many people who can do this kind of stuff,” Cicerani says. 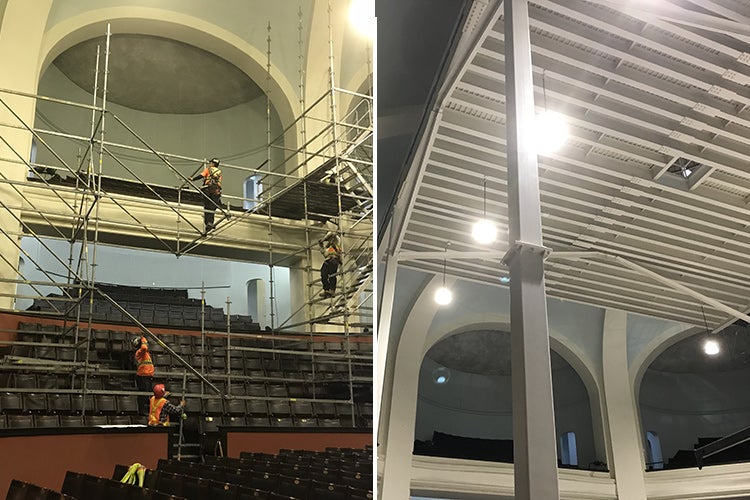 Before any work could be done in the hall, precautions had to be taken to protect the pipe organ from dust and debris. The Casavant organ is used at every convocation. U of T's Academic and Campus Events put the capital projects group in touch with an organ specialist.

Another complication was that engineers and builders had to refer to dated blueprints for the building, including the same ones used by architectural firm Darling and Pearson in 1905, who modelled the hall after the Sorbonne Theatre in Paris. The construction company had to adjust its plans unexpectedly when they discovered a wall that wasn't in the original plans.

“That's part of the complexity of dealing with buildings that have so much history and that have gone through a lifecycle of their own,” Cicerani says.

In addition to working on the dome, the design called for alterations to the stage to make it more accessible. The contractor worked under a tight timeline, dealing with old and brittle concrete. Ramps were added to either side of the stage and the floor was lowered so that the slope would not be too steep for wheelchair users.

The ramp was used for the first time in the fall convocation ceremonies.

“It just takes one student using it to make all the work worthwhile,” says Cicerani.

Paul Babiak, the head marshal at convocation who has led student processions for almost 15 years, says the ramps help fulfil the goals of convocation. “The goal is equality and by making things more accessible it shows that there's nothing out of the ordinary about being in a wheelchair or needing any other kind of guidance or assistance,” he said.

He commended the designers and contractor for finding a way to keep the hall in service for convocation, keeping the tradition alive. “We're walking through the same space that students have walked through for over 100 years,” he says. “This is a crucial part of the sense of presence we're creating, which connects U of T grads past and present.”