A sanctuary for startups: How an aging church became home to some of U of T's newest ventures 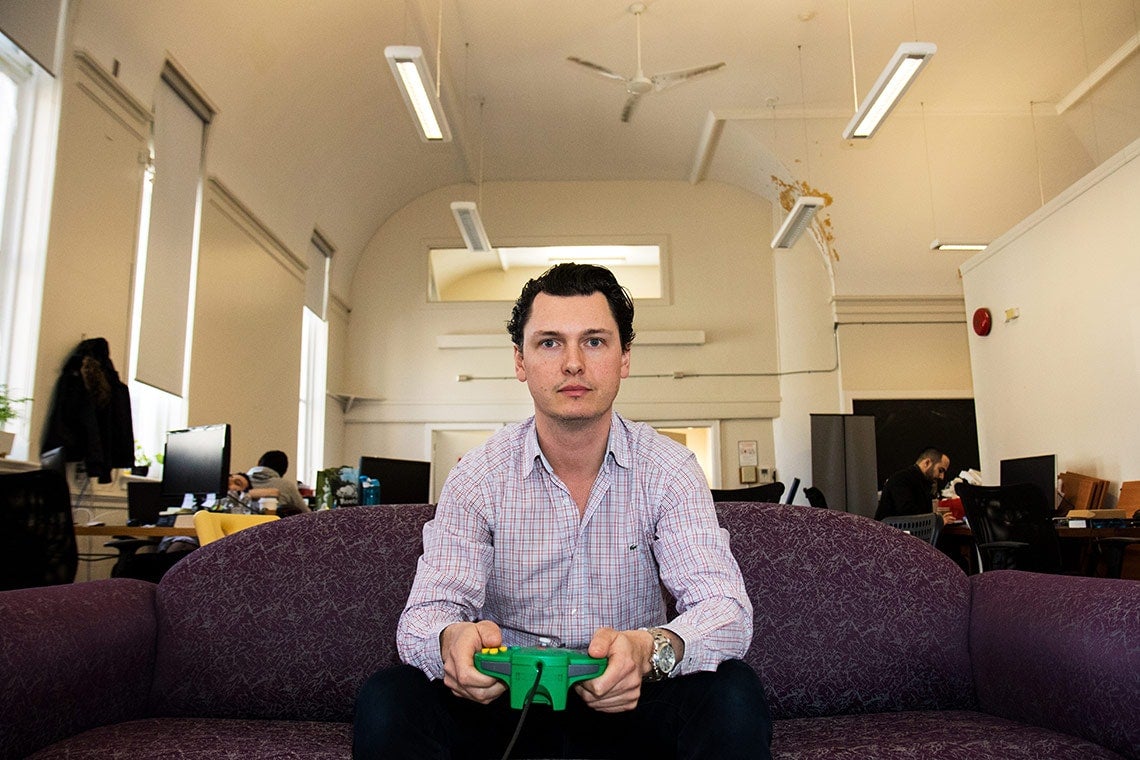 Kurtis Scissons, UTEST's co-director, sits in the lounge area of UTEST's second-floor space inside a deconsecrated church owned by the University of Toronto (photo by Chris Sorensen)

The wooden stairs creak, the third-floor meeting room feels like a sauna and there’s nary an espresso bar in sight.

But what the unassuming home of the University of Toronto’s UTEST accelerator – housed on the second floor of a 136-year-old church on College Street – lacks in swish startup amenities, it more than makes up for in creative energy as U of T entrepreneurs work beneath soaring 20-foot ceilings to build the businesses of tomorrow.

Think of it as the U of T version of the Los Altos, Calif. garage where Steve Jobs and Steve Wozniak famously launched Apple Computers – a garage that, incidentally, was designated a historic property in 2013.

“You can bring your bike in, leave your stuff and your computer monitor will still be there in the morning,” says UTEST co-director Kurtis Scissons about the former Zion Congregational Church.

“It’s a dedicated space for these companies.”

One of nine U of T entrepreneurship hubs, UTEST is an offshoot of the university’s Innovations & Partnerships Office and is itself a partnership with MaRS Innovations. The accelerator, which is accepting applications for its next cohort until May 25, has supported more than 60 companies – including artificial intelligence-powered firms like Blue J Legal and Deep Genomics – and has generated in excess of $75 million in investments since its establishment six years ago. UTEST initially sought temporary space inside the 136-year-old church owned by U of T, but the building has proved popular with several of its startups (photo by Chris Sorensen)

UTEST’s repurposing of the church space is both an example of how U of T is finding innovative uses for historical buildings and the flexibility of the expansive network of entrepreneurship support infrastructure on U of T’s downtown Toronto campus.

Scissons, for example, says it’s common for UTEST startups to work in the church and then run next door to ONRamp, a co-working space for startups at U of T that opened last fall, to meet potential clients or investors. The educational component of UTEST’s programming, meanwhile, takes place across the street at the MaRS Discovery District.

“Most of the founders are still tied to the university and they want access to MaRS and ONRamp is right there,” Scissons says. “Plus it’s downtown and on the subway line – and it’s free. It ticks a lot of boxes.”

The deconsecrated church was initially intended to be a temporary home for UTEST startups while the accelerator’s previous digs in the next door Banting building were undergoing renovation. However, Scissions says some of UTEST’s companies were reluctant to say good-bye to the church’s unique charms. They include: a relative degree of privacy, ample room to store gear, and a small lounge area anchored by a jaunty purple sofa, flat panel TV and video game controllers. “You can bring your bike in, leave your stuff and your computer monitor will still be there in the morning,” Scissons says (photo by Chris Sorensen)

The building has evolved to serve the needs of a particular breed of UTEST startup: too big – or with too much equipment – to work comfortably in a shared workspace, but too small to justify spending thousands of dollars a month to rent a downtown Toronto office.

“Sometimes it’s better to put your money toward building a company and a product,” says Scissons, who previously worked for tech giants like Oracle and Nortel Networks.

One of the UTEST startups that calls the church home is LegUp Computing. The company’s co-founders – Andrew Canis, Jongsok Choi and Ruolong Lian – are developing a cloud-based platform that allows software developers to program a complex, but powerful piece of hardware called a field-programmable gate array (FPGA). LegUp recently closed a seed round of funding that was led by Intel Capital.

“We’re constantly running computations on these computers so it’s really not possible to just unplug them and put them away,” says Canis, LegUp’s CEO, as he motions to three desktops equipped with dual monitors that are crammed into a tiny office space. Appulse Power is another tenant. The startup, recently acquired by an Australian multinational, designs integrated circuits – its UTEST office is festooned with electronics gear – that allow devices like smartphones and tablets to charge faster and consume less power while also trimming the size of chargers and adapters.

UTEST’s long-term plan is eventually to move into a planned U of T innovation complex, according to Scissons. In the meantime, there’s something poetic about an old church providing shelter to some of Canada's newest and most dynamic companies.

“I know there’s a really big push right now for working remotely, but I think the most meaningful work often gets done when you’re in the same physical space with your team,” says Fisch, who recently inked a deal to raise $500,000 in seed capital from investors.

“I really don’t think we would be as far along as we are without U of T’s support – and that includes having our own office space.”