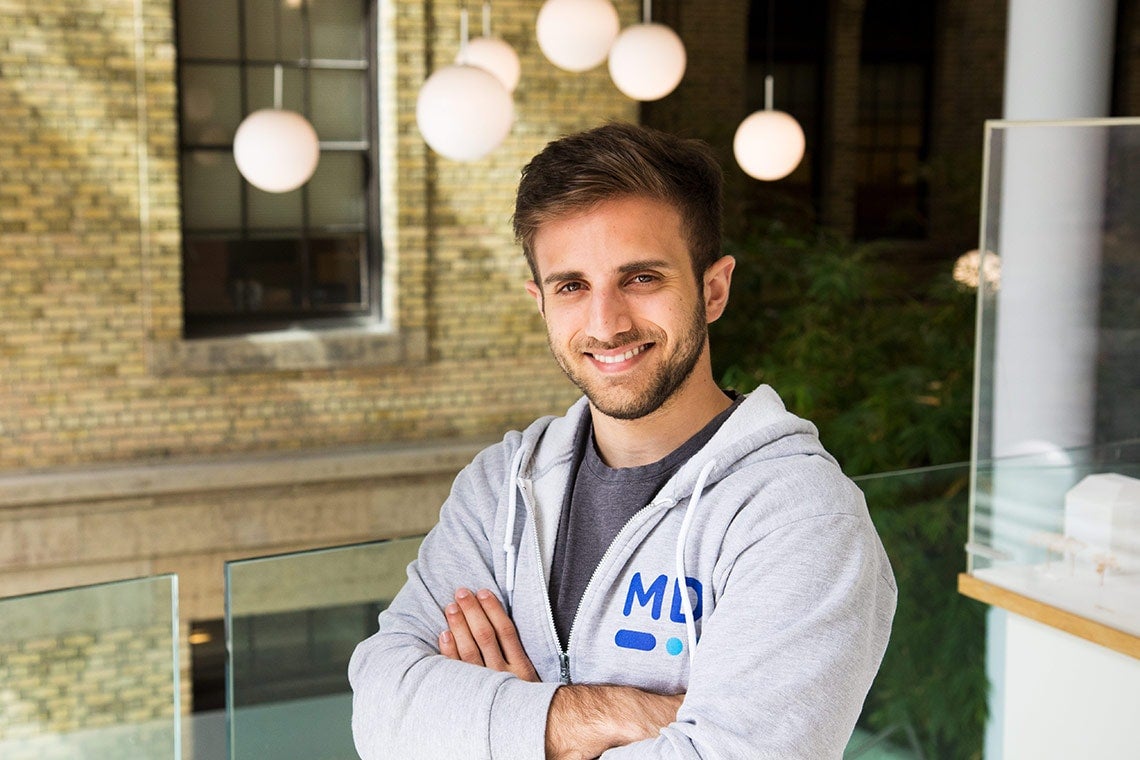 The idea behind Zack Fisch’s health-care startup, which recently closed a $500,000 seed round, was planted after he nearly lost a leg following an ultimate Frisbee accident.

Though the limb was merely broken, Fisch failed to recognize his too-tight cast had led to compartment syndrome, dangerously decreasing blood flow.

“I felt a burning sensation, but figured it must just be normal,” Fisch says, blaming the groggy, medicated state in which he received the hospital’s aftercare instructions.

The experience got Fisch, who studied law and business at York University, thinking about better ways of delivering patient information. So he founded Dash MD three years ago with Cory Blumenfeld, a master’s student at University of Toronto, and built the startup with the help of U of T’s UTEST accelerator, one of nine entrepreneurship hubs on campus.

The startup’s “mobile personal health manager” is designed to be downloaded for free by patients and populated with information by hospitals and health-care providers – a key difference between Dash MD and other health-care apps.

In the case of his broken leg, Fisch says the app could have provided text, video or audio information about fracture care, scheduling pain medications and physiotherapy exercises. Similarly, an expectant mother could use the app to register with a hospital and then keep track of medical appointments, medications and educational material before – and then after – childbirth.

So far, Dash MD has partnerships in place with 30 Canadian hospitals, and the app itself is now live in nine hosptials in Ontario. The startup offers three tiers of service to health-care providers: a “freemium” version that comes with health care-oriented ads, a premium version without ads and a white label version branded with the institution's name.

Dash MD recently closed a $500,000 seed round of funding that will be used to fund expansion in Canada and the United States, where it operates under the name Scout MD. The startup’s current investors include the Niagara Angel Network, Peterborough Regional Angel Network, Niagara Business & Innovation Fund and Ontario Centres of Excellence. It also includes third-party angel investment from Peter Jennings, the co-founder of VisiCalc, the first spreadsheet software for home computers.

“We haven’t just raised money from a single group of investors in Ontario,” Fisch notes. “We’ve raised from across the province, which speaks to the widespread acknowledgement there’s a need for improvement in our health-care system.”

Yet another sign of the potential demand for Dash MD’s approach: The company is set to announce a partnership with the Waterloo Wellington Local Health Integration Network later this month.

"This is a government organization that we will be working with to serve hundreds of thousands of patients in a geographic area, which, again, validates the need for what we’re doing,” Fisch says.

Fisch adds that Dash MD benefited immensely from its association with U of T, which has a world-class reputation for health research and close connections to partner hospitals.

“It gave us credibility before we had signed up a large number of health-care providers,” Fisch says. “That helped us get our foot in the door and begin having conversations to find out what their needs were.

“We wouldn’t be where we are as a company without that support.”