It's time to capitalize on Toronto's early lead in artificial intelligence: U of T experts 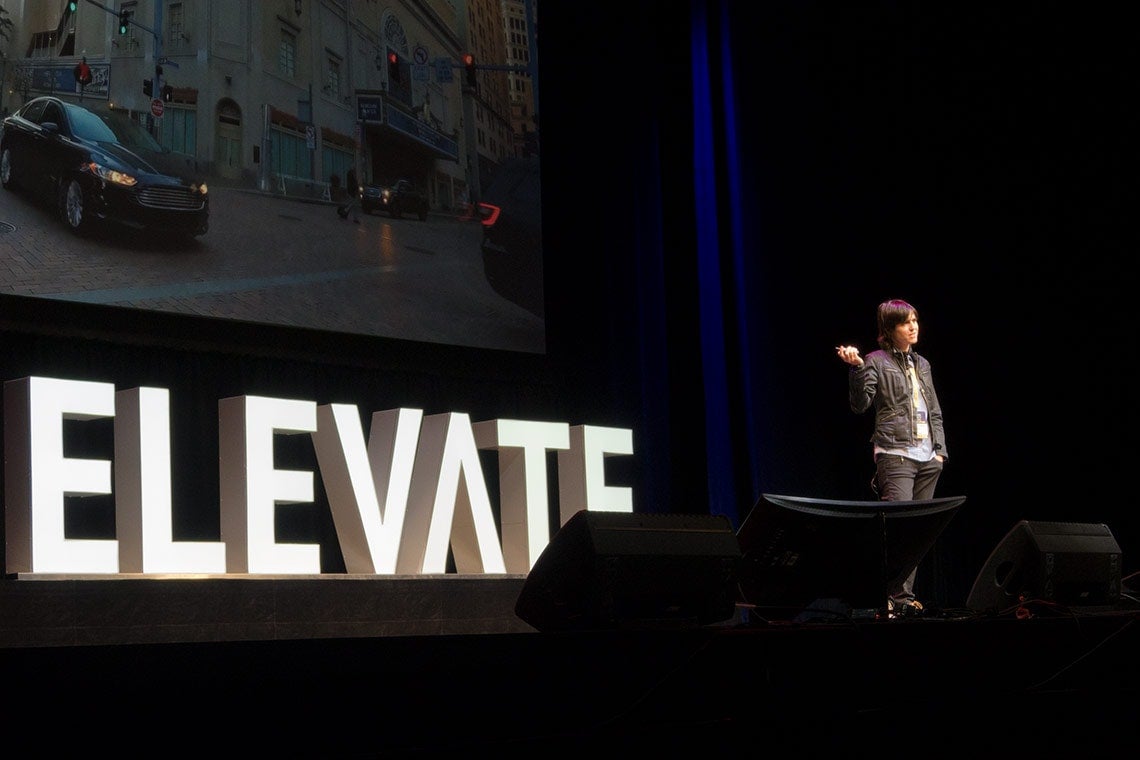 Raquel Urtasun, an associate professor of computer science at U of T, discusses her work at Uber's self-driving car lab at the Elevate Toronto conference (photo by Chris Sorensen)

Thanks in part to research at the University of Toronto, Canada has emerged as an early leader in the artificial intelligence revolution – but truly reaping its rewards will require political vision, an ongoing commitment to diversity and an appetite for winning that, outside of hockey, is rather un-Canadian.

That was one of the themes that emerged from this week’s Elevate Toronto festival, a three-day event that was designed to showcase the city and surrounding region’s growing clout in technology and innovation.

Raquel Urtasun, a U of T associate professor of computer science and a star in the AI field, used her time on the main stage at the Sony Centre for the Performing Arts to explain why she decided to make Toronto home – and, more importantly, why she resisted the temptation to relocate when Silicon Valley came calling.

“Toronto was and is at the forefront of AI,” said Urtasun, who is now the head of ride-sharing giant Uber’s new self-driving car lab in Toronto.

“The machine learning group, for example, at the University of Toronto is one of the best groups in the world.”

Originally from Spain, Urtasun added that Toronto’s reputation as a diverse, cosmopolitan city was also a major draw. “This is something that was really important for me.”

Researchers and government officials are hoping the combination of AI research expertise, generated by world class universities like U of T, and Canada’s welcoming immigration system will help position the country to take advantage of a technology that is poised to forever change industries that range from law and finance to transportation and health care.

To that end, the federal and Ontario governments earlier this year partnered with U of T and industry to launch the Vector Institute for artificial intelligence research, to help train and retain top researchers in the field. At the same time, Toronto is witnessing the development of a significant ecosystem to help commercialize that research. U of T, for one, boasts several entrepreneurship hubs on campus, including the Department of Computer Science Innovation Lab (DCSIL) and the Creative Destruction Lab (CDL) at the Rotman School of Management – both of which have a heavy focus on AI-powered startups.

Urtasun, who is one of Vector’s co-founders, highlighted her work with Uber during her talk. She detailed the significant AI challenges associated with developing self-driving cars, a category of transportation she said promises to dramatically reduce accidents and congestion – providing that it’s implemented alongside public transit solutions.

Several of Urtasun’s U of T colleagues continued the conversation the following day at a sold-out, AI-focused event at the MaRS Discovery District.

Sanja Fidler, an assistant professor in the department of mathematical and computational sciences at U of T Mississauga, told attendees about her work developing computer vision so AI-powered robots can better understand and interact with the world around them. “We need to train machines to act friendly and natural,” she said. Sanja Fidler, an assistant professor of computer science at U of T, discusses her computer vision research at Elevate Toronto's AI event (photo by Chris Sorensen)

Similarly, Inmar Givoni, who has a PhD in machine learning from U of T and is the director of machine learning at Toronto startup Kindred.ai, talked about the company’s efforts to instil human-like intelligence in machines. Like others in attendance, she dismissed recent warnings from the likes of Elon Musk about the threat of AI running amuck and endangering humanity.

“As long as we task those robots with doing things that are meaningful and purposeful, I think it’s going to be a better world,” Givoni said.

The day kicked off with a presentation by U of T University Professor Emeritus Geoffrey Hinton, who has been dubbed the “godfather” of deep learning, a branch of AI that seeks to replicate how the human brain learns. Hinton, who is also an engineering fellow at Google, recounted the bleak years, known as the “AI winter,” when many thought he and a handful of like-minded researchers, including the Université de Montréal’s Yoshua Bengio, who also delivered a presentation, were a bunch of misfits wasting their time on an irrelevant field. Nobody thinks that anymore.

The race is on to be the first to exploit the technologies Hinton and others pioneered. Tech giants like Apple, Facebook and Google have all hired leading academics in the field. AI-powered startups are being founded at breakneck pace. And China has announced plans to be a global leader in AI by 2030.

All of which begs the question: Is Canada doing enough to establish itself as an AI superpower?

“Toronto has a really nice combination of a nice place to live and a [tech] community on the rise,” said Steve Irvine, who recently left an executive position at Facebook’s Menlo Park, Calif. headquarters to return to Canada and launch Integrate.ai, which helps companies boost customer engagement.

However, Irvine told a panel discussion that succeeding in the AI space required more than just turning ground-breaking research at U of T and elsewhere into a few hundred startups. He said the goal should also be the creation of “10 big companies.”

Dan Debow, a founding partner of CDL and an angel investor, echoed Irvine’s comments. Then he laid out a plan “to win” in AI. It involved focusing public investments in the field, attracting talent from around the world and rethinking protectionist policies that, he argues, result in less competitive – and therefore less innovative – industries.

Making Canada an AI superpower won’t happen overnight – if it happens at all, Debow warned. He cautioned that it was likely a 30-year project, albeit one that could pay massive dividends down the road.

Good thing, then, that several of AI’s current luminaries are accustomed to tough slogs – whether it’s Hinton toiling away for years in an unloved field or the challenges Urtasun faced establishing herself in tech’s male-dominated culture.

“What was important for me was to never give up,” Urtasun said during her presentation. “I was always trying to say, ‘If you think I’m not worth it, I’m going to show you that I am.'”