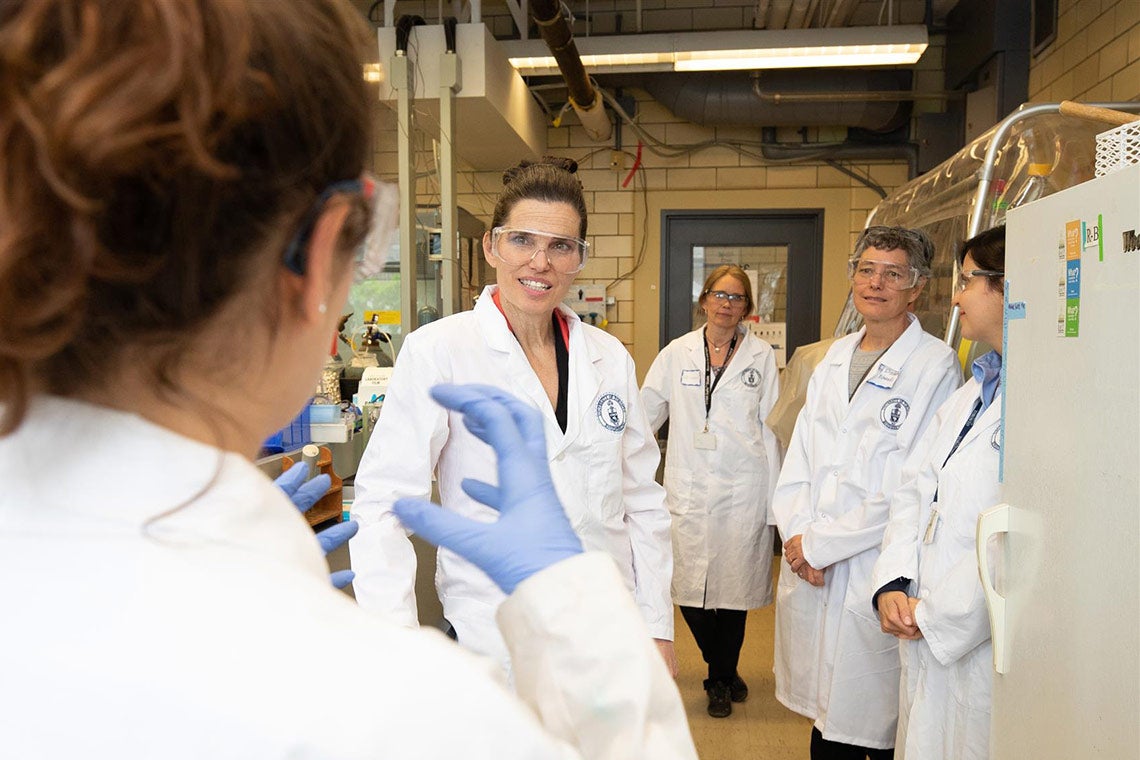 Kirsty Duncan, the federal minister of science, visits the lab of Elizabeth Edwards, a professor in U of T's department of chemical engineering and applied chemistry (photo by Laura Pedersen)

When Kirsty Duncan, Canada’s federal science minister, wants to illustrate the importance of fundamental science – research driven by human curiosity, not potential outcomes – she often reaches for the example of deep learning.

The branch of artificial intelligence, which attempts to mimic the way the human brain learns, was pioneered by University of Toronto researcher Geoffrey Hinton and others and is now widely viewed as a potentially revolutionary technology that could transform Toronto – and Canada – into a global innovation hub.

But if it weren’t for public funding of University Professor Hinton’s research decades ago, when he toiled in obscurity on a field of inquiry many considered crazy, the breakthrough may well have happened somewhere else – or perhaps not all.

“There’s a lesson here: it’s investments in discovery research over decades,” Duncan said in an interview during a visit to U of T’s campus this week, noting the federal government last year invested $125 million in a Canada-wide artificial intelligence strategy to capitalize on its early lead.

“We built the talent and now everything exists – but it all starts with discovery research.”

Yet, as a former researcher herself, Duncan was acutely aware that Canada’s research apparatus had suffered over the decades as budgets were cut and scientists muzzled. So, after being sworn into cabinet, she commissioned a blue-ribbon panel led by Dr. David Naylor, president emeritus of U of T, to review the federal government’s support of fundamental science in Canada.

“That’s something that had never happened in our country before,” said Duncan, who is also minister of sport and persons with disabilities. “It had been 40 years since someone had looked at the whole ecosystem. What system goes un-reviewed in 40 years?”

The final report, issued last year, found per capita federal investment in fundamental science had indeed slumped in recent decades and recommended a set of sweeping changes – many of which were adopted in whole or in part by the federal government.

In the most recent budget, for example, Ottawa earmarked $925 million in new funding for fundamental research that will be handed out through Canada’s three federal research councils over the next five years. Another $275 million was earmarked for a new tri-council fund that will support “international, interdisciplinary, fast-breaking and higher-risk” research and $21 million to increase diversity in science. Duncan called it “the largest investment in research in our country’s history.”

She also emphasized the importance of the government’s decision to provide stable funding for the Canada Foundation for Innovation, which supports scientific research infrastructure.

Taken together, Duncan said the government’s investments have helped restore Canada’s reputation as a research powerhouse and are paving the way for future breakthroughs in everything from disease cures to green technologies. However, she added it's critical for researchers at institutions like U of T to “keep telling their stories” in order to remind Canadians why their work is important.

“My goal,” Duncan said, “is to return research to its rightful place, ensure we support our hard-working researchers and evidenced-based decision making, and to embed science and research in government so it can never be dismantled again.”