Vivek Goel to step down as U of T’s vice-president, research and innovation, and strategic initiatives 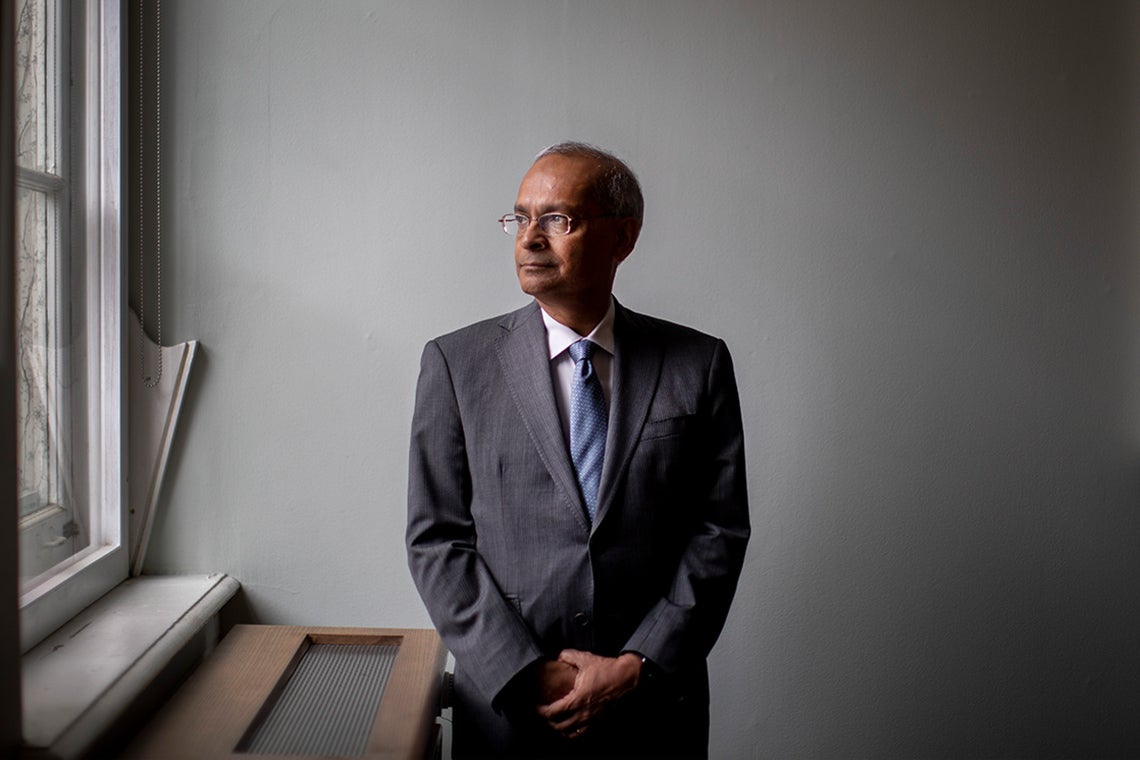 Vivek Goel, who led U of T's extensive research operation for the last six years, will take on a new role as a special adviser to U of T’s president and provost, helping to guide the university’s COVID-19 planning efforts (photo by Nick Iwanyshyn)

After leading the University of Toronto’s extensive research operation for the last six years, Vivek Goel is stepping down as vice-president, research and innovation, and strategic initiatives so he can devote more time to guiding the university’s pandemic response, as well as that of the wider community.

Goel, who is among the experts serving on the federal COVID-19 Immunity Task Force, will leave his current position on July 1 and take on a new role as a special adviser to U of T’s president and provost, helping to guide the university’s COVID-19 planning efforts.

He will continue to serve as co-chair of the university’s COVID-19 Incident Leadership Team and lead its recovery and restart activities.

“I’m just trying to do what I think is best for the university and the country, and spend my time where I can focus on big public health issues,” said Goel, a professor at the Dalla Lana School of Public Health.

“If I were a trained forest-fire fighter and there were forest fires burning, and I’m working away at something else, I think I’d probably say at some point: ‘If things are raging out of control, maybe I should go back and do what I was originally trained to do.’”

He added that he hopes to be able to return to his research, including an in-progress study of the impact of a prolonged pandemic shutdown on overall health.

In his time managing a key university portfolio, Goel paved the way for greater multi-disciplinary collaboration, forged closer ties between U of T and industry leaders and oversaw major investments in the university’s research, innovation and entrepreneurship efforts, among other achievements.

More recently, Goel helped spearhead U of T’s response to COVID-19 and shared his public health expertise with a broad audience beyond the U of T community by hosting a regular podcast on the pandemic that explained everything from contact tracing to the process for developing a vaccine – even whether it was safe to go for a run.

U of T President Meric Gertler said Goel’s expert perspective has been sought out by both the public and private sectors.

“As a public health physician, founding President and CEO of Public Health Ontario and faculty member in our Institute of Health Policy, Management & Evaluation at the Dalla Lana School of Public Health, Vivek is uniquely well-qualified to contribute to public health policy and practice at this critically important juncture,” President Gertler said.

“In relinquishing his role as Vice-President, he will have more time and latitude to apply his remarkable expertise and experience to these important discussions, locally, provincially and nationally.”

As vice-president, research and innovation, and strategic initiatives, Goel oversaw implementation of several major U of T projects that cemented the university’s reputation as one of the world’s leading research institutions. They included the creation of the Ted Rogers Centre for Heart Research, which was established thanks to a $130-million gift from the Rogers family in 2014 – then the largest monetary donation ever made to a Canadian health-care initiative – and Medicine by Design, an initiative supported by a $114 million investment from the federal government to undertake transformative research in regenerative medicine.

In the spring of 2019, U of T announced a $100-million gift from philanthropists and business leaders Gerald Schwartz and Heather Reisman to establish a new innovation centre and an institute dedicated to the study of the ethical and societal implications of artificial intelligence and other emerging technologies. The university broke ground on the Schwartz Reisman Innovation Centre last fall.

“Looking back over the past five years, we've had three of these $100-million-dollar-plus types of initiatives,” Goel told U of T News last summer. “They're really where the exciting scholarship is at, and it’s where faculty and students want to be working.”

Other major initiatives Goel helped create were U of T’s School of Cities and, externally, the Vector Institute for Artificial Intelligence.

Goel said another one of his priorities as vice-president was to promote equity, diversity and inclusion in research.

“I think we know there’s still lots of work to be done in society, and the last few weeks have really emphasized that for us,” he said.

Entrepreneurship also blossomed on Goel’s watch. In recent years, U of T has become a North American leader in the creation of  research-based companies – a feat Goel has attributed to students and faculty becoming increasingly engaged with the university’s innovation network. That includes signature events such as U of T’s Entrepreneurship Week and programming by the various incubators and accelerators on all three campuses.

“I think it becomes a self-perpetuating type of process as more and more people get excited about the opportunities,” Goel told U of T News last year. “I think we have been very fortunate that there's been interest from our faculty and students in doing this, and that we have been able to support them with the resources we've created.”

“One of the things I realized as I went through my training and worked as a primary care physician was that you're often getting to people at a very late stage,” he previously told U of T News. “That's what led me to go into public health, which is about preventing disease and working with entire populations.”

He joined U of T in 1991 and stepped into progressively more senior roles, including a four-year stint as vice-president and provost. In 2008, he became the founding president and CEO of Public Health Ontario, which was formed in response to the SARS crisis years earlier. Before returning to his current role he served as chief academic strategist for Coursera.

Beyond the pandemic, President Gertler said Goel will continue to contribute to a number of specific institutional strategic initiatives where he has a particular expertise and interest.

He thanked Goel for his continued service.

“On behalf of the entire University of Toronto, let me thank Vivek for his extraordinary service as Vice-President, and express my sincere appreciation for his willingness to fulfill this important advisory role.”