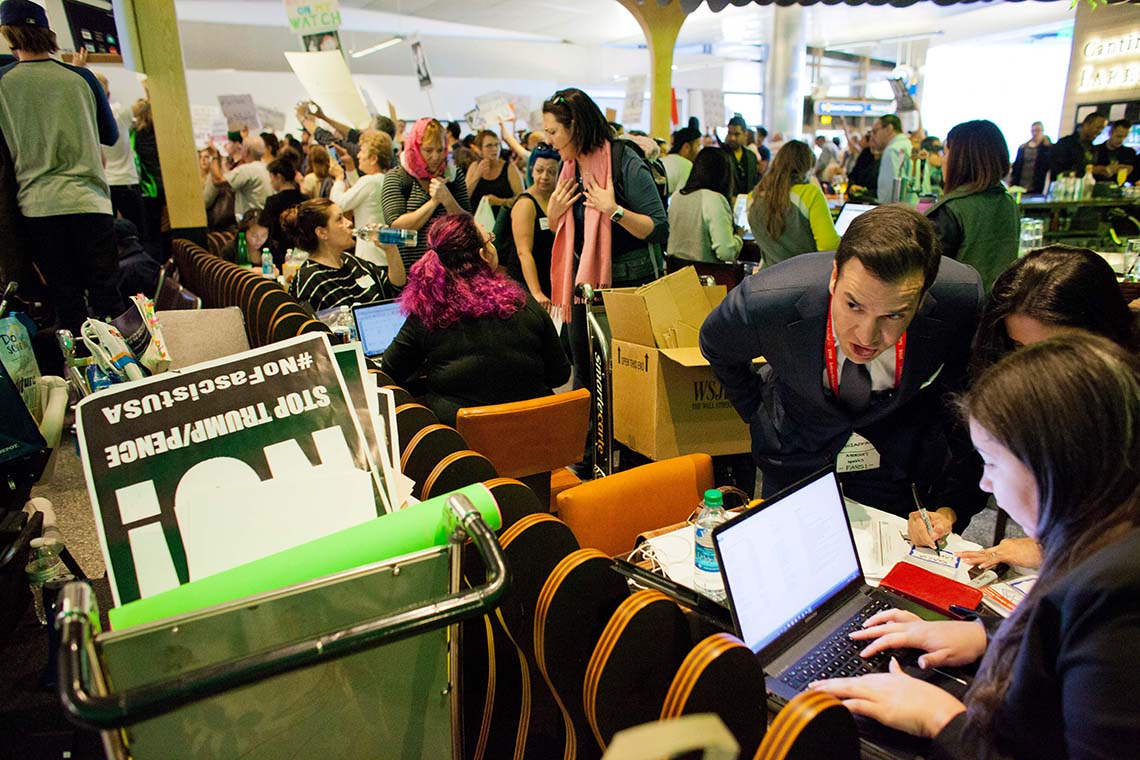 With the world reeling and global markets reacting to U.S. President Donald Trump's new travel ban, University of Toronto faculty and students are tapping into their expertise to find fitting responses.

“At the Faculty of Law, we have a special responsibility to champion the rule of law, ” said Dean Edward Iacobucci. “This week’s seemingly cavalier dismissals of international norms and shared legal understandings by the U.S. President are especially troubling for our community.”

In a statement released Jan. 31, Iacobucci said the Faculty of Law is working on a number of initiatives in response to the ban.

“We have posted on social media and online our willingness to consider late applications from prospective students who may be affected, directly or indirectly, by the travel ban to the U.S.,” he said. “We have also reached out to some Canadian JD students in the U.S. who may wish to transfer to U of T in light of recent events.”

On Feb. 3, the Office of the Provost posted a memo highlighting information and resources for students, faculty and staff  across the university – including examples of ways members of the U of T community could help, such as consideration of late applications for admissions and hosting events at U of T previously scheduled for the U.S.

Read the Globe and Mail story about U of T efforts

Iacobucci said the Faculty of Law had learned of a planned conference at Columbia University in March that was to involve Yemeni scholars now banned from travel to the U.S.

“Out of basic collegiality, and also to offer a concrete manifestation of our rejection of careless, heavy-handed, and intolerant approaches to national security, we have offered to host the workshop at the Faculty and are working with our colleagues at Columbia to see whether this is feasible.”

Individual faculty members and researchers from across the university are also taking a stand. U of T Engineering Professor Peter Robert Herman found himself staging a brief but very personal protest at an academic conference in San Francisco.

Herman's PhD student, Ehsan Alimohammadian, was detained for 14 hours in San Francisco International Airport on the weekend and denied entry to present his research at the conference.

With his student sent back to Canada, Herman presented the research instead, taking a few minutes to express his opposition to the policy.

Read more about the PhD student denied entry to the U.S.

Read the Globe and Mail story about Ehsan 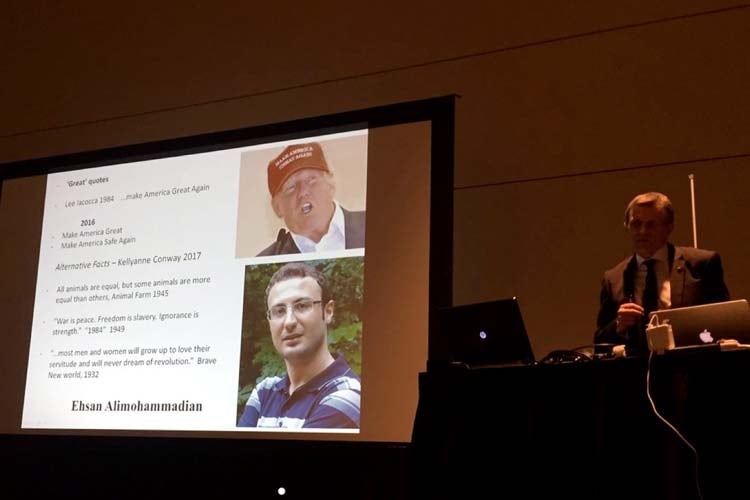 Professor Peter Robert Herman protesting President's Trump's travel ban which led to his PhD student being denied entry to the U.S. to present his research to a conference for SPIE, the international society for optics and photonics (photo courtesy of Peter Robert Herman)

Associate Professor Emily Gilbert, of the departments of geography and planning and Canadian studies in the Faculty of Arts & Science, is an expert in borders, Canada-U.S. relations, immigration and mobility. Gilbert had weighed in on Trump's first week in office – but that was before he signed the executive order for the travel ban.

In an interview with U of T News on Jan. 31, Gilbert said the travel ban is “racial profiling” and she called on Prime Minister Justin Trudeau to take decisive action rather than just “tweeting on the importance of diversity and Canada’s welcome to refugees.”

“We in Canada should be concerned on all kinds of levels,“ Gilbert said. “Not only because many residents and citizens will be subject to these new authoritarian and discriminatory laws, although this is, of course, very important. But because we have become so deeply implicated in border security with the United States, with extensive information-sharing on immigration and visa applicants, refugee-vetting, and entry-exit data at the land border.”

Over the weekend, President Meric Gertler spoke out against the executive order.

“The strength of research and teaching at the University of Toronto has always been based upon our ability to welcome the most talented individuals from around the world, and the freedom of our faculty and students to travel abroad for purposes of scholarship and study," Gertler said. “Actions that impede this would be terribly harmful to our academic community, and to Canadian research and scholarship more broadly.

“The idea of targeting and restricting the travel of individuals on the basis of their nationality or birthplace is antithetical to everything we stand for as an institution and a country.”

Read how U of T is keeping close watch on U.S. travel restrictions

Emerging scholars at the university are also offering analysis, with op-eds calling on Canada to do more.

Both argued that refugees and asylum seekers often provide a crucial source of intelligence on security threats like terrorism and transnational organized crime, and now Trump’s ban among other things “harms information-sharing and undermines the campaign against Daesh in Iraq and Syria. The U.S. has just hamstrung its abilities to gain vital counter-terrorist threat intelligence, and as part of the ‘Five Eyes’ intelligence-sharing partnership, Canada also loses out.”

Lama Mourad, another PhD candidate in political science, also wrote an op-ed for the Toronto Star, tapping into her own personal experiences as a child of refugees and her research into how Lebanon has responded to the Syrian refugee crisis, to call on Trudeau to repeal the Safe Third Country Agreement with the U.S.

Gilbert is also calling for the rescinding of both the Safe Third Country Agreement and the Designated Country of Origin status.

“The United States can no longer be considered a safe country,” Gilbert said. “We need to make it easier for vulnerable peoples in the United States to seek refuge in Canada.

“The prohibition against refugees further underscores the ways that this vulnerable group is increasingly securitized, that is, characterized as a security risk. With the sweep of a pen, the most at risk are deemed to be the most risky. And this is despite the fact that no acts of terrorism on U.S. soil have been associated with refugees in more than four decades. This is not evidence-based decision making.”

In his statement, the Faculty of Law's Iacobucci said people are continuing to engage in “in ways small and large” in efforts related to the travel ban.

“Universities are grounded on the simple, incontrovertible premise that ideas matter,” Iacobucci said. “Our community, and others, will continue to provide great and good ideas to counter the small and the bad.”