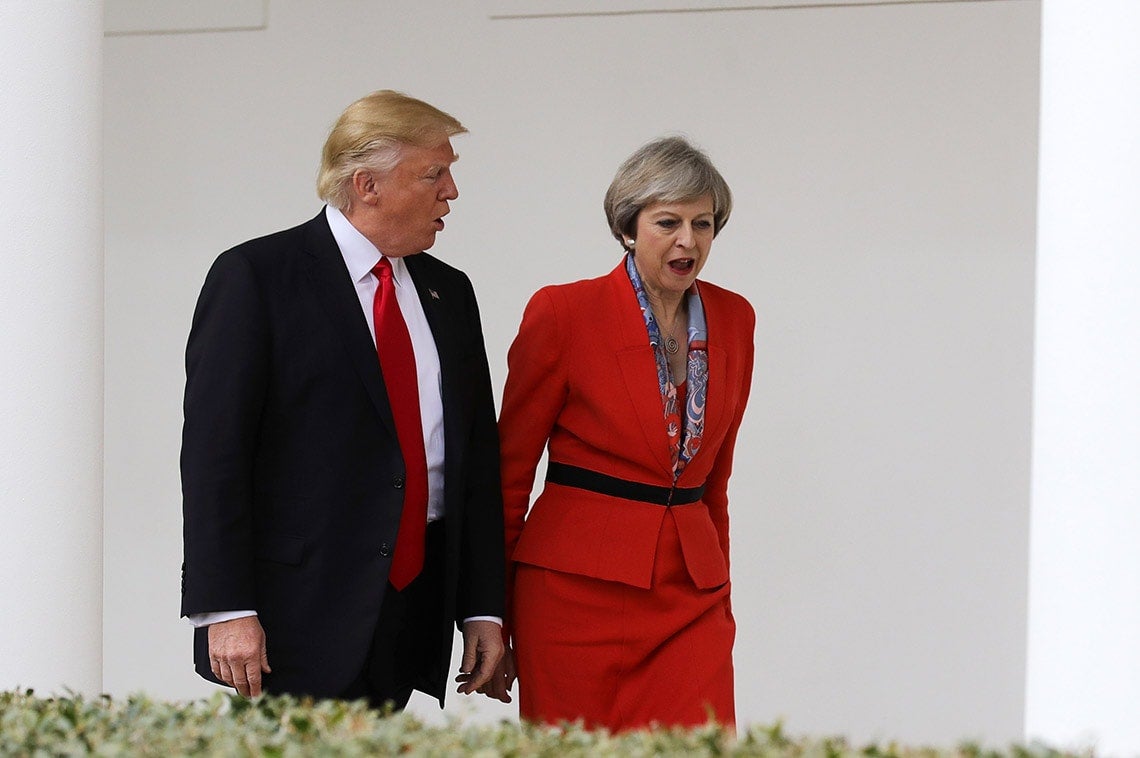 U.S. President Donald Trump meets with British Prime Minister Theresa May at the White House during a two-day visit to the United States (photo by Christopher Furlong/Getty Images)

Protectionist policies “will be really damaging for the United States”

President Donald Trump has spent his first week in office putting the wheels in motion on a number of his campaign promises – from building a wall along the country's border with Mexico to scrapping Obamacare.

Most of these actions came in the form of executive orders – documents that serve as legally-binding directives to government agencies to put policy into practice.

U of T News spoke with Emily Gilbert, an associate professor of geography and planning and Canadian studies in the Faculty of Arts & Science, about the implications of these executive orders and how Canada will be affected by these sweeping changes.

How will Trump’s executive order to build a wall bordering Mexico play out?

It's interesting what the executive order actually does because it's a statement by the president about intentions. But how it actually plays out is much, much more complicated.

I think the way the executive orders are made suggests a different kind of mentality around government. The devil will be in the details – it will be really interesting to see how it gets built and how that affects relations with Mexico both with respect to mobility across the border and trade.

Trump has made it clear his administration will be tightening its immigration policies – what are the implications for Canada and other countries?

If there’s going to be a cancellation of visas for countries that are identified as harbouring terrorism, which is one thing Trump has said he's going to do, Canada is already implicated in the United States with our visa programs with vetting visa applicants according to U.S. standards. So if there's a moratorium from the United States on visas from certain countries, that could have immediate ramifications for Canada in terms of our own visa application process.

The other concern is the wall if it gets built. It has an impact on the mobility of Mexicans and Latin Americans into the United States and into Canada in terms of our openness to people from those countries coming as migrants or asylum seekers. We have legislation with the United States that prohibits refugees from claiming asylum at our land ports of entry, which is why we have seen people now circumventing the ports of entry and trying to come across the border in undocumented ways.

The third concern is that we are now working with the United States on shared entry-exit system. We are sharing information about individuals who cross at the land border and using the document of entry as the record of departure. If the U.S. is moving to harden their records of entry and exit, we are implicated in those processes and are also complicit in the kinds of ways of exclusion that will be enacted in the entry-exit program.

The controversial Keystone XL and TransCanada pipelines are expected to be given the green light by Trump – what does this mean for Canada?

Our federal government is saying this is a good thing because they've been advocating for moving ahead, but there are lots of people who are against the expansion of the pipeline – environmental activists, Indigenous peoples whose lands will be at risk because of those pipelines so I think this is going to have an impact on our government because Trudeau has tried to present himself as both an environmental leader but also an advocate for pipelines. I think it’s hard to hold those two contrary positions at once. This is going to force Trudeau's hand to be clearer about his intentions.

Trump was quick to scrap the Trans-Pacific Partnership and is keen on renegotiating NAFTA in support of a more protectionist agenda. How harmful will this be for America’s trade partners?

Canada will feel the brunt of some of those decisions. I'm all for renegotiating NAFTA but not for the reasons that Trump is.

But the protectionism Trump is signalling is already in place. It’s been in place since 2009 thanks to Obama and the financial crisis. Canada managed to negotiate some wiggle room there, and so it's going to be interesting as the idea of protectionism in the United States hardens – how much wiggle room Canada has or how much we're going to start looking internationally to diversify our trade.

How will the U.S.’s relationship with China change under Trump’s protectionist policies?

It's not going to be easy considering Trump accused them of currency inflation and negative trading practices that he associates with China. There's also the threat of imposing a tax on them as he's threatened with Mexico. I don't think he's laid the groundwork on a good collaborative relationship with China.

Could this kind of protectionism backfire?

In the early days it might be seen as a success story. The long-term implications will be really damaging for the United States.

We live in a globalized world now – and those kinds of protectionist policies are renouncing all senses of connection with the rest of the world. Some of the people in his party have suggested having policies that clearly benefit the United States and penalize other countries. That's just not a constructive way to engage with the rest of the world, and that will have all kinds of fallout both economically and in security issues.