U of T undergraduate has a message for women and girls considering STEM fields: 'You can' 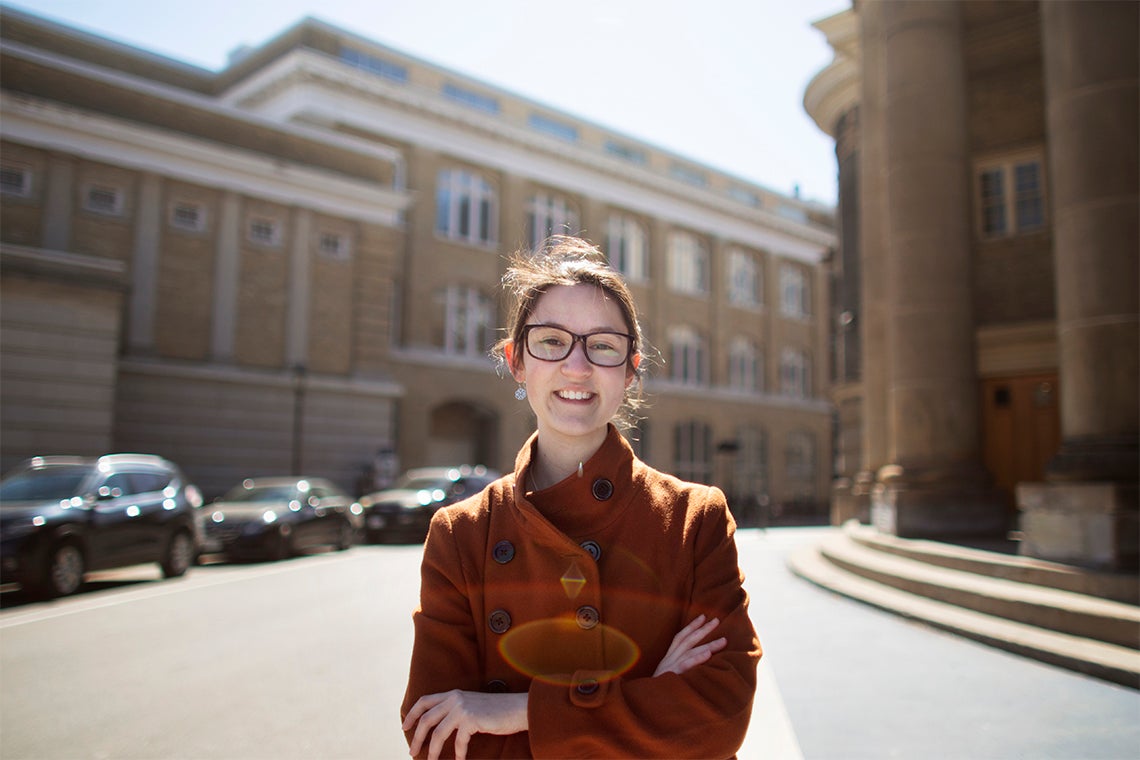 Adriana Diaz Lozano Patino, a third-year engineering science student at U of T, is focused on finding innovative solutions to global water and energy needs (photo by Nick Iwanyshyn)

As a young girl in Mexico, Adriana Diaz Lozano Patino was clear on what she wanted to do when she grew up.

“Since I was very young, I loved the idea of becoming a scientist – even though when you’re 10 years old, you don’t really know what that actually means,” says Patino, now a third-year engineering science student in the University of Toronto’s Faculty of Applied Science & Engineering who is majoring in biomedical engineering.

Last summer, Patino completed an internship in the department of mechanical and industrial engineering’s Water and Energy Research Laboratory, which researches innovative engineering solutions for global water and energy needs. There, she worked on research pertaining to sustainable sanitation and water desalination in Mexico and Bangladesh, respectively.

The lab is directed by Associate Professor Amy Bilton, who Patino describes as “a phenomenal role model.”

Bilton and Patino are among a growing number of women scholars, students and researchers whose work is pushing the boundaries of traditionally male-dominated STEM (science, technology, engineering and math) fields while helping to spread a message of inclusivity – a message that underpins the International Day of Women and Girls in Science that was adopted by the United Nations in 2015.

Patino, a Pearson Scholar, says her summer stint in Bilton’s lab – funded by the Engineering Science Research Opportunities Program – made her doubly determined to pursue a career in engineering.

Her first project saw her assist with PhD research focused on designing sustainable sanitation systems for the periphery of major cities in Mexico.

“Around 11 million Mexicans don’t have access to safe sanitation technologies, particularly those who live in the periphery of cities,” Patino says. “Mexico, just like many countries that are deemed the global south, has this really interesting interface at the periphery of major cities where you see urban and rural characteristics merging together. These communities usually lack access to general infrastructure and services.”

Her contribution to the project focused on figuring out why households were being deprived of reliable sanitation systems, particularly in Mexico City, Puebla, Guadalajara and the State of Mexico.

Using data gleaned from Mexican government and non-profit sources along with information on geographic conditions in those regions, Patino was able to zero in on some of the key variables. They included: the distance of households from downtown, the legal status of the land on which people live and access to health institutions.

“I’m from Mexico, so I grew up around this and have a vague idea of it, so it’s very important for me to be able to work on something that can eventually help people back home. Of course, it would’ve been better to be able to go there and talk to them but alas, COVID,” Patino says.

“In general, I think it’s something that’s at the heart of what the Water and Energy Research Lab does, and what Professor Bilton really wants to get her students to look at, which is understanding the community you’re going to work in and the context around the problem you’re trying to solve – so that you don’t end up doing engineering out of context and end up with solutions that may sound really cool in theory, but in practice just don’t adapt to the cultural and social context.”

“Reverse osmosis uses pressurized membranes to filter water and UV LED is usually used to kill micro-organisms. These technologies have never been coupled before, at least from what we found in the literature,” Patino explains. “We wanted to be able to build a system that would be powered by solar panels, so it can be used in remote communities. Particularly, we’re designing around a case study of a school community in Bangladesh, taking into account the geography of the area and the amount of people the system would be serving.

“What we were trying to do was to set the stage for future master’s students to come and build on the system and hopefully, one day, test it in the field.”

Patino says she hopes to go on to pursue graduate studies and research – ideally at the intersection of bio-engineering and global development.

Her passion for using engineering to solve pressing global challenges is a trait that’s increasingly prevalent among engineering students, according to her professor.

“With a lot of younger students in general, there’s a lot of interest in thinking about how they can use some of their skills to think about overall betterment of quality of life for people around the world,” says Bilton, who earned her bachelor of applied science in engineering science at U of T before going on to complete her master’s and PhD at MIT.

Bilton describes Patino as a “very positive and energetic person” who went “above and beyond” in all of her projects. She also said Patino’s work ethic and perspective as a young woman and international student from Mexico are a testament to the benefits of embracing diversity in STEM fields.

“It’s a push I make within my own group – to try and make sure we have a diverse group of students from cultural, gender and across all the spectra. I think there’s a general recognition now – that probably wasn’t there back when I was a student – that having that diversity brings a different kind of strength in terms of being able to think more broadly about problems,” says Bilton, who is also director of U of T’s Centre for Global Engineering. “Especially when the work itself is focused on inclusion, global development and making sure everyone has access to services that improve quality of life.”

Bilton notes that efforts to welcome more women and girls into STEM research and study at U of T is a key part of the university’s wider push to advance the 17 UN Sustainable Development Goals –  one of which is gender equality.

“I do feel like there’s a shift happening in this area and we’ve come a long way,” Bilton says. “[But] we still have a ways to go.”

As for Patino, she’s also using her time as a student to encourage young girls to pursue an education in STEM fields through her work at Hi Skule, U of T Engineering Society’s outreach club.

“We want to make sure that other girls see that you can go into STEM,” she says. “It’s not scary, you’re going to be loved, you’re going to have friends and you’re going to have faculty who support you. We’re trying to bring across the message that it’s a pretty awesome field. There’s lots to learn and women sometimes feel like they’re not going to live up to it because they’ve been taught that, but it’s completely not true.

“Particularly in the engineering community at U of T, I’ve found that the students are very supportive of each other. I’ve always felt like I’m heard and I get access to things. I never felt there’s been any challenge in my way because I’m a woman.”

Patino concedes that pursuing a career in a STEM field isn’t easy – for anyone – but stresses that women and girls are more than equipped to excel.

“Like anything in life, there are always challenges. But never think that because you’re a girl or you identify as a girl, that you can’t do it,” she says. “You can.”