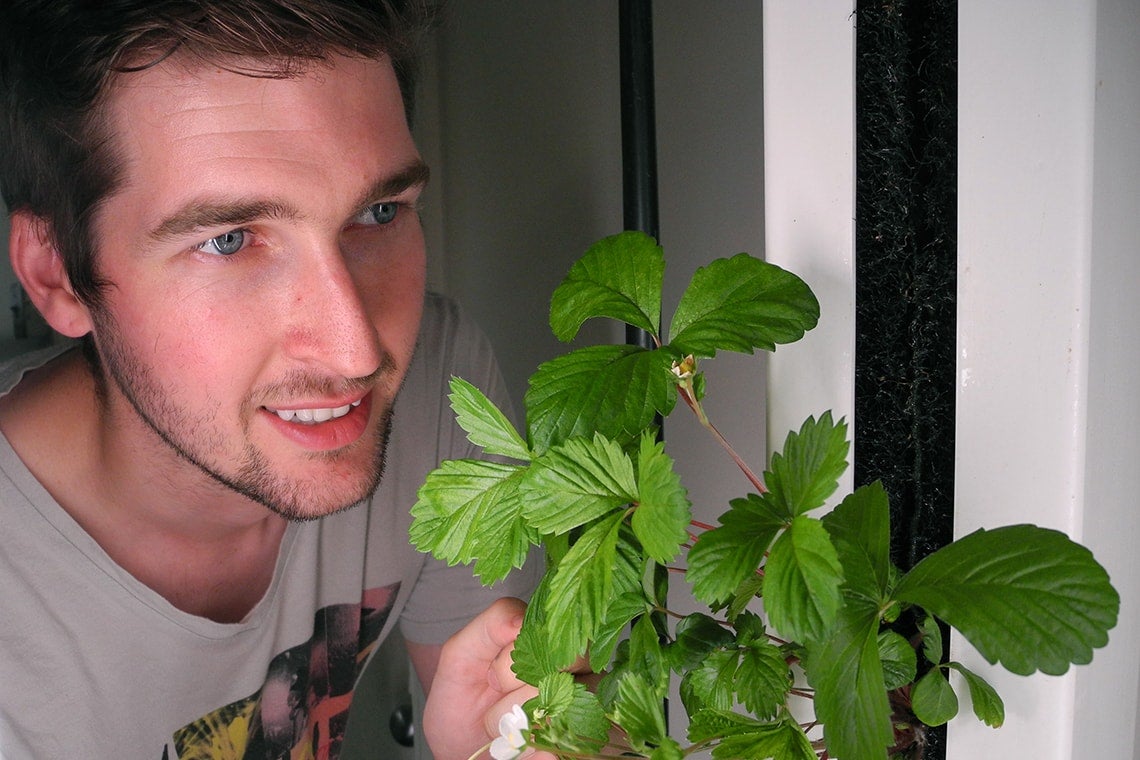 A University of Toronto startup that sells vertical hydroponic growing systems has joined forces with a Ryerson University-linked non-profit to bring down the stratospheric cost of fresh fruits and vegetables in Canada’s northernmost communities.

The unique partnership was forged at this year’s OCE innovation conference after Conner Tidd, a co-founder of U of T’s Just Vertical, ran into the founders of Ryerson’s Growing North. Tidd knew Growing North had built a geodesic greenhouse filled with hydroponic towers in Naujaat, NV.

“We said, 'We heard you’re building a new greenhouse. We can be your go-to guys on that,’” recalls Tidd. “It sort of took off from there.”

Both Tidd and co-founder Kevin Jakiela graduated from the Master of Science in Sustainability Management degree program at U of T Mississauga. They're drawing on their graduate-level expertise to help Growing North develop a proposal for a Nunavut high school course on sustainable food production – a bid to get locals to take ownership over the project.

“They’ve got the technology down so now they want some expert advice about how to best educate somebody about it,” says Tidd, adding that Jakiela also brings to the table eight months of Arctic experience teaching on the tip of Northern Quebec. Leigh Anne Willard, the director of curriculum development for Nunavut’s department of education, says the department will need to sign off on any courses before they can be adopted by Naujaat’s high school. She added the department could also decide to incorporate the curriculum more broadly across the territory.

While both Growing North and Just Vertical use the same third-party hydroponic technology – tall, skinny towers lit with LED lamps – Just Vertical is focused on promoting urban farming in a bid to cut down on the pollution created by shipping food back and forth across the globe.

The startup has received assistance from the ICUBE accelerator at U of T Mississauga, one of 10 accelerators at the university. Just Vertical rents the hydroponic towers to customers to install in their homes and provides them with carefully curated plants to grow – everything from lettuce to strawberries.

Just Vertical wasn't conceived with the idea of alleviating food security issues in Canada's North. But Tidd says the company's decentralized model of food production could work well in communities that are unable to support a larger, greenhouse-style project.

He says Just Vertical is also in the process of working out a deal with Earls Restaurants to install a hydroponic wall in one of their restaurant’s dining rooms that produce microgreens for the kitchen.

Growing North, meantime, was co-founded in 2013 by Ryerson students Stefany Nieto and Benjamin Canning.  The non-profit, which took home a $250,000 Google Impact Challenge prize earlier this year, erected a geodesic greenhouse in Naujaat in 2015 after extensive consultation with the local community. It has plans to do the same elsewhere in the Arctic.

“With the heightened prices and food instability, we wanted to create the opportunity to grow food locally to cut out the transportation process, lower the prices and provide a greater supply of fresh food,” says Christian D’Antonio, the group’s education director.

The greenhouse's first full crop, including carrots and kale, was delivered to Naujaat locals last year.

“They loved the kale,” D’Antonio says. “They made kale chips and stored it through the winter.”