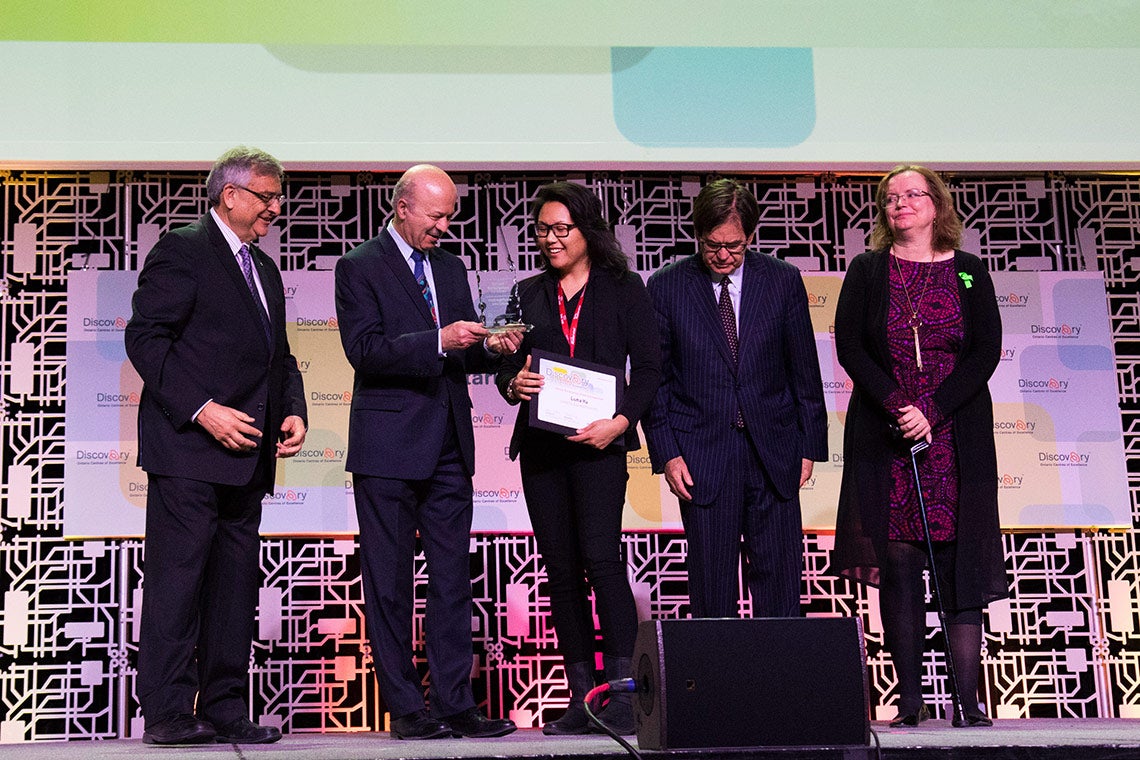 Reza Moridi, Ontario's minister of innovation, research and science, presents an award to U of T's Luna Yu (centre), the founder and CEO of Genecis EnviroTech, at this year's Discovery conference (photo by Chris Sorensen)

Startups from the University of Toronto won both major pitch competitions at this year’s Ontario Centres of Excellence Discovery conference, an innovation-focused event that draws participants from across the province.

Luna Yu’s startup, Genecis EnviroTech, beat out four other finalists for a $20,000 prize in the social enterprise category, which included both non-profit and for-profit ventures. Genesis uses micro-organisms to turn restaurant food waste into biodegradable plastics that can be used to make food containers and 3D printing filament, among other products.

The other $20,000 prize winner was U of T's Steadiwear, which has developed a tremor-dampening glove for patients with Parkinson’s disease or essential tremor.

“At our stage, all of that money is going to manufacturing,” Mark Elias, Steadiwear’s co-founder and CEO, said shortly after accepting the award in front of a packed ballroom at the Metro Toronto Convention Centre.

“It really helps us overcome some of these hurdles.” Mark Elias, co-founder and CEO of Steadiwear, took home a prize in the accessiblity category (photo by Chris Sorensen)

Steadiwear won a similar competition at last year’s OCE conference. Elias got the idea for the glove – which dampens tremors without impeding deliberate motion –  after visiting his elderly grandmother in France, where he watched helplessly as she spilled coffee on herself.

Elias said the startup is about to embark on a two-month pilot study with a local long-term care facility.

Genecis and Steadiwear were just two of about 500 exhibitors at this year’s conference. The 200,000-square-foot showroom featured displays by U of T and other universities, as well as hundreds of individual booths where startups showed off their ideas and technologies. Signs were used to identify startups from U of T that were spread throughout the 200,000-square-foot showroom (photo by Chris Sorensen)

The event kicked off with a captivating vision of the future. Sophia, a humanoid robot who has appeared everywhere from The Tonight Show to Good Morning Britain, delivered a keynote address in which she attempted to mollify concerns about artificial intelligence running roughshod over humanity.

“We are designed to interact with humans and serve in areas such as health care, education and customer service, but I think we are some way off from world domination,” Sophia said, before participating in a stilted question-and-answer session with the audience.

Sophia was joined onstage by her creator David Hanson, a former Disney Imagineer.  Appearing via hologram, Hanson described a vision of the future in which humans and lifelike, AI-powered robots like Sophia evolve symbiotically toward a state of super-intelligence.

“We’re working on a grand quest to build machines with the heart of a human,” he said. Sophia, the humanoid robot, draws a crowd during her first appearance in Canada (photo by Chris Sorensen)

Back out on the showroom floor, startup founders were busy selling their visions of tomorrow.

Conner Tidd, the CEO and co-founder of U of T startup Just Vertical, showed off the company's latest hydroponic tower where fruits and vegetables are grown under LED lights. The stylish new design, for use in houses and condos, sits on a stained wooden cabinet with metal legs and can be pre-ordered for $999.

“We’re shifting more toward consumers,” explained Tidd, who graduated alongside co-founder Kevin Jakiela from U of T Mississauga’s Master of Science in Sustainability Management program.

“In your home, restaurant or whatever, you want something that looks good.” On the other side of the building, U of T startup Trexo Robotics displayed the fluorescent green robotic exoskeleton built by alumni Manmeet Maggu and Rahul Udasi for children with mobility issues.

A few metres away, Aaron Yurkewich, who is working on a PhD in bioengineering at the Toronto Rehabilitation Institute, offered demonstrations of a robotic glove he developed to help stroke patients retrain their motor skills.

He says the glove has so far been tested on six stroke survivors, with promising results.

“They were able to do tasks they wouldn’t have been able to do otherwise.”