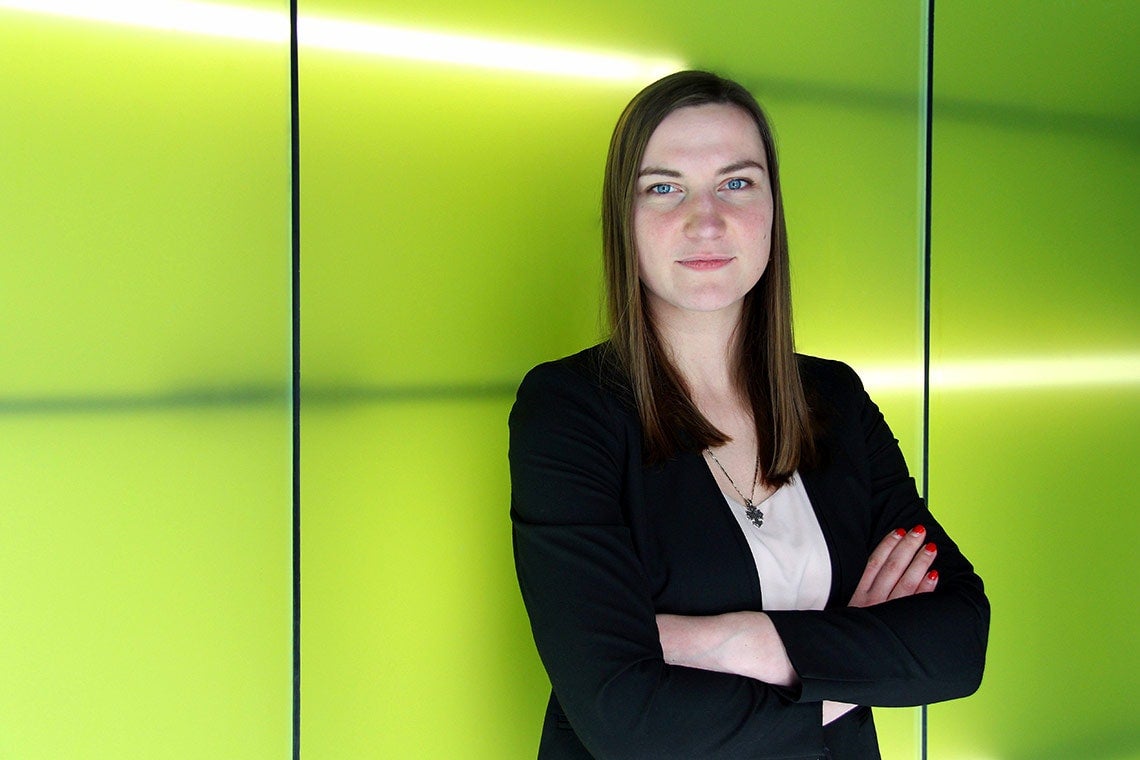 Diana Kraskouskaya, the CEO of Dalriada Therapeutics, is a medicinal chemistry researcher at the University of Toronto Mississauga who is trying to promote entrepreneurship in the pharma space (photo by Blake Eligh)

"Patients can actually die from the chemotherapy itself, not from the disease"

Though Canadians knew it was coming, Gord Downie’s death still came as a shock.

The lead singer of The Tragically Hip, a band almost as beloved in this country as hockey, succumbed last fall to the incurable brain cancer – glioblastoma – he was diagnosed with three years and one teary-eyed, cross-Canada tour earlier.

But, if Diana Kraskouskaya has her way, the prognosis for patients like Downie won’t be nearly so grim.

The University of Toronto Mississauga researcher is co-founder and CEO of a startup called Dalriada Therapeutics that’s pursuing small molecule-based drugs to treat aggressive and rare cancers like myeloid leukemia and glioblastoma.

In the case of cancers like acute myeloid leukemia, Kraskouskaya says keeping toxicity levels at a minimum is particularly critical because the disease tends to strike elderly patients who have a tough time with chemotherapy.

“Patients can actually die from the chemotherapy itself, not from the disease.”

Kraskouskaya, who was the Gunning Group’s research manager, says witnessing the lab's commercialization efforts during her PhD prompted her to become directly involved with a startup of her own.

“I don’t think there’s a bigger reward than to actually see [the research] be converted into a product that gets to the market and has a positive impact,” she says.

To that end, Dalriada incorporated two years ago and now employs nine full-time, PhD-level scientists. Kraskouskaya says the goal is to have the startup’s lead drug candidate in its first clinical trial within two years and to market within seven.

One challenge the company is facing, according to Kraskouskaya, is the lack of a well-developed pipeline in Ontario to move pharmaceutical research from the laboratory into the commercial realm – a long and costly process.

For Kraskouskaya, a piece of the puzzle is the Centre for Medicinal Chemistry at U of T Mississauga, first announced in 2016. The centre, made possible by a $7 million donation by Orlando Corp., is being built around Gunning and other principal investigators working in fields like computational chemistry and cancer biology.

“Our vision is to promote the commercialization of therapeutics in Ontario, as opposed to conducting early innovation here and then out-licensing it to non-Canadian entities and losing the IP [intellectual property],” Kraskouskaya says.

While she says the lab has already received assistance from U of T Mississauga’s ICUBE and U of T’s UTEST accelerators on the entrepreneurship front, she stresses there is a need for startup support that has specific expertise with the pharmaceutical industry.

“We’re hoping to have a startup space at this centre as well as the support services for graduate students and faculty who are interested in starting pharmaceutical companies around their technologies,” she says.

“When we formed Dalriada, we were hoping this would be a new beginning and a validation startup that shows we can do it – that we can maintain the development of IP in Ontario.”