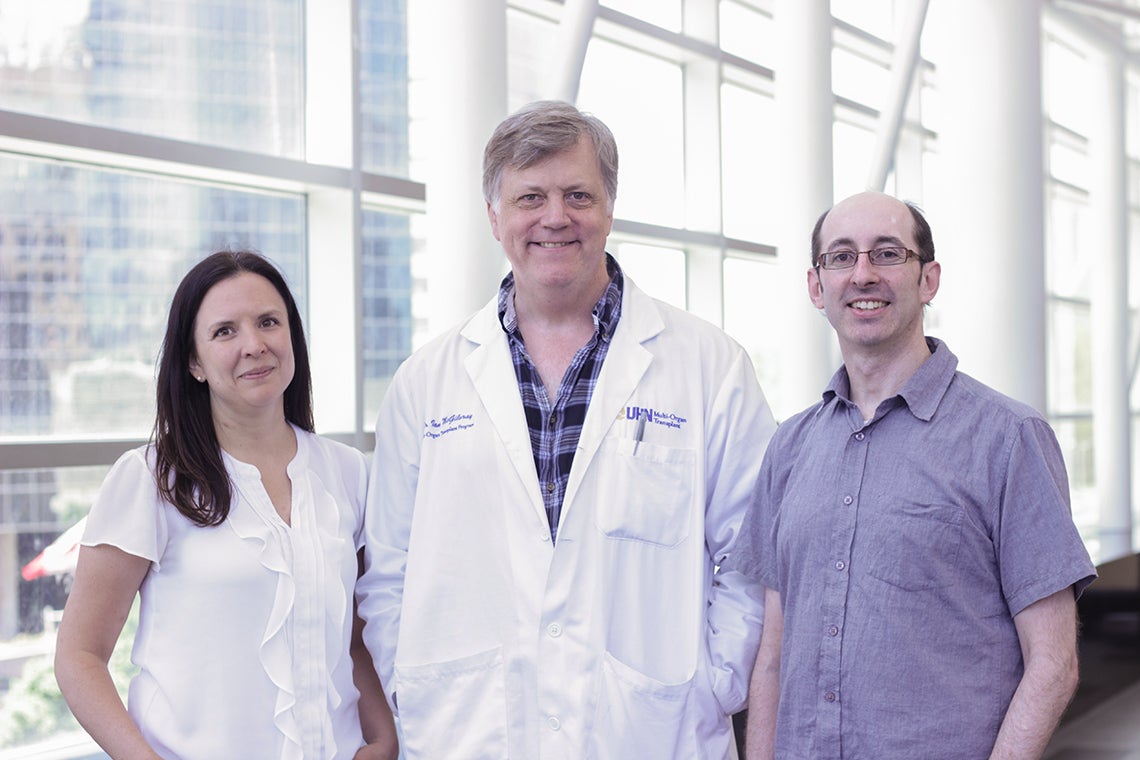 Professor Gary Bader (right), who is on the organizing committee for the Human Cell Atlas, helped researchers Sonya MacParland (left) and Ian McGilvray (right) create the first map of the human liver at the cellular level (photo courtesy of UHN)

The Human Genome Project, a large-scale international effort to determine the complete DNA sequence that defines the human body, took more than 12 years to complete and involved thousands of researchers.

Now, a similar effort is underway to map each of the trillions of cells in the human body.

The Human Cell Atlas (HCA) would be a comprehensive map of cells that has the potential to rapidly advance the understanding of human health and the diagnosis, monitoring and treatment of disease, according to Gary Bader, a computational biologist and professor at the University of Toronto’s Donnelly Centre for Cellular and Biomolecular Research and the department of molecular genetics in the Temerty Faculty of Medicine.

“This project will likely be larger than the Human Genome Project, and it requires a massive international effort. No single individual or institute could do this on their own,” he says. “It’s multi-disciplinary in nature, and pulls in people from genomics and technology development, basic biology, clinical research, computational biology and ethics.

“We encourage participation from all countries and relevant scientific communities.”

Bader, who is on the organizing committee for HCA, is helping to co-ordinate a scientific meeting of the HCA from Aug. 25 to 27. The meeting will focus on human development and pediatrics, mapping the body from conception to adolescence. Medicine by Design is a lead sponsor of the meeting, along with the Chan Zuckerberg Initiative and others.

Bader says the August meeting will bring together groups of people who are working on critical questions about cell types and states during human development.

“We’re aiming to deliver a highly interactive meeting that will provide plenty of opportunities for virtual face-to-face interaction in breakout discussion sessions,” Bader says. “A silver lining of having the meeting online instead of in-person, as was originally planned, is that there are no space restrictions. It can be open to anyone who wants to attend. Also, there are no travel costs for attendees, and we are able to offer registration free of charge.”

Session topics will include: understanding cellular decision-making during development; lineage tracing; clonal evolution; tagging and its applications; and developmental origins of health outcomes over a lifespan. There will also be a session on regenerative medicine, led by Guoji Guo and Jason Rock, focusing on how developmental and pediatric single cell atlas data can shed light on tissue aging and repair processes.

Regenerative medicine uses stem cells to replace diseased tissues and organs, creating therapies in which cells are the biological product. Regenerative medicine can also mean triggering stem cells that are already present in the human body to repair damaged tissues or to modulate immune responses. Increasingly, regenerative medicine researchers are using a stem-cell lens to identify critical interactions or defects that prepare the ground for disease, paving the way for new approaches to preventing disease before it starts.

“There is strong evidence that we’ll have to really understand development to live up to regenerative medicine’s key aims,” Bader says. “There are questions we don’t know the answer to – for example, why do children heal better than adults? These answers are essential for researchers who are developing stem cell therapies or ways to encourage self-repair in the body.”

The HCA group is mapping 14 organ systems, each organized into its own bio network. For instance, the gut, heart and kidney each have their own bio network, comprising researchers that focus on that specific system. Bader is part of the liver bio network.

Bader, along with the Temerty Faculty of Medicine Associate Professor Sonya MacParland and Professor Ian McGilvray –  a scientist, and surgeon and senior scientist, respectively, at University Health Network (UHN) – are part of a Medicine by Design collaborative research team that, in 2018, created the first map of human liver cells at the molecular level. They are currently part of the large, Medicine by Design-funded team project studying how to harness the liver’s power to regenerate.

The liver map represents the first time a human organ has been charted at the single-cell level. It illuminated the basic biology of the liver in ways that could eventually increase the success of transplant surgery and enable powerful regenerative medicine treatments for liver disease such as regenerating the liver with stem cells.

“This is a tool that can be used by researchers who are developing cells in the lab. For instance, a U of T and UHN team recently published work that showed they can develop functional blood vessel cells found in the liver. This drew on our liver map work, which provided a benchmark for those researchers to compare their cells with adult human liver cells,” says Bader. “HCA continues to expand this work – for example in pediatrics – and it will become a fundamental resource for regenerative medicine researchers.”

Medicine by Design is sponsoring the HCA meeting in August because it’s an opportunity to engage with the international effort on human cell mapping, which creates new scientific collaborations for the Medicine by Design community.

Moreover, the HCA informs new directions in regenerative medicine research, says Michael Sefton, executive director of Medicine by Design and a University Professor in the department of chemical engineering and applied chemistry in the Faculty of Applied Science & Engineering and the Institute of Biomedical Engineering.

“This international event will connect fields and people that traditionally don’t work together,” says Sefton, whose lab is located at the Donnelly Centre for Cellular and Biomolecular Research. “A massive collaborative undertaking is what’s necessary to bring HCA to fruition, and Medicine by Design is proud to support this effort. We can’t overstate how much the HCA project could advance and transform regenerative medicine.”

Bader says in addition to the opportunities for scientific learning, the event could have other benefits for attendees.

“One of the advantages to attending the HCA meeting is the opportunity to network and potentially find out about funding opportunities one might not be aware of otherwise. It’s a great opportunity for researchers to connect beyond their local collaborations.”

Funded by a $114-million grant from the Canada First Research Excellence Fund, Medicine by Design brings together more than 150 principal investigators at U of T and its partner hospitals to advance regenerative medicine discoveries.