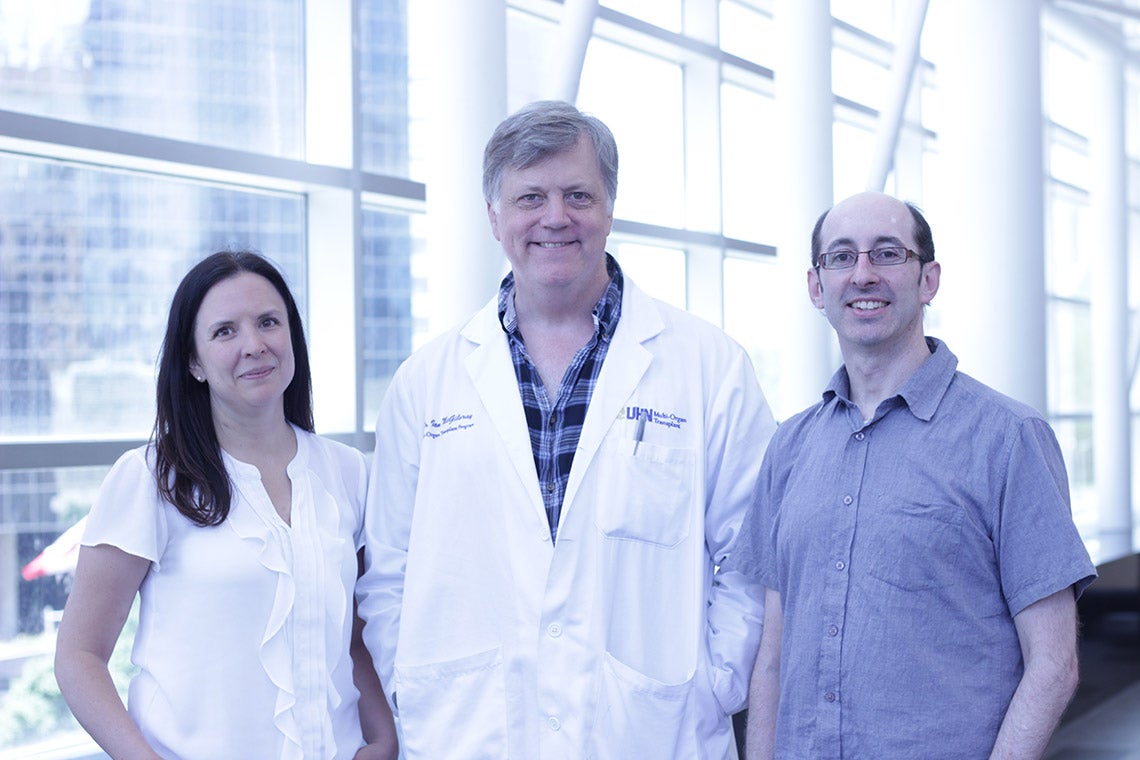 From left, Sonya MacParland, Ian McGilvray and Gary Bader are part of the collaborative research team that created the first map of human liver cells at the molecular level (photo courtesy of UHN)

A map of the cells in the human liver has been created by University of Toronto researchers and the University Health Network transplant program, revealing for the first time differences between individual cells at the molecular level that can have a profound impact on their behaviour in tissue, tumours and disease.

The researchers, led by Assistant Professor Sonya MacParland, of immunology and laboratory medicine and pathobiology in the Faculty of Medicine; Associate Professor Ian McGilvray of surgery; and Professor Gary Bader, of the Donnelly Centre for Cellular & Biomolecular Research, mapped out the cellular landscape of 8,444 individual cells obtained from the tissues of healthy deceased donor human livers.

“For the past 20 years, we have studied the liver as a soup of cells as opposed to its individual components. This makes it difficult to target individual cells that are driving liver disease,” says lead author MacParland, who is also a scientist at the Toronto General Hospital Research Institute.

By examining the gene expression profiles of each of these cells – about 1,500 active genes per cell – the researchers found 20 distinct cell populations made up of hepatocytes, endothelial cells, cholangiocytes and various immune cells such as B cells, T cells and Natural Killer (NK) cells.

“These evaluations reveal new aspects of the immunobiology of the liver, such as the presence of two surprisingly distinct populations of liver resident macrophages (“big-eaters” of cellular debris) with inflammatory and non-inflammatory functions,” write the authors in their paper published Monday in Nature Communications.

“We present a comprehensive view of the liver at single cell resolution that outlines new characteristics of resident cells in the liver, and in particular provides a new map of the human hepatic immune microenvironment,” note the authors.

The authors will also make their research available to the Human Cell Atlas Project, an international, open-access, collaborative effort to map all human cells, to help scientists understand how genetic variation impacts disease risk and influences health. Because it is an open, free resource for any researchers in the world, it will accelerate discoveries that will in turn inform new treatments and drug development.

Bader says the creation of the liver map was made possible because of Medicine by Design, a regenerative medicine research initiative at U of T with a mandate to accelerate discoveries and translate them into new treatments for common diseases.

“The liver project came together serendipitously via the Medicine by Design community, and it would not have happened without Medicine by Design,” says Bader, who is also a member of the organizing committee of the Human Cell Atlas Project.

Read more: How the first “map” of the human liver came together through a Medicine by Design collaboration

As the research director of the UHN Transplant Program, McGilvray has performed hundreds of liver transplants and cancer surgeries. In order to advance treatment of liver disease, he says, scientists must understand how the liver functions at the most fundamental level of the single cell.

The variation between cells is huge, McGilvray explains, but in 2018, it is surprising how little we know about the liver’s cellular landscape. New treatments, reduction of transplant rejection rates and regenerative medicine solutions can only be found if scientists understand how liver cells develop and work together within tissues and biological systems, he argues.

The urgency to find alternative approaches is spurred on by the increasing burden of liver disease, he says. Up to 23 per cent of obese individuals are at risk of developing fatty liver with inflammation, for example, and more than 70 million people are chronically infected with hepatitis C.

Learn more about single-cell genomics in this Research2Reality video

In creating the liver map, the team had to overcome several challenges.

First, the project could only have been possible with a multidisciplinary team consisting of transplant surgeons, immunologists, hepatologists, computer scientists and genomics researchers from different institutions to develop the first-ever map of a solid organ.

Another major problem in studying the human liver is difficulty in accessing fresh tissue. Samples in the study were collected from deceased donor livers deemed acceptable for liver transplantation, with consent and ethics approvals. This makes it unique in the world, in contrast to the standard method of studying the liver from biopsy samples.

A third challenge is isolating single cells from liver tissue. Liver cells such as hepatocytes and others are delicate and often do not survive standard tissue extraction, which may involve chopping, separating and filtering of tissue into smaller parts. During this process, cells often die.

But with the experience gained in transplantation and painstaking trial and error work of many years, the researchers were able to develop the best protocols using enzyme mixtures to gently dislodge cells embedded in the spider web-like net of connective tissue of the liver, without actually harming the fragile cells themselves.

Only then could the team begin studying the molecular make-up of each cell individually. This step is absolutely essential in gaining a deeper understanding of how a small but critical change in a cell can precipitate a disease state within a complex mix of many other cells.

The latest technological advances helped the team to overcome the limitations of previous techniques such as genomics. Although it can analyze many cell types simultaneously “in bulk”, it cannot tease out the critical differences between cells or do so in combination with multiple other data.

The team reached out to colleagues in the Princess Margaret Genomics Centre with their 10X Genomics Chromium system which excels at the analysis of complex tissues and heterogeneous collections of cells, and to the Donnelly Centre’s Bader, who developed the state-of-the art data analysis pipeline and custom pathway analysis software for the project. They were then able to map out the genetic and molecular function of each cell and how each one contributes to overall liver function.

“We found some very cool things about the human liver that we did not expect,” says McGilvray. “Until this study, very little was known about what the liver macrophage – the ‘tank’ of the immune system that destroys foreign substances and co-ordinates the immune response – actually is. We found that there are two distinct populations of macrophages in the human liver, one which is pro-inflammatory and the other anti-inflammatory.”

This new understanding can help scientists to harness these two contrasting macrophages to, for example, achieve “tolerance” of a new donor organ, says McGilvray. For transplant recipients, he explains, in the future, clinicians may want to downregulate the pro-inflammatory cells and upregulate the anti-inflammatory cells so that the recipient does not reject the new organ, and even may not need to take as many or any immunosuppressive medications.

MacParland adds that the new liver map gives us a new understanding of many more populations of cells found in a normal liver. Eventually, she says, as the map becomes more and more detailed, we can compare these cells to those in a diseased liver.

Then, she says, we can answer the question: “How can we get the liver back to a normal state?”

The research was funded by: University of Toronto’s Medicine by Design initiative which receives funding from the Canada First Research Excellence Fund, funds from UHN’s Transplant Program, and the Toronto General & Western Hospital Foundation.