U of T researcher and JLABS draw U.S. drug delivery startup to Toronto 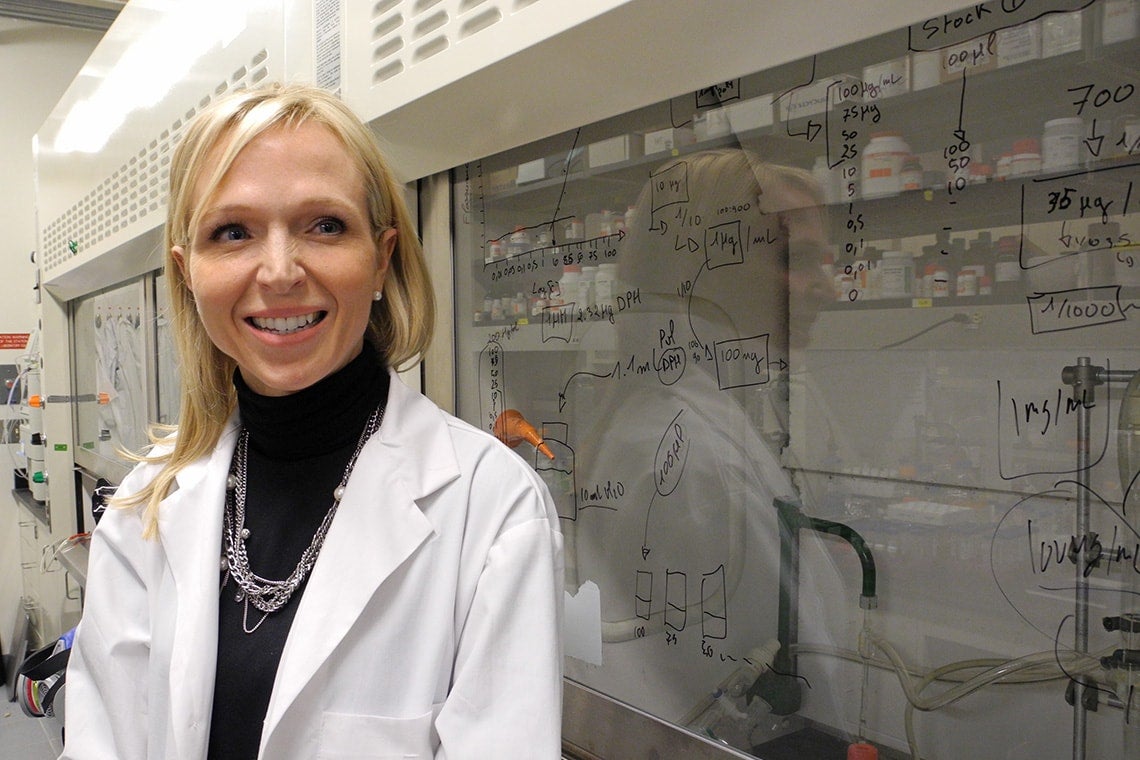 Shawn Glinter, the CEO of Nashville-based Pendant Biosciences, was born in Winnipeg and played hockey in college.

But it took a leading University of Toronto researcher – and last year’s launch of life sciences incubator JLABS @ Toronto – to rekindle his interest in Canada.

Though Pendant originally licensed its polymer-based drug delivery technology from Vanderbilt University, the path to commercializing it soon led Glinter and his team to Christine Allen, a professor in U of T’s Leslie Dan Faculty of Pharmacy.

“I courted her for about a year before she finally said yes,” says Glinter.

Allen's research focuses on new technologies for drug delivery. She's one of only a handful of people in North America familiar with Pendant's polymer technology, which promises to make drugs more efficient, longer lasting and opens the door to drug-impregnated implants and other medical devices.

Glinter calls her a “rock star” in the field.

Now the relationship is poised to grow even closer – and more productive – after Pendant was accepted into Toronto's JLABS life sciences incubator earlier this year. The 40,000 sq. ft. facility, which celebrates its one-year anniversary on Thursday, is housed on one of U of T’s floors in the MaRS West Tower and provides biopharmaceutical, medical devices and consumer digital health startups with shared lab and office space, as well as connections to experts, industry and investors.

Toronto's JLABS location, the first to be opened outside the United States, is the result of a unique collaboration between Johnson & Johnson Innovation, Janssen, U of T, MaRS Innovation, the Ontario government and several hospital partners. The number of resident startups calling Toronto's JLABS home has nearly doubled over the past 12 months, with nearly half of them boasting connections to U of T. They include WinterLight Labs, Nanovista, 6Biotech App4Independence and DNAstack.

The presence of JLABS in Toronto has added to the city's growing reputation as a life sciences hub, centred on U of T and its adjoining cluster of partner hospitals, research institutes and business incubators.

Global giant Johnson & Johnson “made a conscious decision to invest in Toronto life sciences,” says Glinter, when asked about the decision to move his company north (Glinter himself plans to remain in Nashville but will travel to Toronto several times a month). “That, to me, speaks volumes.”

Allen, meantime, envisions her graduate students and post-doctoral researchers moving seamlessly back and forth between Toronto's JLABS and her lab at U of T – precisely the type of private-public cross pollination that was envisioned by its founders. She says Pendant’s biodegradable polymer technology promises to vastly improve drug treatments for patients because it’s far more flexible than Poly (lactide-co-glycolide), or PGLA, the industry’s current polymer of choice.

“Think of all the drugs that are out there and how every single molecule is different,” Allen says. “But molecule-material interaction impacts drug formulation performance. It impacts its stability, the amount of drug you can incorporate and the drug’s release-rate.”

For patients, that could mean the difference between having one injection every three to six months, instead of every couple of days.

“It’s about making drugs more effective,” Allen says. “If you can give patients an injection, and they don’t have to come back to the doctor every day, week or month that improves their compliance and quality of life.”

Pendant’s polymer can also be stretched into thin sheets to be used for coatings on medical devices or fashioned into tiny nanoparticles. Another possible application: using the polymer to make transparent, drug-infused contact lenses that allow allergy sufferers to forgo eye drops.

Allen’s partnership with Pendant has been very much a two-way street.

She says working with the hard-driving Glinter and his team has injected her lab with a strong dose of business savvy and helped her better understand the market opportunities facing Nanovista, another startup that she co-founded with David Jaffray, a professor in U of T’s Faculty of Medicine and the director of the Institute for the Advancement of Technology for Health, as well as Jinzi Zheng, an assistant professor at U of T’s Institute of Biomaterials & Biomedical Engineering (IBBME). Nanovista makes an imaging agent that helps surgeons see tumours more precisely.

“I think JLABS has been great for Toronto,” Allen says.  “It’s been huge for us, and it’s been huge for Canada. And we can make the most of this at U of T because we’re right across the street.”