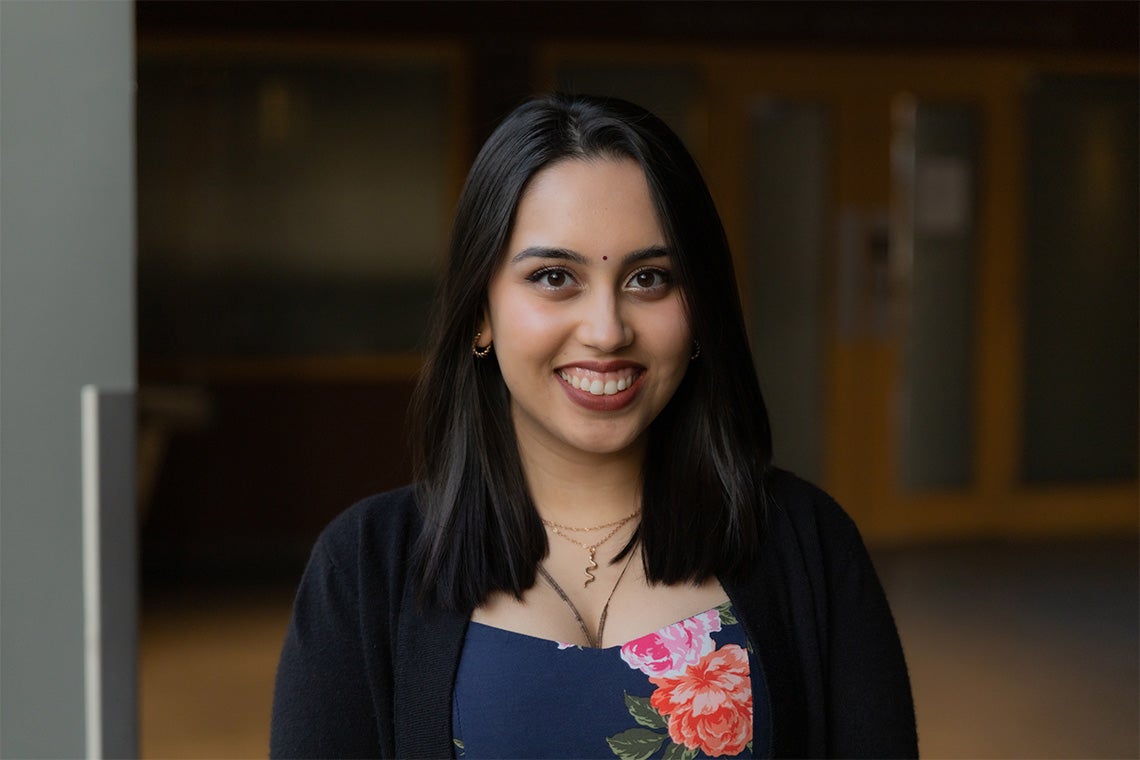 U of T grad Mukti Patel says a degree in the study of religion opens many doors, training students to be critical thinkers and developing the understanding and cultural awareness necessary to work with others (photo by Shayla Anderson)

Mukti Patel visited India for the first time during her gap year after high school. Born in Canada and raised in Richmond, Va., Patel was eager to see the country where her parents grew up.

The trip included a visit to her parents’ home state of Gujarat, the neighbouring state of Rajasthan and the country’s capital, New Delhi.

“I thought everything was fascinating, new, brilliant,” Patel says, adding she was mesmerized by the ubiquity and diversity of religious symbolism everywhere she went.

“It’s when I first started to notice the visual impact of religion. I was drawn to the carvings in temples, the religious storefront signs and collections of murtis [sacred images] in stores – and I wanted to know more about the stories and histories of these pieces.

“It got me thinking about the role of religion in the everyday, because it was very different to what I’d seen back home.” 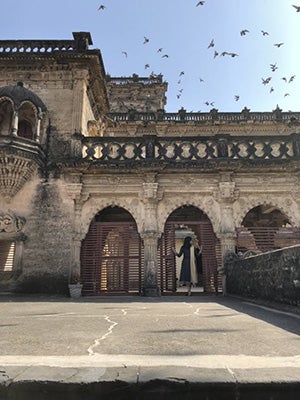 Fast forward to today and Patel is set to graduate from Innis College with an honours bachelor of arts with a specialist in the study of religion – a field that she says opens doors to many opportunities, contrary to popular misconception.

“The academic study of religion isn’t as limiting in terms of career prospects as some people might think,” Patel says. “I have friends with religion degrees who have gone on to law school, business, academia – since the program is interdisciplinary and can involve a range of topics, there are possibilities for many different professional pursuits.

“Studying religion trains students in critical thinking, reading and writing. My classmates and I feel that we have developed an understanding and cultural awareness that is necessary to work with other people.”

U of T’s department for the study of religion, in the Faculty of Arts & Science, drew increased attention during the pandemic as people felt lonely, isolated and more introspective than usual. That includes everything from popular joint courses on the history of plagues to courses about happiness – even student-focused websites designed to promote well-being.

Patel says the department’s tight-knit nature was on full display during COVID-19.

“The pandemic was very stressful, but a lot of support systems were in place for me as a student in my department,” Patel says.

She recounts how during Christmas, the department sent her a gift package that included a bottle of maple syrup and a card with pictures of department staff on Zoom screens with little Santa hat filters. “It was one of those small gestures that meant so much to me – to know that there’s this community of people who will support me through the pandemic, and to know that they’re helping many other students in different ways, too.”

Patel has attempted to return the favour to the university. She was keenly involved in student life at Innis College, where she served as vice-president, social affairs in residence during the pandemic. She also poured herself into research on everything from depictions of pleasure in 18th-century Gujarati literature to the relationship between yogic powers and religious authority in Hindu tradition.

But her most indelible contribution was founding the Religion Undergraduate Student Association (RUSA) in her second year at the suggestion of Associate Professor Jennifer Harris. The association is credited with strengthening connections within the department for the study of religion.

Of course, building a new student group from scratch was no easy task. Patel recalls the group’s early meetings, which only drew a handful of people. “For our first event, we ordered two dozen donuts and only one person showed up, and he sat there for a little while out of pity,” Patel says.

Yet, RUSA gradually picked up momentum and went on to become “the heart and soul of my undergraduate experience,” says Patel. It has since held competitive elections and attracted 70 registrants to a virtual conference. The group’s outdoor bubble tea socials have been a particularly huge hit.

Pamela Klassen, chair of the department for the study of religion, describes the social as “an amazing gathering that brought together undergrad students, professors and staff in a way that I had never previously encountered in my almost 25 years as a professor in the department.”

RUSA’s impact on the department also extended beyond the social realm. The group was invited to the Faculty Club for an undergraduate curriculum retreat, where students were invited to present their feedback and ideas on course offerings and curriculum. 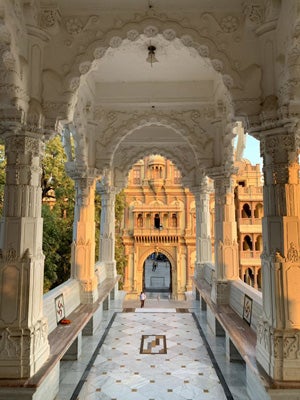 Patel says the enthusiasm and willingness of faculty to cater to students’ interests is a hallmark of the department. For example, in her second year, Patel emailed two faculty members she had never met – Associate Professor Ajay Rao and Assistant Professor Luther Obrock – to enquire about opportunities to study Sanskrit, as there were no courses on the ancient language in the timetable. Rao promptly set up a summer Sanskrit class; he and Obrock also gave Patel access to other Sanskrit education opportunities, including an intensive virtual Sanskrit immersion program. “They opened the doors to many opportunities that I’m grateful for,” says Patel, who went on to become a Sanskrit tutor.

Patel also cites Elisa Freschi, an assistant professor in the department of philosophy and a scholar of Sanskrit philosophy, as a big influence. “She was kind, compassionate and always willing to engage in academic discourse – not just to share her perspective, but with a genuine willingness to learn from everyone,” says Patel, “which is something I really want to take from her as I move forward.”

For Patel, the study of religion offers useful lessons to students in any discipline. She cites one verse from the Bhagavadgītā that resonated especially strongly with her:

(Learn the knowledge about the Ultimate by adopting humility, engaging in inquiry and dialogue, and service to the guru

Patel explains that the verse can interpreted as laying out the characteristics of a good student.

“She reveres her teacher, classmates and the material; she asks questions, is curious and engaged; and she renders service to her teacher – which, for me, entails humility and also extends to serving the community by sharing what she’s learned,” Patel says.

Patel’s desire to share knowledge has already extended well beyond campus. She recently taught a class about ancient Indian civilizations to Grade 4 students and has illustrated a children’s book that translates Gujarati folk tales into English.

Going forward, she hopes to develop her acumen as a scholar and public communicator at the University of Chicago, where she will pursue graduate studies in the Divinity School on a full merit scholarship.

“Nothing is more exciting to me than being in a university setting around so many brilliant minds who can inspire me to see something that I find interesting in different ways,” she says.