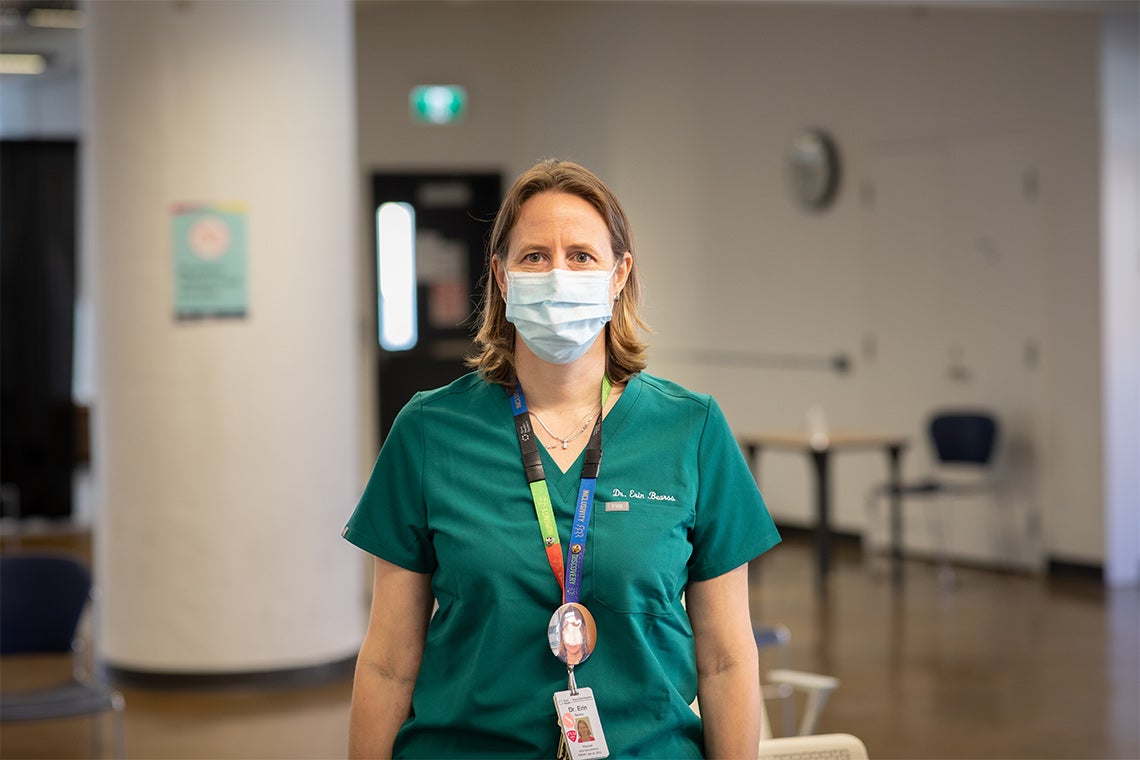 Erin Bearss, chief of family medicine and an ER doctor at Mount Sinai Hospital, is pictured last spring in the vaccine clinic at U of T's Exam Centre, which is operated by University Health Network (Photo by Johnny Guatto)

Chief of family medicine and an ER doctor at Mount Sinai Hospital, Bearss helps run a vaccine clinic – operated by University Health Network, with significant participation by Sinai Health and University of Toronto clinicians, administrators and faculty – that’s located in U of T’s Exam Centre on McCaul Street.

The McCaul Street clinic re-opened its doors on Dec. 19 (it was previously in operation from March through September last year) and has since delivered roughly 1,500 shots a day and will soon surpass the 30,000-mark. Appointments can be made online through the provincial booking system.

More than 23 months into the pandemic, Bearss said it’s disappointing to see case counts at record highs, but stresses that her staff remain eager to get shots in arms.

“As soon as it became apparent that there was going to be a demand for boosters and that our clinic was going to be needed again, everybody was right back in there putting their hand up, wanting to help out,” said Bearss, an assistant professor in U of T’s department of family and community medicine in the Temerty Faculty of Medicine.

She spoke to U of T News while she was self-isolating after family members contracted the virus and were experiencing mild symptoms.

“Anyone who visits our clinic will be impressed with the efficiency, processes and organization and what have you – and that’s in large part due to the people who are here day in and day out.”

The McCaul Street clinic – which will be the subject of an upcoming art exhibit – follows the vaccine eligibility criteria and ethical guidelines set by the province. In recent weeks, staff have mainly been delivering booster shots, but have days reserved for children aged five to 11 receiving their first or second dose.

U of T is also offering COVID-19 vaccinations at the Discovery Pharmacy at the Leslie Dan Faculty of Pharmacy, where members of the U of T community who do not have an Ontario Health Card – such as international students – can register for an appointment. U of T Scarbough is hosting a testing centre on its campus.

From March to September last year, roughly 56,000 people received their shots at the McCaul Street clinic. The university also hosted a large vaccine clinic at U of T Mississauga in partnership with Trillium Health Partners and Peel Public Health last spring, a regular pop-up clinic at U of T Scarborough in partnership with Scarborough Health Network and several pop-up clinics across the city, delivering hundreds of thousands of additional doses. There were also special pop-up clinics that allowed Indigenous community members to get their doses in a culturally safe space.

The ongoing immunization drive at U of T is a co-ordinated effort involving faculty and students in the Temerty Faculty of Medicine, Lawrence S. Bloomberg Faculty of Nursing and Leslie Dan Faculty of Pharmacy. Actors from the standardized patient program, which provides patient simulations for students in health-care fields, work as clerical staff.

U of T pharmacists, pharmacy students, along with pharmacists and technicians from hospital partners belonging to the Toronto Academic Health Science Network, work behind the scenes to prepare vaccines at the McCaul Street clinic. They also supported a low-barrier, one-day vaccination clinic recently at Zanzibar Tavern, an adult entertainment nightclub on Yonge St. As part of a pilot project, the pharmacy team prepared vaccines at the McCaul Street clinic – where there was more space – and sent the doses to Zanzibar using a specialized courier service.

“The University Health Network team wanted to use our pharmacy team as a way to try this model – to see if it could be an efficient and effective way to get doses mass produced and safely transported to another nearby site,” says Linda Dresser, an assistant professor in the Faculty of Pharmacy. “We were there in the background, as pharmacy often is – the cog that makes the magic happen out front.”

The demand for shots at Zanzibar exceeded expectations, with a line that at times stretched from the front door to Yonge-Dundas Square. Although they only planned to prepare 800 doses for that day, the pharmacy team ended up making 1,100, Dresser said.

“It resulted in, sometimes, a little bit of catching up to do … but everybody was very patient, and more people got vaccine that day than we had planned – so that was all good,” Dresser said.

One upshot of organizing the vaccine clinics has been the opportunity to collaborate with faculty and clinicians across U of T and Toronto-area hospitals, Dresser added.

“The university will be richer for this whole endeavour that we’ve gone through, and faculties that maybe haven’t collaborated in such a way before now have something they can draw on again in the future.”