(Not) as seen on TV: Why one U of T entrepreneur balked at a Dragon's Den deal in favour of 'organic' expansion 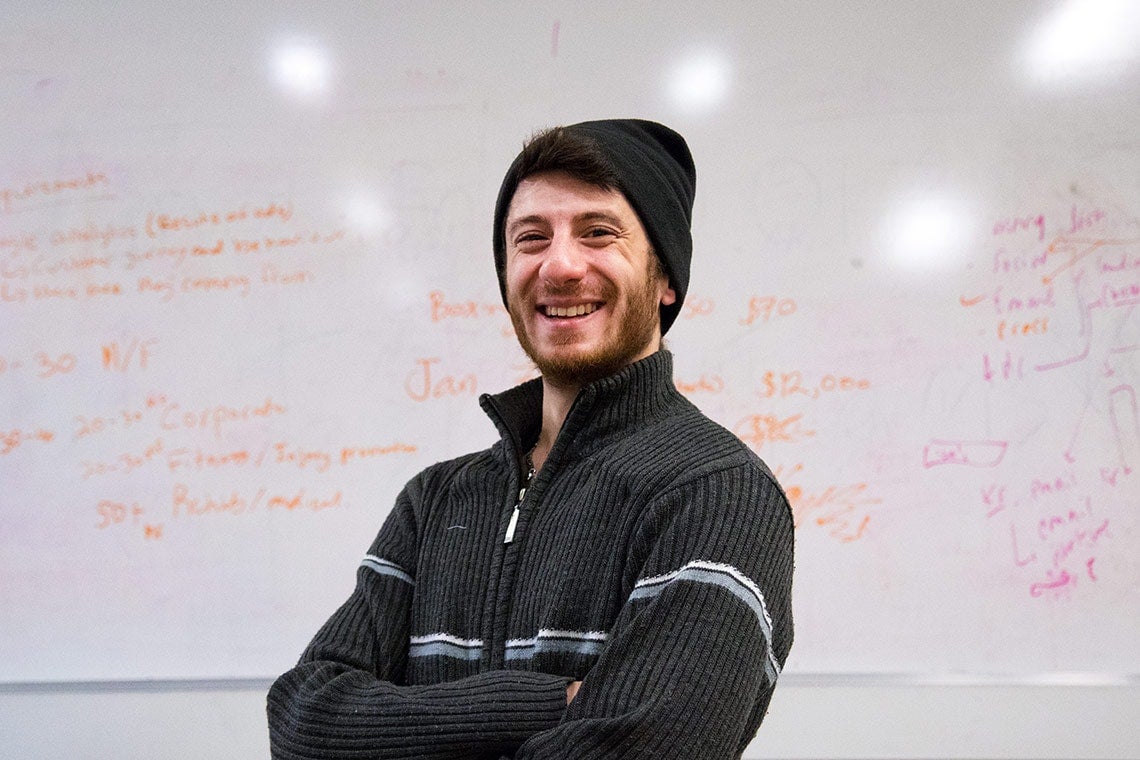 Noureddin Chahrour, a U of T alumnus, is preparing to launch his startup's latest posture-enhancing garment, a sports bra, with a Kickstarter campaign just in time for the post-holiday gym rush (photo by Chris Sorensen)

Noureddin Chahrour’s successful 2015 appearance on CBC’s Dragon’s Den was a key turning point for his research-based startup Adrenalease Posture Apparel – but not in the way you might think.

Chahrour, a University of Toronto alumnus, agreed on-air to hand over 30 per cent of Adrenalease, which makes posture-enhancing garments, in exchange for $90,000 from three of the program’s panel members.

However, he later backed out of the deal after advisers at the Impact Centre, one of nine U of T entrepreneurship hubs, suggested he was selling himself short.

“They said I would be crazy to give up that kind of equity,” says Chahrour, who received a bachelor’s degree with honours in kinesiology two years ago.

Fast forward two years and Chahrour is not only still in business, he’s preparing to launch Adrenalease’s latest product – a posture-enhancing sports bra – with the help of a Kickstarter campaign.

Adrenalease’s sports bra, like its previous T-shirt and tank top, is equipped with adjustable, Velcro straps that pull a user’s shoulders back into an upright position, helping promote muscle memory and better posture. The design is based on research that shows better posture can help reduce stress and pain in the shoulder and neck area. In hindsight, Chahrour says walking away from the Dragon’s Den deal was the right decision for both Adrenalease and himself. It gave him more time work with the Impact Centre to hone his business plan and focus on growing Adrenalease organically. “Every single dime and dollar we’ve made through sales we’ve put back into the company,” he says.

It also gave him the opportunity to listen to Adrenalease's customers and incorporate their feedback.

One message he heard loud and clear: Women liked the product, but wanted something less bulky – like a sports bra – to wear at the gym or beneath regular clothing. There was just one problem. Chahrour didn’t know the first thing about designing a bra, which he says is “perhaps the most complicated” garment to make.

“With a shirt, seven sizes fit mostly everyone in 90 per cent of the population,” he explains. “But with a bra you have to factor in cup size, shoulder size, chest circumference – there’s so many different measurements and variations.”

Chahrour leaned heavily on the female members of his 10-person team for guidance. Together, they ended up creating more than a dozen prototypes before hitting on the right mix of function and form.

“It was women designing products for women,” he says. Mominah Mohsin (left), a Rotman Commerce student, dresses a mannequin with Chahrour. Mohsin is participating in a marketing internship with Adrenalease (photo by Chris Sorensen)

Chahrour originally got the idea for Adrenalease while studying kinesiology at U of T. Suffering from neck and shoulder pain, he began researching posture braces but discovered “they actually do more harm than good” because the braces do all the work, leaving muscles to wither.

Moreover, Chahrour found most existing posture braces too clunky or cumbersome for everyday use.

So, with the help of the Impact Centre, he built his own solution that was integrated into a T-shirt – and then began exploring how it might improve the performance of athletes.

“I was in my cardio-respiratory physiology class, looking at athletes’ lung capacities and how the breathing mechanism works while running,” he says. “That inspired me to look at different positions of athletes wearing the product while running to see if it has an effect on their breathing.”

The scientific research that underpins Adrenalease’s products hints at Chahrour’s one-time ambition to become a physiotherapist.

But his Dragon’s Den appearance presented him with a fork in the road on that journey, too.

Chahrour says he only had about a week to prepare for the show. That included securing Team Canada ice dancers and Pyeongchang medal hopefuls Paul Poirier and Piper Gilles as models – a move that clearly delighted the panel (a friend of a friend was on the U of T figure skating team with Poirier, who is a fan of the T-shirt).

An even bigger challenge stemmed from CBC’s decision to schedule the taping the day before one of Chahrour’s final exams. In effect, Chahrour was forced to choose what was then an entrepreneurial side project and concentrating on his grades.

“CBC said ‘Take it or leave it,’” Chahrour says when asked if he tried to reschedule. “So I took the risk.” A successful launch of the sports bra promises to dramatically broaden the potential market for Adrenalease. But Chahrour and his team aren’t planning to stop there. Bolstered by a $45,000 grant, they’re now working with U of T’s department of mechanical and industrial engineering to investigate the use of a smart plastic, which could conceivably allow future Adrenalease users to adjust the tension in their tops with a touch of a smartphone.

Adrenalease is also preparing to launch a medical line of garments alongside its current “performance” line. So while Chahrour may have put his physiotherapist dreams on hold, he’s still very much applying his U of T education to the field.

“Now physiotherapists are working with me, selling my product,” he says. “I’m making an impact.”

Read more about U of T Entrepreneurship