‘No one left behind’: U of T Run Club takes community building in stride 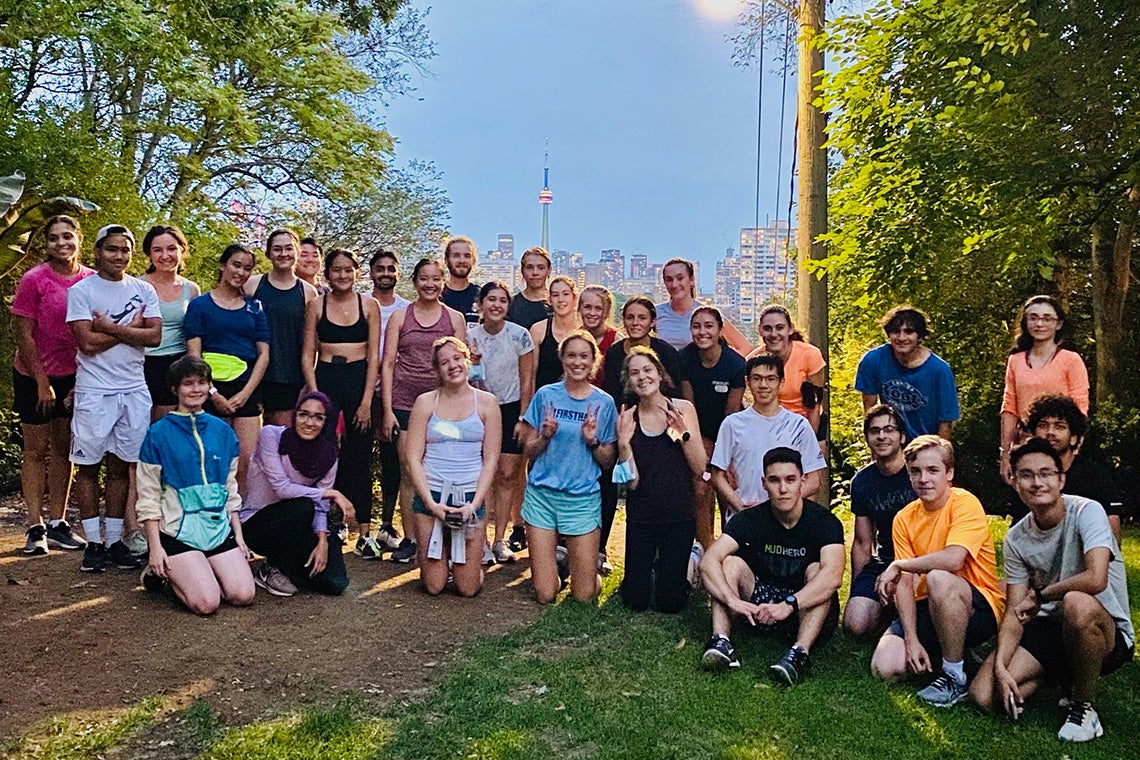 The University of Toronto Run Club upholds their motto – “no one left behind” – every single time its members lace up their sneakers.

With stops at coffee shops and ice cream parlors across the city, co-presidents Emily Nguyen and Ashim Bhattacharya make it a priority to promote an inclusive community where runners of any ability feel welcome to join.

They even take the somewhat unusual step of mixing novice and seasoned runners together in the same groups.

“The most important thing we can do is try to create an environment where people aren’t feeling excluded,” says Bhattacharya, a master’s student in pharmacology from New Jersey who joined the club about three years ago to meet new friends.

Growing up, Nguyen practised ballet but took up running after she moved Toronto from Edmonton to attend university.

“I wanted to apply my athleticism from ballet in a new area,” says Nguyen, who is now studying medicine in U of T’s Temerty Faculty of Medicine.

The pair became co-presidents of the club in the summer of 2020, when most clubs and social events were on pause because of the pandemic. They began organizing runs in 2021, navigating shifting public health guidelines.

“Ashim and I, both being health science students, were very public health focused,” says Nguyen.

In addition to putting in place measures to keep members safe, the co-presidents plan and test routes, lead the runs and manage the club’s Facebook and Instagram accounts. 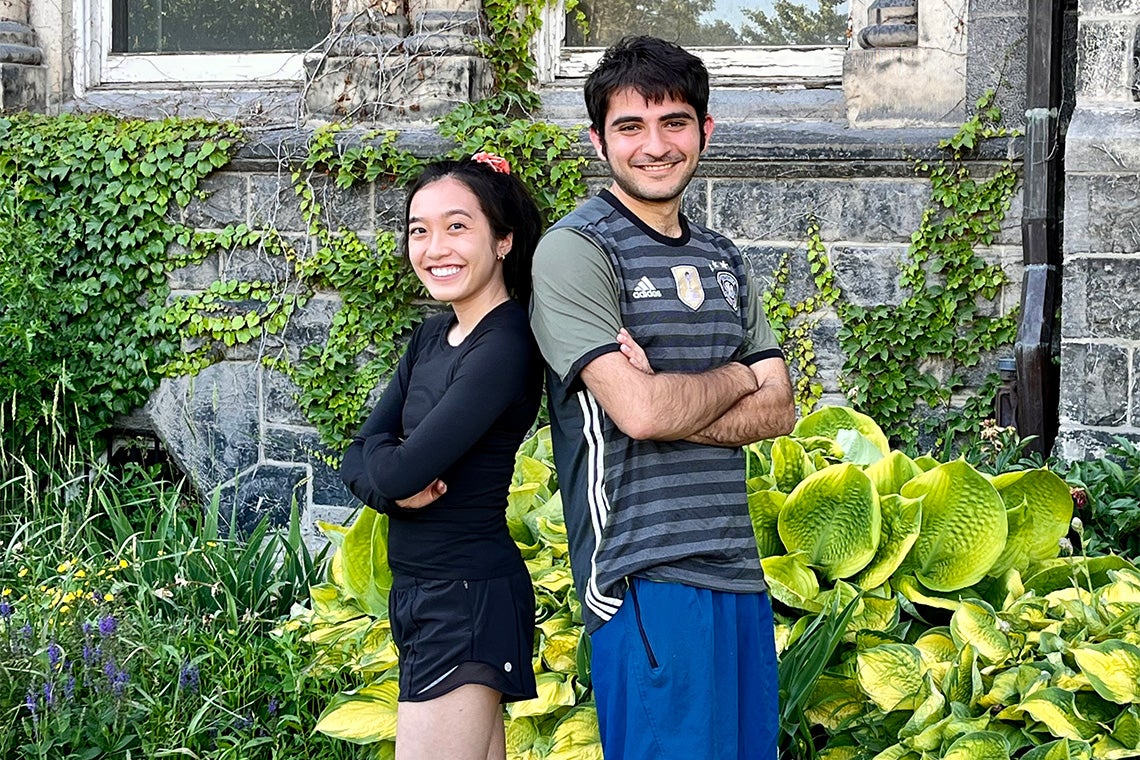 Nguyen says the club has seen tremendous growth over the last 10 months due to word of mouth and social media – and, for the first time, is continuing operations throughout the summer season. In the most recent academic year, the club held 72 runs for more than 300 undergraduate, graduate and professional students from across the university.

Ishika Bangari is one of those runners. An undergraduate student specializing in astrophysics in the David A. Dunlap department of astronomy and astrophysics in the Faculty of Arts & Science, she heard about the club through a friend and thought its Instagram looked “super cool.”

Although Bangari has run competitively in cross country and track and field since middle school, she wanted to keep it casual when she moved to Toronto – so the U of T Run Club seemed like a perfect fit.

“I’ve gotten to know Toronto more as a city because of the different routes they pick,” she said. “My course load is so demanding. Run Club gives me an opportunity to step outside of campus.” 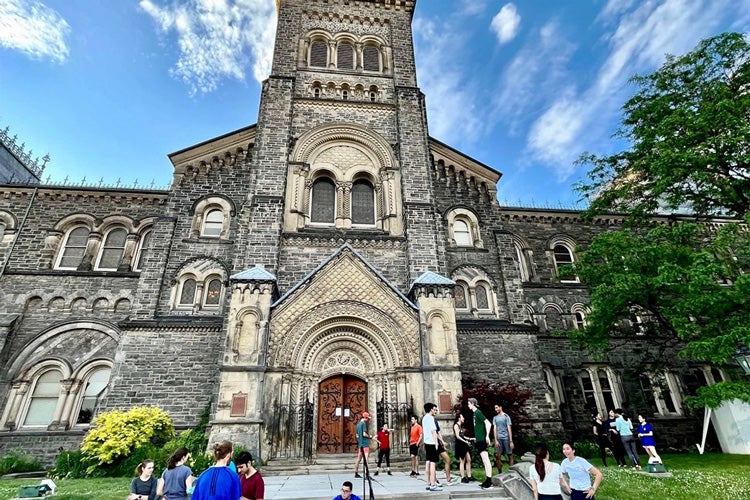 From High Park to the Beach and coffee shop and eateries in between, Bhattacharya and Nguyen plan five-kilometer routes twice a week. In the summer, the group meets at the steps of University College on Wednesdays and Friday. On the weekends, they frequently plan longer routes and special events.

“Doing a lot of runs that don’t start in downtown Toronto has allowed us to explore the city more,” says Nguyen.

The club’s six-kilometre run through the Beach (or Beaches, if you prefer), explored Woodbine Beach Park, Ashbridge’s Bay Park, the Boardwalk and Woodbine Park. For the fall and winter semester, they planned routes that ended at different cafes. And they kicked off their food series for the summer with a route that took the group through Trinity Bellwoods Park and ended at The Big Chill for ice cream.

“A lot of people loved the event,” Nguyen says. “Somebody asked me if we could have ice cream after all our runs.”

As for the actual running, participants are split into three groups with a run leader to ensure the pace stays around 6:00 to 6:30 minutes per kilometer.

“We always make sure to check the back and communicate with each other,” says Nguyen.

Bhattacharya notes that the club’s approach deliberately avoids splitting people up into groups based on their pace. 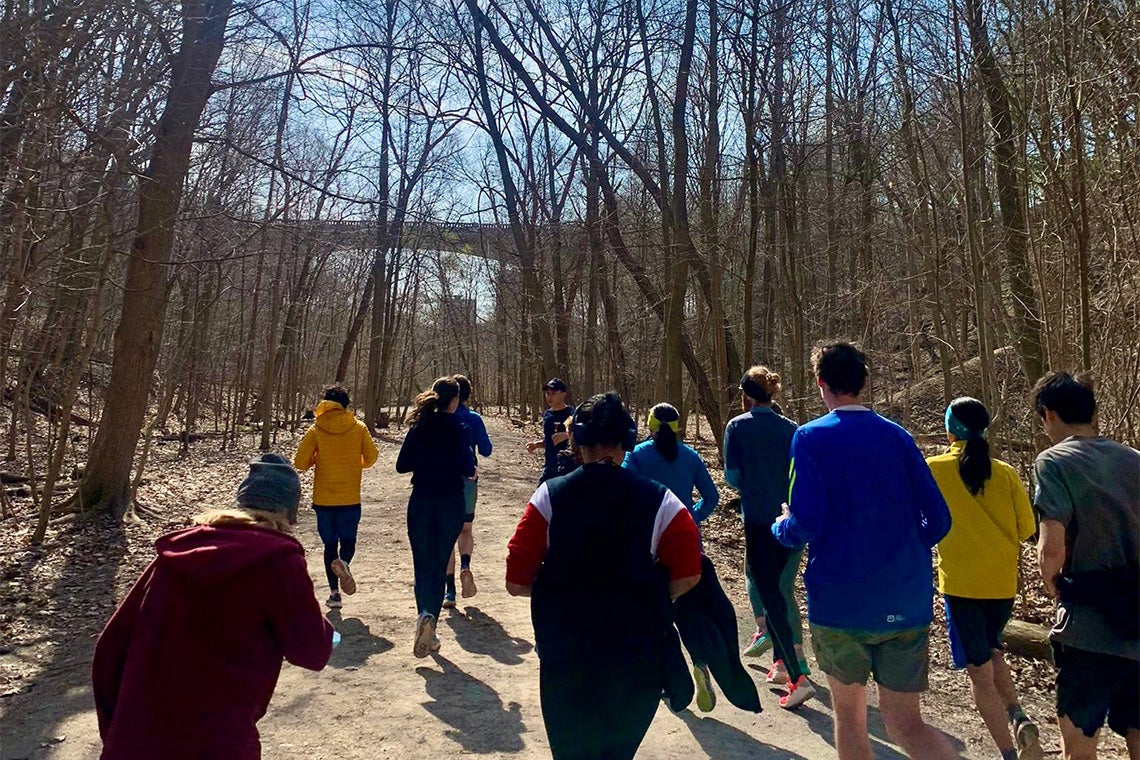 Members explore the Moore Park Ravine during a run. To maintain its inclusive atmosphere, the club eschews the idea of organizing participants by pace (photo courtesy of U of T Run Club)

The community and social aspect of the club is something Nguyen and Bhattacharya say members value.

“It’s been really great to see some of our runners who haven’t had running experience come and form friendships, healthy habits and be able to achieve their goals,” says Nguyen, adding that the activity has also had a positive impact on her mental health.

“When I go to the runs, I put all my school aside. I’m in the moment with my peers, enjoying the run, the fresh air and taking in the sights of the city.”

Bangari, too, has formed friendships through the club – even joining Midnight Runners, another local Toronto run club, with another member.

Bhattacharya, for his part, says a particular highlight is watching friendships being formed through the club he helped organize.

“It’s one thing to show up and run, but it’s another thing to hang out and do something after it.”